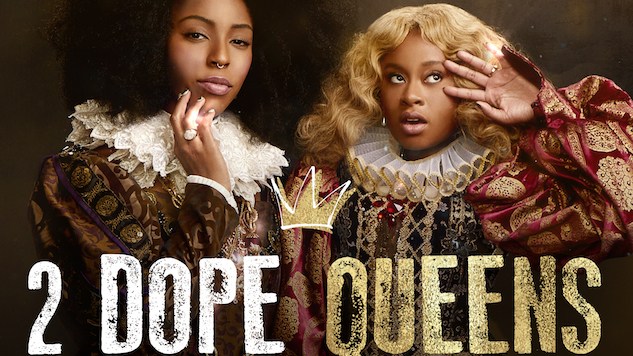 Review: The playful comedians, who have been performing together for three years, won over a cranky bunch of writers at the Television Critics Association by playing with the questioners’ names — Jackie, Neil, Dan and telling a Whitney, “Don’t neg yourself” — as they described their podcast and how it will play on HBO.

Asked how they met, Robinson quipped, “On Tinder.” Then she turned to Williams. “Wouldn’t it be cute if we met on Tinder?”

In reality, Williams got in touch with Robinson for a piece when she was working as a correspondent on The Daily Show. She expressed an interest in stand-up, performed at Robinson’s  live comedy show, and a partnership was born.

It was “a super-sexy one-night stand, but then we put a ring on it,” Robinson said.

The women want the shows to be a comedy and storytelling platform for women, people of color and LGBT performers, but say their performances are for everyone, touching on such universal topics as dating, living in New York and racism.

“People think if a project is created by a person of color or women, it’s just for that” group, Robinson said. “This is relatable to everyone. I don’t think white guys sit home and think, ‘I wonder if women get my sense of humor.’ “

The comedians tackle favorite topics, ranging from nerdiness to hair. (“Hair and black women are like PB&J,” Williams says.)

“Growing up as a person of color in the suburbs, all I wanted to do was play The Simsand read Harry Potter,” Williams said. Black friends “said that I was a nerd and acted white. There’s such a variety of black people and we’re all into different things. … It’s progress for us to be able to nerd out.”