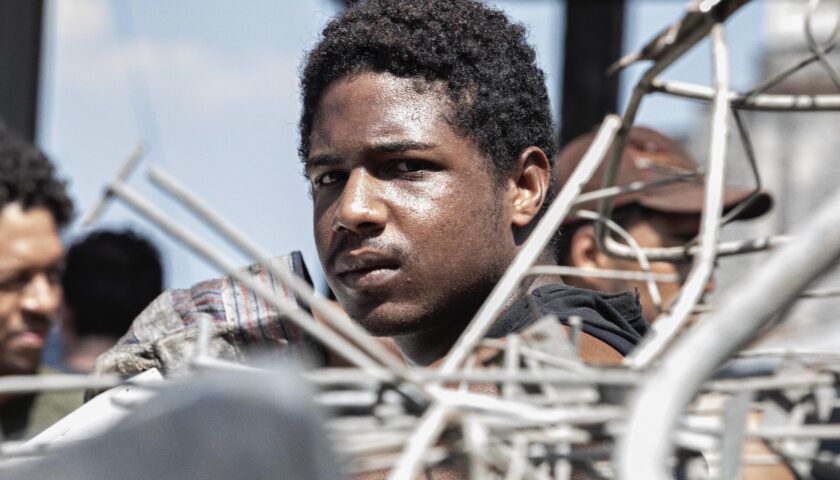 A harrowing Brazilian hostage thriller wrapped inside a mercilessly harsh coming-of-age story, the second feature by filmmaker Alexandre Moratto (“Socrates”) hinges on the moral dilemma that confronts a poor 18-year-old farm worker after he trades the outskirts of Catanduva for the big city of São Paulo in order to send money back to his ailing mom.

The kid’s name is Mateus (“Socrates” lead Christian Malheiros), and he’s a rock-solid human who would do anything to support his family. It’s with evident reluctance that Mateus has agreed to leave home, and he winces when his mom presents him with a new shirt for the occasion — she could’ve bought an entire month’s worth of groceries for the same amount. Mateus is more accepting of the protective necklace she gives him for good luck, and the aviation magazine that his little sister offers with a similar degree of ceremony; with big dreams and a good head on his shoulders, there’s no telling how high he might fly. The man who picks him up promises Mateus’ mom that her son will make her proud.

Our hero and the three other boys in his van are dazzled by the skyscrapers that dot the streets of São Paulo, but their ascent runs into some rather severe turbulence once the kids arrive at the factory lot where they’ll be tearing rubber off copper wire by day and sleeping in a filthy dormitory at night. It’s warning light after warning light from the moment they meet their small-time gangster of a boss, Luca; he’s played by scruffy heartthrob Rodrigo Santoro, whose menacing performance suggests a beautiful garden overgrown by poisonous weeds. Luca is big on “talking about paychecks later” and “flashing the bulky pistol he carries in his back pocket.” When Mateus — whose eighth grade education and moral fiber make him the new hires’ de facto leader — insists that he’s only interested in doing honest work, Luca jokes about checking in with HR.

The situation deteriorates quickly from there, as workplace is usurped by the language of human trafficking.  Luca locks the boys in the junkyard, and insists that he’ll only let them out once they pay the “debt” they owe him. Try to escape and he’ll kill their families, run to the corrupt local cops and they’ll be pistol-whipped for their insolence. Suddenly, the skyscrapers don’t resemble opportunity so much as the gates of an insurmountable prison cell.

But Mateus is no mere country bumpkin. On the contrary, he’s the Andy Dufresne of trafficked Brazilian teens, and his mind for contract language soon forces Luca to recognize him as manager-level material. Less than a month after being locked up with his new friends, Mateus finds himself holding the key to their cell. He wants to help the other boys, yet he knows that rising through the ranks of Luca’s criminal enterprise is the only way that he’ll ever be able to meaningfully provide for his mother. Mateus is a smart kid, but he has a lot to learn about the line between self-preservation and complicity, and the tests awaiting him get harder every day.

7 Prisoners” is mostly powered by the natural tension of its premise, which is simple and gripping and develops along a linear arc from bad to worse. Moratto’s unfussy but visceral direction chokes every scene with a feeling of the walls closing in on all sides, just as the script he co-wrote with Thayná Mantesso latently emphasizes the lack of choice available to its characters (Luca included, perhaps). Malheiros’ performance maintains some of the blankness that’s often implicit to stories about young people reckoning with their agency for the first time, but the actor so vividly embodies the relationship between power and responsibility that his most ruthless choices become doubly agonizing because of the violence they inflict on his own sense of self.

There isn’t much more to this lean and satisfying movie than that, but Moratto complicates the central dilemma with the skill of a master dramatist. The latticework of tensions that form between Mateus and the other workers are simple but keenly felt, and the second half of “7 Prisoners” makes good on its title by expanding the cast in a way that tests Mateus’ mettle in the most urgent manner imaginable. But its his relationship with Luca that ultimately gives the film its legs; unexpected detours into the gangster’s life inspire understanding as to how he got here, if not quite empathy for the man he’s become.

There are moments down the final stretch when the case could be made for calling this movie “6 Prisoners,” and others when “8 Prisoners” would seem to be a similarly fitting title. Its to Moratto’s immense credit that he lets us do our own math, the writer-director eventually bringing this story to a close with an unsparing honesty that refuses to insult all the other kids in Catanduva who are waiting for their chance in São Paulo, a city that waits for no one.