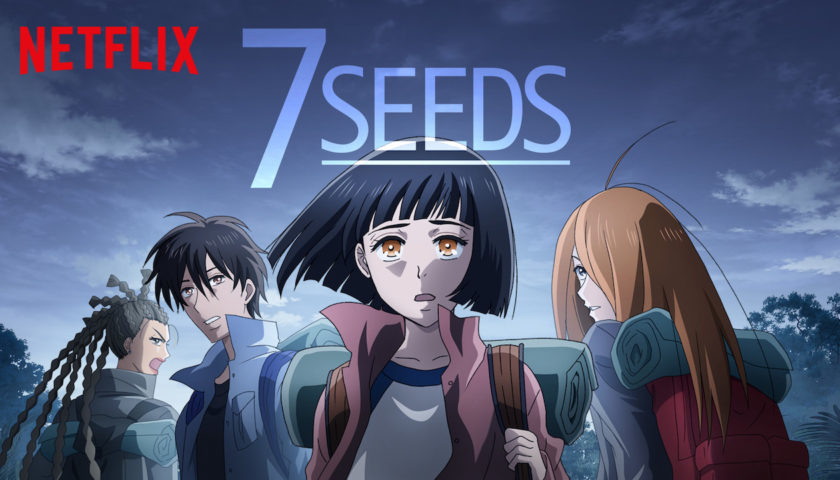 Review: 7Seeds is a series I’ve been intrigued by for a while. Having not read the original manga, there’s been a lot of buzz online recently about this adaptation, with concerns around whether the story would live up to expectations. Split across 12 episodes, 7Seeds gets off to a good start across its first part, with some intriguing character development, a good use of flashbacks and a continuing evolution of the mystery surrounding the project and group. Unfortunately the art style and animation does feel dated and leaves a lot to be desired.

The story begins with young Natsu waking up along with a handful of other people on a mysterious island. With admittedly rushed characterisation, they soon learn of a meteorite that hit Earth and caused the world to launch their fail-safe project; the 7Seeds program. With murderous giant insects having evolved thanks to the changed climate, the series sees the group adjust to their new surroundings whilst trying to work out exactly what’s happened to the world since they left it.

From here the group learn they’re known as Team Summer B, thanks to their guide, and as they explore this brave, new world they realize they may not be alone. As the reality starts to become clear, 7Seeds sees the group learn more about the other survivors they eventually find and the truth around what’s happening. Of course, with this being Part 1, the story is left open for future additions to be added but what’s here should be enough to whet the appetite and return for part 2.

Early on, you’d be forgiven for thinking this was an anime adaptation of Lost, with the survivors finding monsters and even a bunker full of food in the middle of the island. I’ll admit, I did think the series was going this route until a few well-timed plot twists threw this theory out the water. 7Seeds does well with its characters and interactions between the group too. Although early on the series this is a little heavy-handed, the later flashbacks showing their previous life and slightly slowed pacing does well to build the characters up and empathise with certain members of the group. There’s a nice dynamic between them all too, with some of the latter episodes splitting the group up and offering different perspectives of the world.

Unfortunately the visual style of this anime will either make or break the enjoyment for you. The eyes feel emotionless, some of the animation is incredibly choppy and a few of the lines early on aren’t lip synced that well either. Visually, 7Seeds feels very dated for what it is although some of the backgrounds are painted with enough detail and splendor to look past this a little.

Of course, in true anime fashion, Dragon Ball Z remains the only one where I believe the English dub is better than the original. 7Seeds’ dub doesn’t do the anime any justice, and worse, elaborates on the subtitled text to offset the pacing of the show. For avid watchers of anime, watching it in the Original Japanese with subs is going to be the default setting anyway but for everyone else, this is worth pointing out.

7Seeds is a hard one to nail down, even more so given I haven’t read the original Manga. The story is well paced, the characters develop well and across the 12 episodes the constantly evolving mystery and illumination on the past help to flesh out this changed world. Unfortunately, the visual style leaves a lot to be desired and the animation itself really holds this back from being a better title. It’s not the ugliest anime out there, but it’s certainly a far cry from the aesthetic beauty of something like Violet Evergarden.

Quite where 7Seeds will go with its second part remains to be seen but for now there’s enough here to make for an enjoyable anime, if you can look past some of the visual flaws and early hiccups in the series.