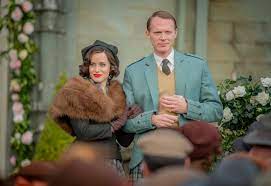 It’s a little difficult to understand why the story of Margaret Campbell, the Duchess of Argyll, was one worth dramatizing – or, at least, why it was dramatised in this particular way.

A Very British Scandal charts the burgeoning relationship and eventual deeply hostile divorce between Ian (Paul Bettany) and Margaret Campbell (Claire Foy), the Duke and Duchess of Argyll. The divorce itself was one of the most heavily publicised of the 20th century, attracting fervent media attention because of both its novelty and its salaciousness: the Duke accused his wife of adultery and insisted that the Duchess had had relations with as many as 88 other men.

As evidence – and the chief reason why Argyll v Argyll lodged so firmly in the public imagination, notorious then and remembered now – the Duke presented intimate polaroids of the Duchess with another man, stolen from her Mayfair home. (In real-life, Campbell hired a locksmith to acquire the photos, though in writer Sarah Phelps’ account he breaks in himself.) Crucially, the other man couldn’t be identified from the photo, prompting waves of speculation as to who he might be; potential candidates included movie stars and prominent politicians, which served only to heighten the level of popular interest in the Argyll divorce.

With that in mind, it’s no surprise the already acrimonious Argyll divorce presented itself as a potential follow up to 2018’s A Very English Scandal. Comparisons between the two often largely aren’t particularly useful – though nominally an anthology, it’s clearly a very loose one, and the two dramas share little in terms of style and tone. Where the earlier series was irreverent, this one is austere, leaving Sarah Phelps’ sequel to Russell T Davies’ series feeling very distinctly its own piece. Both however are about shame and sexuality, and those shared themes tie the two together.

A Very British Scandal falters somewhat in how it approaches those themes though. Much about the divorce and this ensuing adaptation feels bracingly straightforward, particularly as the series focuses on the relationship between the Duke and Duchess. The depiction of the marriage itself is at times quietly well-observed (Foy and Bettany perform the initial cracks in their characters’ relationship particularly well) and at others clangingly unsubtle (the Duke’s brief interest in collecting insects, driving a pin through a butterfly as the Duchess bangs on a locked door, is loud in easy symbolism).

What made A Very English Scandal work as well as it did was how it argued a new perspective on the Jeremy Thorpe affair, positioning shame as a sort of social violence far in excess of the attempted murder at the heart of the trial. It’s not as clear what A Very British Scandal is aiming for. It doesn’t exactly play out as an emphatic validation of Margaret Campbell’s sexuality (limited, perhaps, by coronavirus restrictions during filming), nor did it delve as deeply as it perhaps might have into the psychology of the marriage itself.

It also too closely mimics the structure of its predecessor, leaving the divorce trial largely to third part of the miniseries; when the case concludes and the credits roll, it feels like A Very British Scandal has ended before it even really began. There’s a sense that perhaps all of Argyll v Argyll’s most interesting implications happened after the divorce, and that this drama’s interest in the media and social response might have been better served by moving the trial to the second episode, and devoting the third to exploring its consequences. It never quite convinces that this divorce was a worthwhile lens through which to make a broader comment, ultimately feeling like the subject matter was chosen for its name recognition alone.

The performances are strong throughout, certainly. While another aristocrat seems a superficially obvious role for Claire Foy, the difference in emphasis and perspective here draws out shades and nuances that set her performance here apart from her work in The Crown. Meanwhile, Paul Bettany as the volatile 11th Duke of Argyll is a world away from his more genial turn in WandaVision earlier this year. Still, it’s hard not to wish the pair had been pushed a little further – A Very British Scandal gestures at class tensions and moral panics, but each idea it raises almost always needs that little extra push.

Ultimately, A Very British Scandal is quite a matter-of-fact piece, more staid and sedate than its predecessor. In a way, it feels oddly weightless: for all the good work that Foy and Bettany do, the series never quite manages to demonstrate that the Argyll divorce has a dramatic significance beyond its historical notoriety.