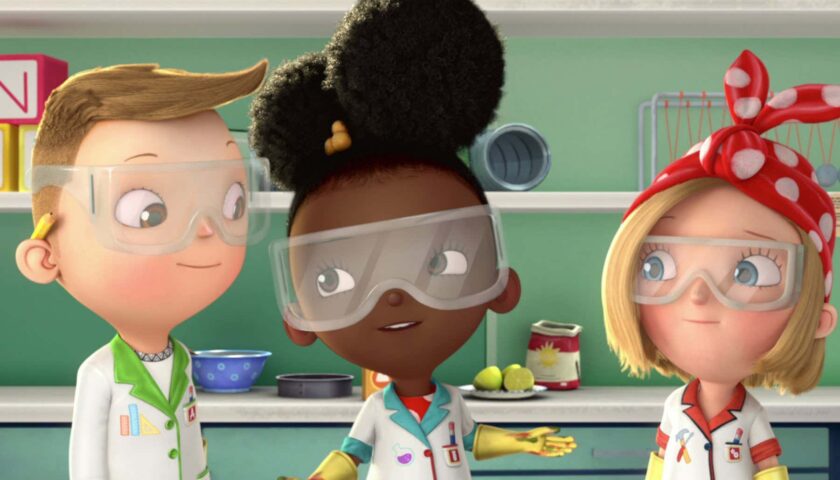 Based on Andrea Beaty and illustrator David Roberts’s bestselling picture book series, the creatives behind Ada Twist, Scientist always knew that their Netflix adaptation would have a lot to live up to. Thankfully, a brilliant team has been amassed to bring the animated show to life.

The company behind the six-episode first season is Higher Ground Productions, which just so happens to be run by former US president Barack Obama and former first lady Michelle Obama. Each half-hour installment of Ada Twist, Scientist was developed by Chris Nee, the brain behind the adored children’s television series Doc McStuffins, Ridley Jones and Vampirina. The result is 12 short science lessons that everyone can learn from.

The show follows 8-year-old Ada, who is infatuated with science and figuring out how it makes the world work. Alongside her best friends Iggy Peck and Rosie Revere, as well as her mum, dad, older brother Arthur and mischievous cat Mooshu, Ada asks endless questions, goes on various fact-finding missions and creates elaborate scientific experiments.

While all of the above might tempt you to think that Ada is just a little annoying, that couldn’t be further from the truth. Thanks to Amanda Christine’s superb vocal efforts, Ada’s curiosity is genuinely contagious. More than that, she injects an energy and enthusiasm into the show that will instantly engage younger viewers and provoke a smile from even the most jaded parents.

It is easy to see why the Obamas were so eager to bring Ada Twist’s scientific shenanigans to a wider audience. When they signed their multi-year deal with Netflix, the pair said that their goal was to use the power of storytelling to inspire people to “think differently about the world around us, and to help us open our minds and hearts to others“.

Ada Twist, Scientist does that from the opening lyrics of its catchy theme song. It asks viewers to always be curious and wonder “How, what, where, why”, before then reminding us that “science is every where you look”.

For the show’s opening episode, entitled A Fort Of One’s Own, this approach sees Ada using household items to create chain reactions that unlock the entrance to Arthur’s garden fort. Throughout this journey, Ada drops various pearls of wisdom. For example, when she, Iggy and Rosie become stuck, she remains upbeat and insists: “The only way to fail is to quit.” Then, she galvanises her pals by reminding them that scientists are only able to resolve the unsolvable by answering numerous small questions first.

Each episode is made up of two of Ada’s animated adventures, which are around 10 minutes long. These are followed by footage of real-life scientists introducing themselves and their professions, then making the scientific elements of their work easy to understand. This includes aerospace engineer Keji Sojobi – who designed the chain reactions on the James Webb Space Telescope to allow it to unfold in space – desert botanist Naomi Fruja, solar engineer Sarah Kantor and biomedical engineer James Findlay.

Though Ada Twist, Scientist is aimed at children, many parents watching along will also also find it informative, educational and a whole lot of fun.

Ada Twist, Scientist will be available on Netflix from 28 September.