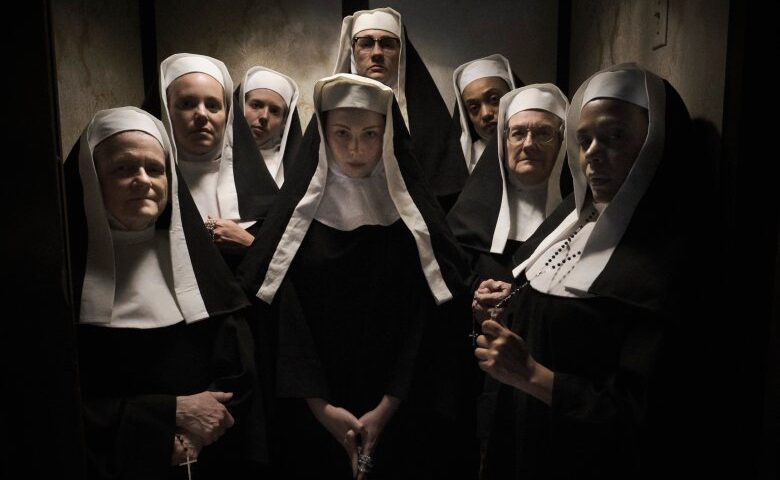 Mickey Reece’s “Agnes” is the kind of wild and wooly indie whatsit that we’re sometimes lucky enough to get from DIY filmmakers who shoot first and question themselves later. Introducing itself as a hackneyed slab of low-budget religious horror — the title character is a demon-afflicted nun who might as well be possessed by the IMDB quotes page for “The Exorcist” — sacred genre tropes soon fray into something less recognizable as Reece’s freeform plotting comes to reflect his film’s poignantly unorthodox relationship with faith. For all of its ruffled habits and bleeding eyes, “Agnes” is far sadder than it is scary (quite, versus not at all), and often sillier than it is sad; the end product more resembles a drive-in riff on “Doubt” than it does anything James Wan has ever made. And yet, I’d argue that nothing in “The Conjuring” or any of its offshoots is as harrowing as the moment when someone in this movie is asked, “Have you ever felt love outside of God,?” and we have to watch them arrive at the answer.

“Agnes” isn’t even a minute old before the opening credits swerve away from the scripture of our expectations. Not the prologue or the title scene, but literally the opening credits, as the old Roman typeface Reece plasters over a musty shot of nuns at mass is suddenly replaced with punky splotches of violet paint when tableware starts flying across the convent dining room and Agnes (Hayley McFarland) begins shouting that her fellow sisters of the cloth “will fucking burn in Hell!” Too hokey to scare anyone, but also not quite broad enough to make them laugh, the destabilizing first reel fake-out does a more important job: It prepares you to spend the rest of the film trying to identify what you’re watching. To think about possession (in all of its forms) not as an evil to be extinguished, but rather as an emptiness to be understood.

The first thing most people will probably figure out is that Agnes isn’t the main character of the movie that bears her name. That distinction seems reserved for the disgraced Father Donaghue (Ben Hall), a cynical priest who might seem to be the prototypical leading man of a story about shaken faiths if not for his natural unease — more weak than weary — and, um, his vague history of molesting young boys. When the leaders of his diocese assign Donaghue to perform Agnes’ exorcism (a kooky scene full of arch laughter, framed by a massive taxidermied lion, and ribboned with semi-ironic gusts of string on the soundtrack), they couldn’t possibly care less that he “doesn’t believe in this medieval woo woo.” Donaghue is being swept under the rug. But that won’t stop him from trying to impart some jaded wisdom to his pious chaperone Benjamin (“The Vast of Night” star Jake Horowitz), a twentysomething still a few weeks away from taking his vows.

Again, it’s best not to get too attached to the doubt versus faith dynamic that Reece and co-writer John Selvidge are teeing up here, but it’s worth paying attention to how they plant their flags. When Donaghue opines that folks are losing their belief in God, and so belief in the Devil is rising, Benjamin replies that “people are just in more pain.” They’re both right enough, so far as the movie is concerned, but it hardly seems worth framing as an argument; more important than good and evil is the shared language of spiritual physics. Loss creates a hollow inside us, and “Agnes” — despite its structural misshapenness and deliberate tonal uncertainty, which ranges from cheeky giallo pastiche to kitchen sink neorealism — is held together by its unwavering focus on the ways in which we try to fill it.

For most of the movie’s first half, “Agnes” feels a hell of a lot less serious than I’m making it sound. Donaghue is pathetic, Benjamin seems totally over his head, the flirty and flustered nuns treat him like a matinee idol, and Agnes herself is a full slab of deviled ham, complete with glam-rock jets of thick black hair. Reece is constantly giving us permission to laugh at things that other movies have played for terror — Bibles locked and loaded, the priests first strut towards Agnes’ chamber in slow-motion like they’re some kind of holy suicide squad — and that’s before these demon-fighters request get some back-up from a strapped priest they see on public access TV (Chris Browning as Father Black).

“Agnes” lacks the style and narrative purpose it needs to sustain all of this seriocomic mishegoss, but Reece appears to be aware of that, and even his most ridiculous flourishes hint at the film’s more emotionally pressing second half. Take heed, for example, of Father Black’s curious backstory, which involves his family making peace with the demon who possessed his sister, and learning to live with it in their home.

And then there’s young Sister Mary (an excellent Molly Quinn), who came to the convent after the death of her infant son, and retains a certain tenderness towards the possessed even after her friend starts vomiting bile; she knows the pain of losing someone, and it will take more than a little black goo around the lips for her to let Agnes out of her life. Mary knows what it’s like to be filled with darkness, and still remembers how our souls abhor a vacuum. This will eventually become her movie, and Mary’s trembling journey back into the secular world of shit jobs and stand-up comics will introduce her to some new faces (including Chris Sullivan and Sean Gunn), reconnect her with some old ones, and help her to shine a scuzzy fluorescent light into the empty cavern that once tried to fill with faith.

“Agnes” may start as a slaphappy pastiche of a particular horror sub-genre, but — like Anna Biller’s “The Love Witch” before it — the film’s veil of irony proves sneakily disarming. In fact, it’s only during the quiet final scene, staged in the middle of a jaundiced diner somewhere, that the open-hearted sincerity of Reece’s storytelling is on full display. This is a movie more searching than settled, and those last moments achieve real power from Mary’s discovery that faith is a neutral force; she may not be able to satisfy the spiritual hunger that her loss has left behind, but she might have the power to choose what she feeds it.