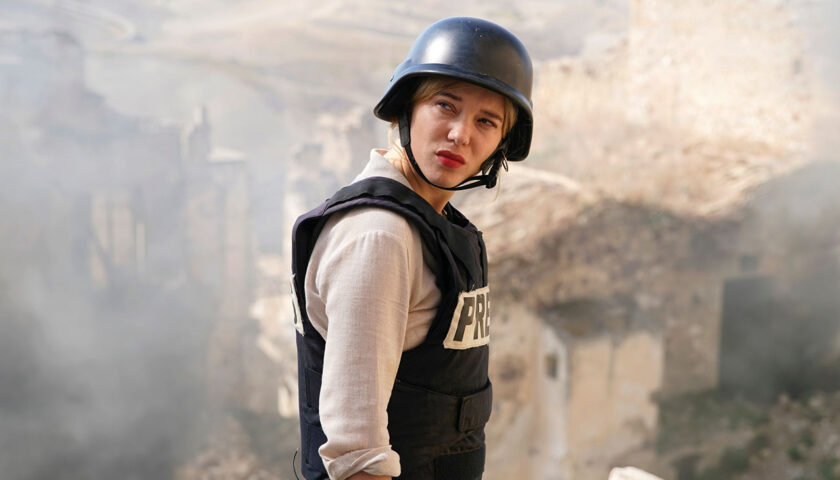 France de Meurs is the most famous TV news journalist in la République. She’s a Gallic mash-up of Laura Kuenssberg, Kirsty Wark and Marie Colvin, as poised in the studio as she is in a war zone. Played by Léa Seydoux, France strides into battle with her platinum hair bouncing and her tight professional smile fixed with pink lipstick. But her success is a fiction, her career built out of spinning lies. The second she starts taking notes on herself, that big TV soundstage risks turning into a pumpkin.

Writer-director Bruno Dumont forged his reputation with small, anguished films about life on the margins, nosing in tight to his subjects to show them warts and all. The fitfully fascinating France has the same ominous air, but it has been freeze-dried and air-conned, perfumed by the wealth of Paris’s wealthier districts. Dumont’s secular crisis-of-faith drama has much to say about the corrosive effect of our 24-hour news culture. But it is also indecisive and compromised and plays out as a prolonged admission of defeat. Stable door, horse bolted. We might see the problems but we’re all a part of them, too.

Judged on her public profile and bank balance, France de Meurs is doing fine. She shares an opulent apartment with her novelist husband and young son. President Macron knows her name and allows her the first question at press conferences. Then, driving to work, she rear-ends a motorcycle courier, Baptiste (Jawad Zemmar), and suddenly finds herself on the wrong side of a story.

The collision is minor. Baptiste is not badly hurt and his mother is overjoyed to receive a visit from Madame France. But the moment is like a blown fuse for France, who now can’t seem to reboot. Her work is toxic. Her marriage is a sham. Even a retreat to the spa does not provide the escape she craves.

Dumont moves his tale at a stately, almost ceremonial pace, deliberately offsetting the frenetic daily whirl of France’s daily rounds. He deserves credit for avoiding easy answers or pat resolutions, the sort of cheap redemption story lesser directors might have grabbed at.

All the same, good heavens, his film contains some crude, lazy moments. At one stage he gives us a narrative twist on the live broadcast format that’s almost as old as the live broadcast itself. Elsewhere, he introduces a late-breaking tragedy that could have jumped fully formed from a supermarket tabloid. This may well have been intended as a piece of sly, self-reflexive satire; that doesn’t automatically mean that it works well on the screen.

As for France, she’s trapped in a loop of collapses and comebacks; an ongoing human-interest story that she can only partly control. In her pristine early state, we see her in war-torn north Africa, directing the soldiers as though they are extras in a movie. Later, accompanying a raft of migrants across the Mediterranean sea, she keeps fluffing her lines and welling up while on camera. In the first scene she’s a journalist; in the second she’s a person. Dumont’s implication is that it’s impossible to be both.