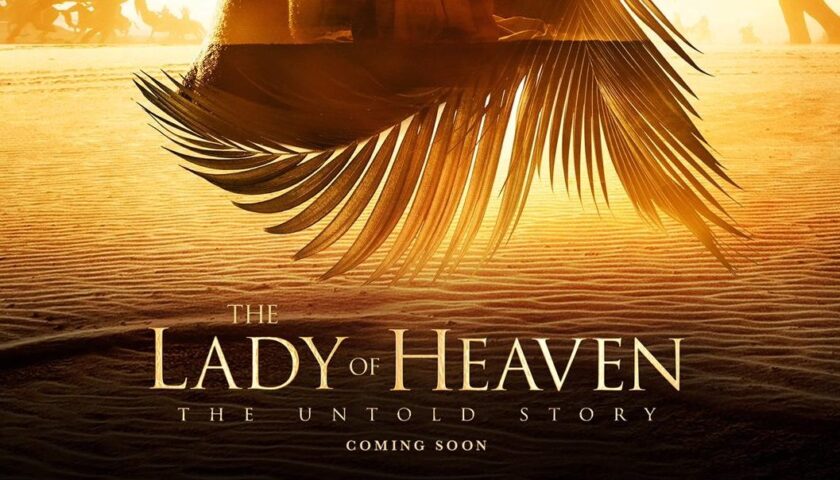 “The Lady of Heaven” is a faith-based historical drama that relates the early history of Islam through a series of bedtime stories a woman tells a little Iraqi boy who’s just been orphaned by ISIS fanatics.

The idea is to use the tragedy of that child (Gabriel Cartade) as a parable for a “different Islam” than the one he’s seeing play out right before his eyes. Laith watches ISIS militants accost his mother over their desire for him to become a “soldier” someday soon, accuse her of heresy and his late father of letting him learn “an infidel’s song” they hear him singing.

Later, ISIS thugs storm into his house and murder mother in front of him. He barely escapes their clutches and is rescued by a soldier (Oscar Salem) who brings him home. To comfort little Laith, the soldier’s mother (Denise Black) tells him of the pious and kind daughter of Muhammed, Fatima, who advocated tolerance, forgiveness and kindness and is presented here as an alternate path Islam might have taken after her father’s death.

The film’s point of view is one we hear often in the West. It’s the argument that ISIS, radical fundamentalists, Saudi Wahhabists and suicide bombers sanctioned by other sects have hijacked Islam and turned it into a global brand for violent intolerance in the name of religion.

The most daring thing about “The Lady” is that is comes right out and makes the case that this “hijacking” happened from the start. Is that just Westernized spin, or does any sober reading of the conflict in which Islam was born show it as preaching “peace and harmony” while waging jihadist invasions and conversion by force of arms?

That’s a fascinating minefield to walk into, because as the flashbacks to the seventh century in mother Bibi’s story make clear, preachers and lieutenants in Muhammed’s retinue proclaim they will “protect all — Muslim, Jew and non-Muslim” when they come to Medina, and the viewer can plainly see that they mean “Except for, uh, the PAGANS.”

Pagans here are depicted as eat-the-hearts-of-our-enemies fanatics hellbent on smothering Islam in the crib. As the Arab-on-Arab religious wars begin, violence all but takes over a movie about “The Lady of Heaven.”

We see Muhammed’s movement come closest to collapse in the Battle of Uhud, where single combat with a Goliath-sized giant is just the opening salvo, and his soldiers lose heart when they think he’s been killed. That battle is “Gladiator” bloody, as any fight with razor sharp scimitars would be.

The mass executions, with conversions to Islam sparing some condemned to death, that accompanied Muhammed’s conquest or “liberation” of Mecca is left off camera. We just see his followers circling the Kaaba, the holiest place in Islam and allegedly built by the prophet Abraham (Ibrahim) and predating Muhammed’s faith by centuries.

One break from the strife and violence concerns Fatima’s marriage. Muhammed gives her to his chosen successor, Imam Ali. Her requested dowry? Not cash, but “Intercession for sinners, so that they might enter heaven.”

Shockingly, the rumor that Muhammed’s third wife Aisha (also digitally rendered) poisoned him is depicted in one of Bibbi’s stories. That plays as something straight out of Greek mythology, not the founding myth of a modern religion.

And there’s no sugar coating the bloody-minded and treacherous power struggle to control the movement that began years before Muhammed’s death and exploded after his passing.

The Kuwaiti London-based Sheikh Al-Habib wrote the script, which is heavy on history woven into anecdotes, thin on the preaching that would “convert” Laith into a love-thy-enemies/tolerate others exemplar of the New Muslim. As for narrative drive, let’s just say a lot of combat, shouting matches, intrigues and backstabbing passes before our eyes without a whole lot of organization.

This Islamic history as parable may play as “new” and intriguing to the uninitiated, but the movie’s something of a muddle.

“The Lady” is so much in the background of many of these homilies Bibbi passes on that it’s hard to see little Laith taking heart or renewed faith in the religion of his birth from these stories. His mother was named “Fatima,” so that helps.

But watching and hearing these sometimes-confusing anecdotes and the revolving cast of characters as a non-Islamic Westerner, one has to marvel at the popularity of any faith that seems this Byzantine, tribal, vengeful and violent. Of course it’s not like Christianity hasn’t spilled a lot of blood with its adherents waving the bloody shirt as vigorously as those of any other faith.

I feel safe saying “The Lady of Heaven” is respectful and not obviously Islamophobic, and while it pays lip service to non-violence, the filmmakers don’t go overboard trying to make the religion’s founding myths less violent than history tells us they were.

It’s hard to make out much that would pass for an “agenda” in this production by the British-based Enlightened Kingdom. As much strife as there is about interpretations of Muhammed, his biography, death and the struggles over his succession, I’m not deep enough into the subject to ascertain a Sunni or Shia bias.

Eli King is the credited director. Is he the Australian-born Egyptian actor, or some other Eli King? That’s not clear. With Islam’s reputation for intolerance of not just criticism, but filmed depictions of its early history, I shouldn’t be surprised if that’s a nom de plume.

What is known is that the production got around Islamic edicts about “idolization” or literal depictions of Muhammed, his family and chosen successor through digital trickery and simple camera angles. A Jim Henson’s Creature Shop veteran was brought in to consult on that. Figures such as The Prophet and Fatima are seen in shadows, from behind, totally-covered in a burqa and gloves, or played by soft-focus digitally-altered actors.

Yes, we see their faces, a cinematic first. The effects are pretty impressive if the acting isn’t.

Let’s hope no one gets the Salman Rushdie/Charlie Hebdo treatment over this, as no expense was spared to avoid offense in that regard. I haven’t read of any threats of violence.

Still, Pakistan tried to ban social media mentions of the film and online access to its trailer. Iran’s news agency has pushed a boycott of “The Lady,” which was filmed in the Republic of Georgia and London.

It’s rated R, as it is every bit as violent as “The Passion of the Christ,” although few have as much of a passion for making violence visceral and personal as Mel Gibson.

With scores of faith-based films about Christianity hitting movie screens every year, the sheer novelty of “The Lady of Heaven” makes it worth seeing, just as background on a religion most of us know very little about. That’s where the film excels, even if the many obstacles the production had to get around distracted one and all to the extent that they somewhat botched the messaging.