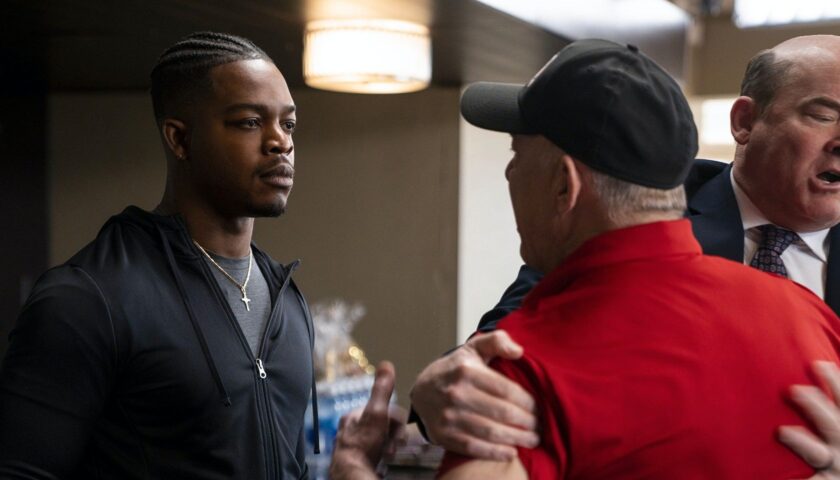 On paper, director Ric Roman Waugh’s National Champions is the kind of inspirational sports story engineered to get audiences fired up. It has the look and feel of a movie that was ripped from the headlines, though instead it’s based on a play by Adam Mervis, who wrote the script here as well. National Champions has a compelling and timely story at its center, and when it chooses to focus on that, it can be electric. Unfortunately, it’s too often bogged down by unnecessary plotlines and underdeveloped relationships. Aided by solid performances, National Champions has a great story, but ultimately its individual parts aren’t enough to score the winning touchdown.

Three days before the 2022 College Football Playoff National Championship, one of the star quarterbacks playing in the game, LeMarcus James (Stephan James), announces he’s going on strike alongside his best friend, fellow player Emmett Sunday (Alexander Ludwig). His reasoning? The NCAA doesn’t pay its student athletes despite earning billions of dollars off their hard work every year. LeMarcus wants change in the organization and he’ll do everything he can to get it, including throwing the game that could ensure his career in the NFL. As everyone from his head coach (J.K. Simmons) to the NCAA’s chosen fixer (Uzo Aduba) attempts to nip the strike in the bud, LeMarcus must confront his true motivations if he’s going to succeed.

The matter of student athletes being compensated for their work is one that is hotly debated today, and even saw some major strides this year when students earned the right to be paid for their name, image, and likeness. It might be easy for an outsider to scoff at an issue like this, but National Champions makes a compelling argument for why college athletes deserve benefits and proper salaries. This is shown through LeMarcus’ efforts to win over his teammates, going from room to room and giving impassioned speeches about their rights. With James’ assured performance at its center, National Champions is strongest when it focuses on this timely and thorny issue.

Unfortunately, Mervis’ script doesn’t push past the surface. The presence of a booster club — so eager to support the team when a win might further pad their bank accounts — suggests how deep the issue goes within these institutions, yet it ultimately fades to the background. LeMarcus’ actions are positioned as the ultimate betrayal against his coach, James Lazor, but their relationship is all telling instead of showing; several characters comment on how LeMarcus and Lazor have a long history and deep respect for each other, yet the audience never sees proof of it. Perhaps the most frustrating thing about National Champions is how often it pumps the breaks on its conflict in the first hour. A plotline involving Lazor’s wife (Kristin Chenoweth) and her lover (Timothy Olyphant) brings the momentum of LeMarcus’ first moves down, giving the movie some pacing issues Waugh can’t overcome. Chenoweth and Olyphant are always welcome onscreen presences, and Mervis attempts to tie them into the broader strike plotline later on in the film. Unfortunately, it doesn’t have the intended effect.

With so many talented performers packed into its ensemble, there’s no question that National Champions holds a certain appeal. And indeed, the cast is top-notch. The movie wouldn’t succeed without James, who must keep LeMarcus’ true motivations locked tight inside until the final act. Simmons brings his usual brash intensity to the part of Lazor, though he also manages to nail the quieter moments when the coach finds himself losing control of the situation. Still, if there is an MVP in National Champions, it’s Emmy winner Aduba. As icy fixer Katherine Poe, Aduba keeps her cards close to the vest, initially coming across as a cutthroat player who is willing to get her hands dirty. However, a pivotal scene late in the film’s run exposes Katherine’s true sentiments, and Aduba brings a devastating ferocity to her outburst. It’s just a shame that National Champions takes so long to properly introduce her, though she certainly makes an impact before she even says a word.

Overall, National Champions knows what beats it needs to hit to get its points across. Waugh mines emotion from all the right parts, and he effectively sends the message that college athletes are not to be overlooked. It might get audiences — who might go into the movie less informed about the issue — talking, but the film falters in the moments when it should be charging forward. National Champions has some winning elements, but the overall execution leaves a bit to be desired.