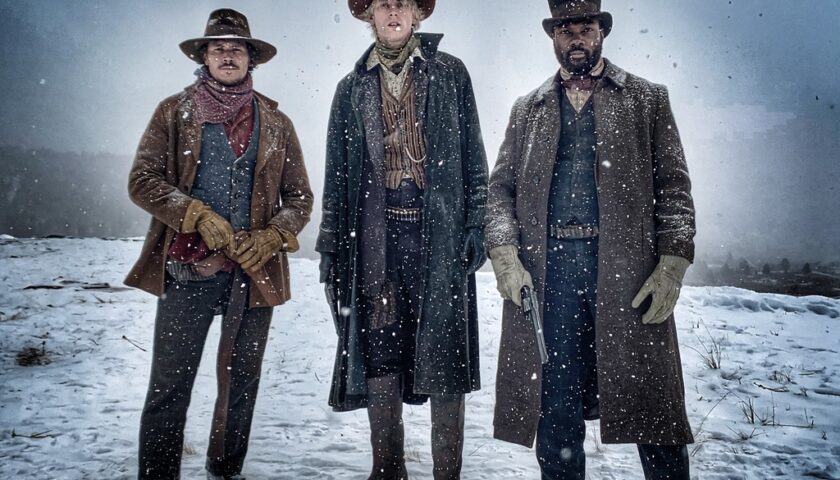 Switching gears from contemporary drama (“Funny Face,” “Dark Night”) to what Variety once dubbed “oaters,” Tim Sutton’s “The Last Son” finds fresh life in a well-worn genre: Its striking visuals are accompanied by an oddly appropriate score led by droning, heavily distorted guitars; its occasional narration is winsome in a way that Westerns do best; and its evocation of an endlessly mythologized era feels authentic. But then Sutton goes and overplays his hand, the effects of which aren’t as disastrous as being caught cheating in a poker saloon, but they do leave you wondering what might have been.

“The Last Son” opens with lyrical narration and airy background music courtesy of Phil Mossman that brings to mind “The Assassination of Jesse James by the Coward Robert Ford,” though the comparisons mostly end there: Sutton’s movie isn’t elegiac so much as brutal. The voiceover returns to add mood and context from time to time, as well as a third-act surprise that lends the film much of its retrospective heft — something it could have used more of throughout.

For you see, there’s a rumor going ’round these parts that a man from the plains has taken to killing his own kin — his own kin, reader — which naturally don’t sit right with the folks just trying to go about their business in this here community. And wouldn’t you know it, the man responsible for said filicide just happens to be one of our protagonists — but there’s more to his story than the clucking hens would have you believe. For while it’s true enough that ol’ Isaac LeMay (Sam Worthington) has taken to offing his own offspring, he’s doing so to prevent a most frightful prophecy: that he himself will be murdered at the hands of his own child. Because he doesn’t know which of them will be his end, he’s decided to throw out the baby with the bathwater. (If it makes you feel better, which it probably won’t and shouldn’t, all of the sons and daughters he’s killed were mothered by women of the night and Isaac doesn’t seem to have had an actual relationship with any of them.)

Isaac is gruff, laconic and looks like he took his entire look from the 1885 edition of Mountain Man Weekly. Worthington has been inconsistent in the past, but he’s solid in a role that emphasizes his physical presence while only calling on him to speak when absolutely necessary. His sins aren’t the only ones staining this land, however. Machine Gun Kelly (né Colson Baker), in a rare act of nominative determinism, plays Isaac’s outlaw son Cal, who has such an affinity for literal machine guns that he’s stolen one from the military in order to kill the father he hates so very much. With few exceptions, the character’s as ruthless as he is boring. He prefers animals to people (relatable, honestly), however, hence his decision to bury a dead fox he comes across moments before mowing down an entire army encampment with his ill-gotten Gatling gun.

Between the two of them, Isaac is somehow less objectionable — he seems to genuinely believe he has no choice in the matter, his hands having long ago been tied by fate and prophecy, not that his actions are any less reprehensible for that belief. Cal, meanwhile, delights in violence and is as single-minded in his violent quest as his father is. Maybe the apple really doesn’t fall far from the tree.

On the other side of the law is Solomon (Thomas Jane), a lieutenant who was raised by the Cheyenne, as evidenced by his superior tracking skills, the tattoo adorning his chin and halfhearted attempt at an accent that would be more prominent if he ever raised his voice above a mumble. As is so often the case, no actual Native Americans are given much to do here.

Solomon doesn’t factor into this bizarre hate triangle as much as you might expect, essentially leading to a showdown between a man who kills his children and another man who kills everyone else — not exactly a confrontation with much of a rooting interest on the audience’s part. One exception is Anna (Heather Graham), the prostitute who gave birth to Cal, maintains a close relationship with him despite his rumored misdeeds, and just so happens to be entangled with Jane; another is the narrator, whose part to play shan’t be revealed here.

The dialogue is all omens and portents, with biblical evocations and proclamations that one or both of these men is the devil himself, but “The Last Son” is at its most compelling in the spaces between these overwrought words. Sutton is working from a Black List script by Greg Johnson that seems caught between understated moodiness and on-the-nose dialogue that should have been put out to pasture (“I just wanna know why.” “Why what?” “Why the devil won’t leave us alone”). It at times feels a rough cut of a more accomplished film, with most of the pieces in place but a few crucial ones ever so slightly askew.