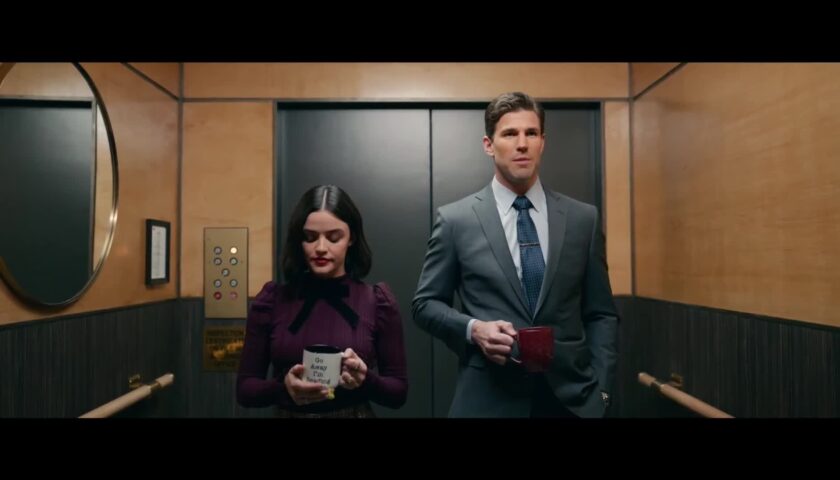 The rules of the hating game are not set, they are constantly in flux, changing to suit rapidly conditions. The one constant: its players, Lucy (Lucy Hale) and Josh (Austin Stowell), dueling assistants at a publishing house who not only seem incapable of seeing eye to eye, but of very often getting damn close to actually punching out said eyes. There is indeed a thin line between love and hate, and as Peter Hutchings’ crackling “The Hating Game” opens, Lucy and Josh are inches from demolishing that line forever. Fans of best-selling author Sally Thorne, who burst onto the romance scene with the 2016 novel on which Hutchings’ film is based, will certainly know what to expect from the feature version, but film fans will likely be delighted by a rom-com that dares to be — gasp! — genuinely sexy.

Ever since their very different publishing houses merged, Lucy and Josh have been at each other’s throats. As the respective assistants to the co-CEOs of newly formed B&G Publishing, Lucy and Josh both share ambition and drive, but their methods couldn’t be further apart. Consider their desks, set up to face each other (oh, the pain of having to be mere feet from your greatest enemy for hours every day): Lucy’s is messy, kitschy, cluttered, and cute, while Josh seems to go more for the cold corporate look. Their fights are legendary at B&G, and while animosity simmers between many members of the fractured staff, Lucy and Josh take the cake. (One major reason this all reads as sexy and funny on the screen: Hale and Stowell are not just well cast in the roles, they have actual chemistry, too.)

You know they’re going to fall in love. In some ways, they know it, too, as Hale kicks off the film with voiceover narration that ruminates on, ah yes, the weird ways in which hating someone can feel like falling for them. Mostly, it’s the fixation, and boy, are these two fixated on each other. Lucy knows the exact order of Josh’s weekly shirt rotation, while he calls her “Shortcake” as a nod to her roots in strawberry farming (go with it). But when the duo are pitted against each other for a shiny new job at B&G, things shift. Suddenly, their daily games — the hating game, the staring game, the copycat game — take on a different cast.

Like many rom-coms, “The Hating Game” trades in major misunderstandings. When Lucy’s animosity toward Josh twists itself into lust, she’s torn: Is Josh actually into her too, or is this just another game, meant to throw her off when she needs to be at her best? And, wait, is she actually into Josh, not just horny over a heady mix of his good looks and their incendiary chemistry? (Again, you know the answer, but watching it play out between these two charmers is delightful; like the book, there is also real emotional weight to their bond.) Every step they take closer to each other — many of them pushed along through a series of rom-com tropes, from an unexpected illness to a trip in which, oh no!, there is only one room they must share — is inevitably followed by another step back.

Thorne is part of a steady wave of up-and-coming romance novelists that offer both quality storytelling and good, old-fashioned smut to boot, and the heart-bumping chemistry between Hale and Stowell goes a long way toward letting R-rated “The Hating Game” capitalize on its lusty roots without going full NC-17. Screenwriter Christina Mengert has kept intact many of Thorne’s most beloved sequences of the steamy variety, and while the film is not as hot-and-bothered as the book, it gets damn close.

The entertainment world might be oddly gunshy about putting S-E-X back in the movies (especially rom-coms, which long ago seemed to forget about the romance factor), but “The Hating Game” doesn’t blink. (A sequence in which Lucy rips off a post-shower Josh’s towel to see what he’s working with is a great example: it’s funny and sexy and totally in line with their respective characters.) Hutchings’ film might not be able to go fully risqué, but there’s something incredibly refreshing about watching people falling in love and working that out through actual physical affection. Kisses? With tongue?! What a world!

Other elements aren’t as successful, such as fussy attempts at wacky humor (Lucy and Josh spend a few worrying minutes with a deeply nutty inn employee that feel out of place) and a subplot about Josh’s creepy boss (an almost unrecognizable Corbin Bernsen). But when Hutchings pulls in closer to Lucy and Josh, things fall back into place. Thorne’s novel might be best known for its hot-and-bothered sex scenes, but she also built a romance with real stakes and big emotion, and Hutchings and his stars translate that to the big screen with ease. Why can’t every rom-com make it look so easy?