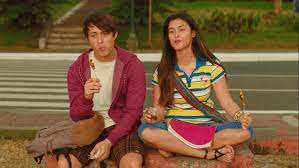 You can accuse writer/director/star Katie Holmes of doing a lot of things in her sophomore feature “Alone Together,” but you certainly can’t say she doesn’t wear her influences on her sleeve. The picture opens with a throwback jazzy vocal track over shots of the NYC skyline, Central Park, and the Upper West Side; the Nora Ephron vibes are palpable. June (Holmes) is a food critic with fabulous friends and a handsome fella; it’s a perfect little New York life. And then we hard cut to March 15, 2020 – the beginning of lockdown. A panhandler harasses her for change: “The world’s ending, bitch! I shouldn’t have to ask twice!” June decides she should maybe get out of the city for a while.

She flees to an Airbnb in the country, booked by her boyfriend John (Derek Luke) – but he decides to stay behind at the last minute to look after his parents. And when she arrives, she finds the home is already occupied by Charlie (Jim Sturgess), thanks to an unfortunate double-booking. She thinks he should leave. He doesn’t think he should have to. And that’s your basic set-up: a reverse “Goodbye Girl,” with the backdrop of a global pandemic.

The trouble is, Holmes is not exactly Neil Simon. June and Charlie dilly-dally around the house, shy and bored; their boredom is contagious, and their small talk isn’t exactly riveting. The dialogue is downright dire, all flat exchanges of information and banal insight and inconsequential chit-chat (“I can’t remember the last time I slept that long.” “Well, you must’ve needed it!”) – at one point early on, swear to God, they ask each other their favorite books. Their favorite books!

Look, this is not a movie that’s going to shock you with its plotting. It’s pretty easy to guess where all this is going, so you’d better get there with some style. But there’s none to be found here, no sparkling conversation or sparking characterization– June and Charlie drink and talk and sing karaoke and chat by the fireside and have sex by the moonlight and ride bikes to chipper pop songs. The motivations are murky (there’s no good reason for June not to tell John about the double-booking when he calls her the next day, except to cause a scene when he inevitably shows up later), and the procession of events is comically neat; she finds out John has been cheating on her literally seconds after walking in on Charlie naked. (Then again, maybe he wasn’t cheating on her — it’s questioned, never clarified, and immediately forgotten.)

Holmes’ screenplay is reasonably skilled at evoking those uncertain early days of the pandemic when hand sanitizer was a luxury, and we were wiping down deliveries. (Unfortunately, this fealty to detail also means using Andrew Cuomo as a voice of calm and competence, which, as we all know, hasn’t aged well.) But when the prescribed pathos arrives, they’re sour, at least in a film as light as this. We’re still navigating choppy waters in terms of immortalizing and dramatizing this period, but there’s something emotionally exploitative in wringing tears out of what has been, essentially, treated as the justification for a Meet Cute.

Because the picture is basically a two-hander – Melissa Leo and Zosia Mamet basically phone in their supporting roles, and Luke is only there as a spoiler – a lot of pressure ends up on Holmes and Sturgess. She is, as ever, a charismatic performer, and a good light comedienne; she wrings some welcome laughs out of a scene where she’s trying to resist a Big Mac, about the only food available, because she’s a (very recent) vegan. Her big emotional breakdown scene is genuinely moving, yes, but later on, she tells a story about a murder/suicide in a manner that’s so off-handed, it’s genuinely baffling. Sturgess is likable, and does his best with his paper-thin character, who works with his hands (“I restore things”), drinks beer, and wears flannel, you know the drill.

Holmes’ direction is, otherwise, hopelessly amateurish. When the big confrontation with John finally comes, they keep crossing and counter-crossing without motivation, like actors in an undirected high school forensics scene. She tries to build a big emotional moment out of June returning to the city and hearing the 7pm banging-pots-in-the-window tribute, but it doesn’t take an eagle-eyed viewer to notice that there’s no one in the windows of the wide shots, only the mismatched inserts. And when all else fails, she slathers on Graham Reynolds’ plinky piano score, which gets old fast.

It’s tempting to take it easy on “Alone Together,” because harsh criticism feels somewhat cruel – it’s just such a gosh-darned nice movie, about two nice people who meet up and are nice to each other. But this is one tepid piece of work, a story of bland people doing and saying bland things as the world burns around them.