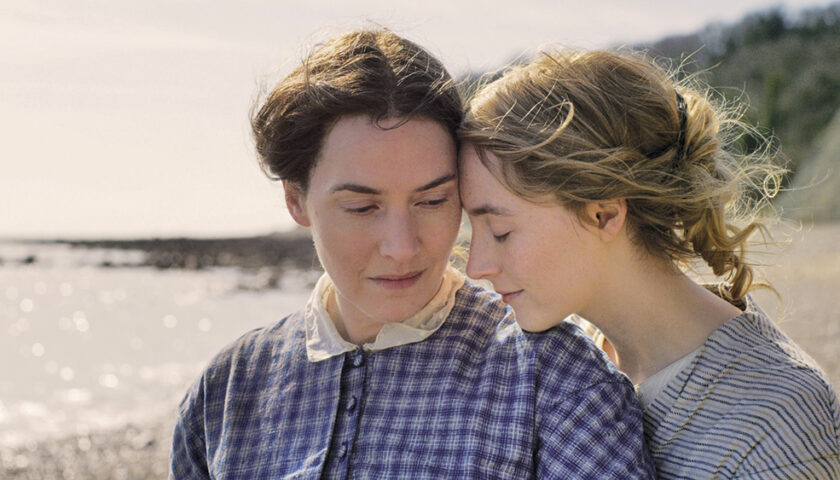 The first time Mary Anning (Kate Winslet) lays eyes on the woman who’ll become her lover, the encounter barely even registers. She’s focused on the woman’s husband at the time — Roderick Murchison (James McArdle), who’s stopped by her storefront on the Dorset coast before embarking on an archaeological tour of Europe. Mary is responsible for some major fossil finds, including an ichthyosaur skeleton on display in the British Museum, though as her conversation with Roderick makes clear, she’s more of a curiosity in his circles than a colleague. It’s aristocratic men like him who are welcomed into the Geological Society of London, not shopkeeping women — “all boys together,” she bitterly notes to her obliviously enthusiastic visitor, who only wants, and presumes he’ll be welcome, to accompany her for the day and absorb some of her expertise. Meanwhile, his spouse, Charlotte (Saoirse Ronan), trails behind him like a toy on a string, pallid and silent and unaware that she’s on the verge of being left behind while he continues on his travels. Mary pays Charlotte no mind until she’s hired to keep the younger woman busy, Roderick believing that walks in the sea air will help his wife’s depression.

Love at first sight, it’s not. Nor is it at second, with Mary impatient with her charge and Charlotte used to softer treatment. It is love, eventually — just not the swooningly soul-deep connection some audiences might be hoping for. Ammonite is a period lesbian romance set by the sea, details which unavoidably bring to mind Portrait of a Lady on Fire, though it’s a flintier affair, its physicality more expressive than any of the emotions it endeavors to put on display. It’s the second feature from Francis Lee, the filmmaker’s follow-up to God’s Own Country, which was about the relationship between the closeted son of a Yorkshire farm owner and the Romanian worker hired to help with lambing season. Historical setting aside, Ammonite has more in common with Lee’s 2017 debut than with Céline Sciamma’s film, especially when it comes to its brusque, emotionally constipated main character. Mary’s been hardened by her experiences with the scientific establishment and by having to sell her discoveries, like the extinct mollusks of the title, alongside the odd tourist tchotchke to get by. But she’s also a prickly, demanding personality who prizes her own carefully carved-out freedom, no matter how lonely it might be. Like God’s Own Country, Ammonite is less about how two people coming together than about how one person reckons with their own intimacy issues.

A lot of that intimacy is forced on Mary when Charlotte falls ill after bathing in the choppy, chilly waters of the Channel in hopes of improving her health. (The rocky gray-on-gray landscapes, shot largely in cool tones by Stéphane Fontaine, are an ode to inhospitable English beaches.) Mary’s not naturally inclined to act as nurturer, but the doctor, played by God’s Own Country star Alec Secăreanu, corners her into it by musing that, “It is a woman’s position to care for a fellow sister, is it not?” The way that Mary applies a salve to Charlotte’s chest is decidedly not sisterly at all, and once bridged during that fevered interlude, the initial distance between the women disappears. They walk along the shore, and it seems to brighten to a slightly lighter shade of grim. They share the bed and some laughs over domestic mishaps. Together, they retrieve a heavy specimen from a muddy cliffside. Their first kiss, when it comes, is followed immediately by an impassioned clinch that’s only somewhat impeded by all those floor-length layers and that’s lightly improbable in its ease. Mary, we glean from her cautious interactions with neighbor Elizabeth Philpot (Fiona Shaw), has had a relationship with a woman before, but Charlotte requires remarkably little by way of a learning curve for someone who’s spent much of her adult life being Yellow Wallpapered by her oppressively well-meaning husband.

It’s an odd thing to protest, a dearth of awkwardness in the love scenes, but it speaks to how little Ammonite feels like it actually inhabits the world it tries to build. It’s a fictionalized narrative about people — Anning, the Murchisons, Philipot — who really existed, but the figures on screen don’t feel like ones that have lives that continue beyond the scope of the runtime. Lee’s use of natural light and sparing dialogue, along with the dirt-under-the-nails tactility of the settings and the frankness of the sex, gives his films an air of naturalistic authenticity that isn’t actually supported by his writing. Ammonite leans heavily on those long stretches of silence, ones that are meant to be fraught with all the things that are going unsaid, but more often than not feel like blank spaces on which the audience can project, because there’s nothing actually there. Ammonite is Winslet’s movie to shoulder, and she carries it as far as she can, allowing flashes of terrified longing and desperation to flicker in her interactions with Ronan’s character as the gruff Mary starts to melt and open up despite herself. But Mary’s in love with a narrative device, not a person — Charlotte turns out to mostly be a means for Mary to be confronted with everything she might have wanted after stewing in solitary resentment for so long. Ammonite isn’t a lush love story, nor does it need to be. That’s not the reason it feels so hollow.