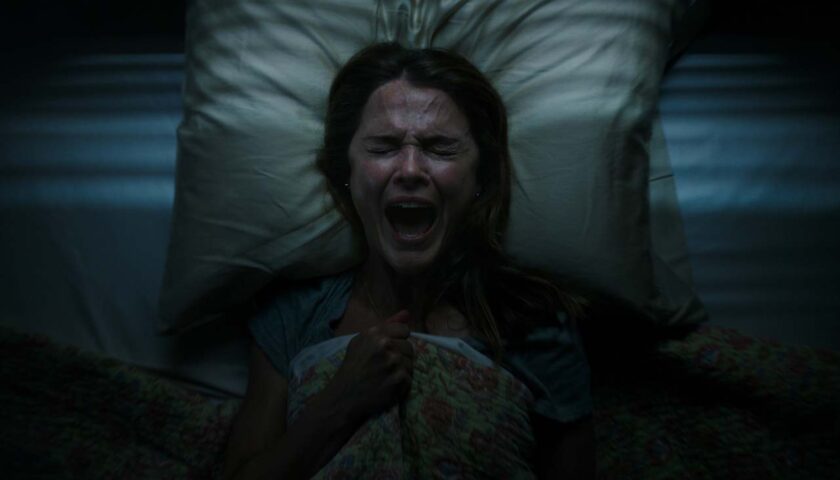 Thoroughly successful both as icky art house horror and as an allegory of generational trauma, Scott Cooper’s Antlers continues the director’s hot streak while bearing the unmistakable mark of one of its producers, Guillermo del Toro. Adapted from a short story by Nick Antosca (one of three screenwriters here), it watches as an ancient, malevolent monster terrorizes a small community already wracked by drugs and despair. Child actor Jeremy T. Thomas impresses in his first lead performance, a haunted turn embodying the picture’s deepest conflicts about family, duty and self-preservation.

Thomas’ Lucas is a 12-year-old shouldering terrible responsibility. His father, a single parent who cooks meth in an abandoned Oregon coal mine, has undergone a frightening transformation, and must now be kept under lock and key so he can’t harm Lucas. Lest he escape and feed on townsfolk, he eats roadkill and small animals the boy traps. The film will eventually identify him as the embodiment of a wendigo, a deerlike creature from Native American folklore, which has been awakened by unspecified atrocities (take your pick!) that humans have inflicted on the land.

Painfully withdrawn at school, Lucas attracts the attention of a teacher who has just returned to this small town after a long absence. Keri Russell’s Julia endured domestic horrors of her own as a child, and fled as soon as she could; kid brother Paul (Jesse Plemons) was stuck with their abusive father, then grew up to be the town’s sheriff. Julia can’t miss the signs that Lucas is being abused, and sets out to save him even if her principal and her brother think there’s not enough evidence to intervene. (Who could look at the terrifying images the boy keeps scrawling in his notebook and not immediately summon help?)

Russell’s performance mirrors Thomas’ in some ways, even if the only monster currently menacing Julia seems to be the alcoholism she holds at bay. The script avoids the specifics of what she and Paul endured in the same way that it avoids overemphasizing the real American crises that give Antlers its weight. Attentive viewers will catch talk-radio announcers in the background, mentioning opioids and mountain-top mining, and Paul’s occasional complaints about his job (evictions, drug arrests) reflect reality. But Cooper and his fellow writers (Antosca and C. Henry Chaisson) seem to have learned from other fictions addressing such issues, which often have an air of exploitation despite the best intentions. The troubles of rural America (and, therefore, America as a whole) are understood to be an integral part of the scene here, but this is a story of horrors endured by specific fathers and children, specific pairs of siblings.

We see a bit less of the wendigo than we’ve seen of some other creatures in del Toro films — you’ll likely remember him as a mess of horns moving through shadows, not in the detailed way one recalls the Faun or the Pale Man of Pan’s Labyrinth — and in important ways the beast is scariest before it sprouts those horns: Scott Haze, playing Lucas’ father before he has fully transformed, is monstrous and pathetic but still capable of commanding his son’s loyalty. (Lucas’ brother, played by Sawyer Jones, has caught a bit of their father’s sickness, and may remind del Toro fans of the orphan ghost in The Devil’s Backbone.) But the film delivers in creature-feature terms, offering plenty of grisly scenes in which Paul and other lawmen marvel at half-devoured corpses. (Playing a former sheriff who finds one of the bodies, Graham Greene delivers exposition linking the monster to Native tales.)

Exceptional cinematography by Florian Hoffmeister and Javier Navarrete’s subtle score round out a package sure to appeal to those non-horror buffs who’ve embraced scary movies like Hereditary. Given the breadth of Cooper’s work to date, ranging from true crime and historical epics to the intimate musical portrait in Crazy Heart, it seems highly unlikely he’ll latch onto this genre in the way Hereditary helmer Ari Aster has. But it will be a shame if he and del Toro don’t collaborate again somewhere down the road.