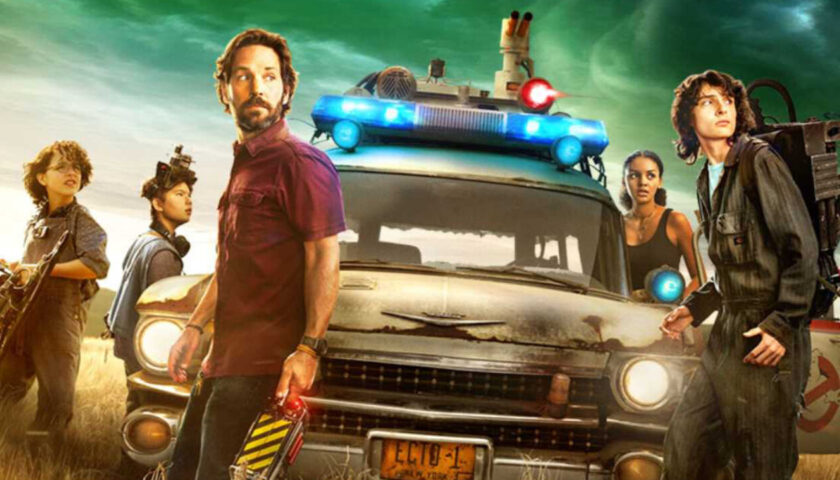 The original Ghostbusters was an interesting beast. Somehow, a movie about a group of New York comedians battling spooks and specters became a blockbuster franchise spanning sequels, animated shows, toys, and countless Halloween costumes. What, exactly, was the main ingredient in this success? Answers differ.

The 2016 Ghostbusters reboot directed by Paul Feig proposed that the New York comedians were the most important element in this ghostly brew, and recast the primary four roles with modern-day Saturday Night Live stars Kristen Wiig, Kate McKinnon, Leslie Jones, and Melissa McCarthy (a frequent host and resident Sean Spicer). In some ways this felt like a modern-day continuation of the 1984 original, which had been led by first-generation 30 Rock luminaries Bill Murray and Dan Aykroyd, but casting women in the lead roles made Feig’s film a lightning rod in the heady culture wars of 2016. Worse than that, it just didn’t impress critics or audiences much.

So here we are, five years later, with a new attempt at a Ghostbusters revival — this time directed by Jason Reitman, son of the original film’s director Ivan Reitman. I probably don’t even need to note that familial connection, since Ghostbusters: Afterlife is absolutely obsessed with legacy and inheritance. Reitman’s thesis is that all Ghostbusters obsessives have essentially the same relationship to the franchise as he does; even if their parents didn’t literally make it, younger fans may have still had it passed down to them, while those who remember seeing it in theaters in the ’80s might have made it a shared touchstone of personal relationships. Reitman has a different answer to the question of Ghostbusters’ success than Feig: He believes this franchise is all about the original characters — and even more importantly, their children.

To that end, Reitman jettisons the New York setting completely. Ghostbusters: Afterlife takes place in a mostly-empty small town in Oklahoma, where single mom Callie (Carrie Coon) and her children Trevor (Finn Wolfhard) and Phoebe (Mckenna Grace) move after getting evicted from their urban apartment. They find themselves on a farm belonging to their grandfather, an original Ghostbuster. These kids — along with newfound classmates Lucky (Celeste O’Connor) and Podcast (Logan Kim) — are soon dusting off old proton packs and the Ecto-1 in order to face down…pretty much the exact same ghostly villains that their predecessors fought in 1984. Even the closest thing to a new specter, the blue-colored Muncher, is clearly just a riff on the iconic green Slimer.

There are some jokes here — Paul Rudd brings a little lightness to the proceedings as the kids’ science teacher, Mr. Grooberson — but it’s hard to escape the overall sensation of, well, a corpse being exhumed. The tone is overall rather dour; Callie is constantly lashing out at her absent father in what comes off like Reitman (who brought his father to set every day as executive producer) trying to imagine what a broken family would feel like, and not quite getting the tone right. Intentional or not, Ghostbusters: Afterlife is a stark reminder of how much of modern American culture consists of excavating the ruins of past glories.

Annie Potts’ Janine Melnitz appears early, the first of many cameos and callbacks to the original films. Callie asks Janine if the run-down farm she just inherited really is as “useless” as it seems.”You mean aside from the sentimental value?” Janine replies rhetorically.

The same could be said of the new film as a whole. Anyone looking for connections to the original ’80s blockbusters will find what they’re looking for, but it’s hard to imagine Ghostbusters: Afterlife minting a new generation of fans.