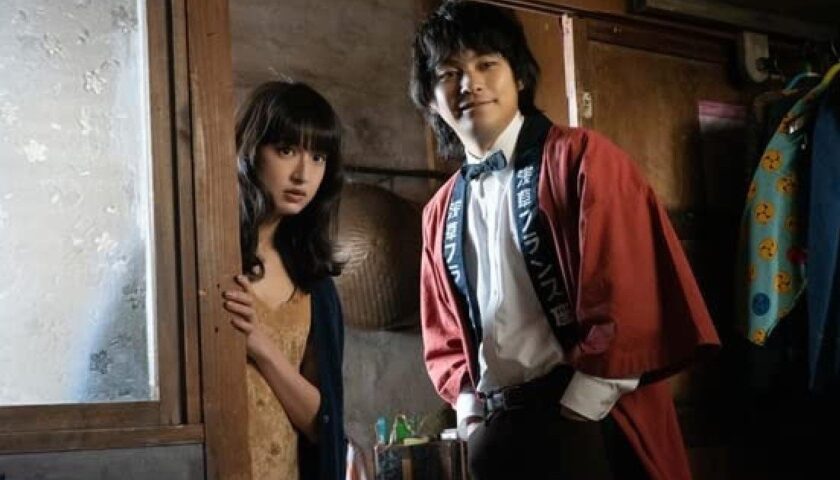 Takeshi Kitano. To international audiences, he’s an acclaimed, Golden Lion-winning director, in addition to having extensive screenwriting, acting and editing credits. To much of the Japanese population though, he is a comedian and TV host, and a damn funny one at that, to the extent that he is more commonly known as Beat Takeshi in his homeland. Based on his own memoir, Asakusa Kid focusses on this comedic side of his career and how it formed under the guideship of mentor Senzaburo Fukami, wonderfully brought to life here with great personality by Yo Oizumi. For viewers searching for a Kitano biopic that chronicles his impressive move into the international filmic world, you will be left wanting, but for those interested in his early years as a young, aspiring comedian, Asakusa Kid will tick all the right boxes. It might suffer from familiar biopic tropes – and you’ll know when it wants your emotions to kick in – but the admiration for Kitano behind director/writer Gekidan Hitori (A Bolt from the Blue) is clear. If nothing else, Asakusa Kid is a labour of love and a fitting tribute to this larger-than-life man.

Asakusa Kid starts in the 1970s, with Kitano performing manzai – a quick, back-and-forth style act between two performers – alongside Beat Kiyoshi, played here by Nobuyuki Tsuchiya. At this point, the pair do not perform to large audiences and both struggle to see a firm future in their career. Rewind to the mid-1960s and to Asakusa, a part of Tokyo, and here is where the bulk of Asakusa Kid takes place. Kitano works as an elevator boy at a strip club, which also puts on comedy shows led by master comedian Fukami. At first, Fukami is reluctant to take Kitano under his wing, but gradually the two form a master-student relationship, with hints of friendship hidden there too; it’s a touching story at times – Kitano’s real-life love for Fukami is truly felt – as well as being a clear indication of how Kitano’s star-quality was obvious even as a young adult.

Asakusa Kid moves formulaically on from here. Indeed, it’s first half is mostly dedicated to Kitano looking down-and-out and being rebutted by Fukami, a protracted opening which spends too much time on this section of his life. Things pick up when his career picks up, inevitably, but the two-hour runtime of Asakusa Kid is most certainly felt. And yet as formulaic as the telling of the story is, the almost-microscopic, channelled account of Kitano’s early years is commendable. Most people know about his comedic strengths, his hosting abilities (internationally too, as host of Takeshi’s Castle) or his unique directorial style, but few will know about how he came to be one of the most legendary comedians in Japan or the great debt he owes to Fukami in reaching this point.

Bringing Kitano to life on screen is the hugely capable Yuya Yagira, the youngest ever winner of the Best Actor award at Cannes Film Festival for Nobody Knows. Yagira’s acting strength is clear to see again here in Asakusa Kid: you never feel as if you are watching someone performing as Kitano, rather viewing Kitano as himself as a youngster. He nails Kitano’s deadpan face, complete with his ticks and prone to erupt into animation without warning, as well as his dynamism on-stage persona and fast-paced delivery. Above all else, Yagira embodies the comedian inside Kitano. Asakusa Kid might not be as funny or as witty as one would hope when bringing Kitano’s career to life, but Yagira – and indeed Oizumi – add real comedic impetus. When the two of them are riffing off one another, or when we watch Kitano and Kiyoshi performing manzai in their successful years, the whole thing plays out on a very amusing scale. It’s a shame then that Asakusa Kid spends too much time based around clunky, predictable dialogue, complete with a cloying, sentimental piano score.

In many ways, Asakusa Kid feels like a missed opportunity. Comedic moments such as those above or parts when the musical score goes down a drum-based, showtune route truly embody Kitano as a performer. There are even some fantastic, dreamlike sequences showcasing his brilliant tap-dancing abilities. The true joy, however, is surprisingly in the sweet relationship between the student and his master, and the immense importance of Fukami on Kitano’s career. But these strengths get lost in a glut of biopic trappings and the result is a piece of work so safe that it feels at odds with Takeshi ‘Beat’ Kitano. Asakusa Kid will slightly satisfy any itch you have to learn more about this intriguing, colourful man, but perhaps a better way to spend your time would be to watch one of his manzai shows or one of his award-winning films.