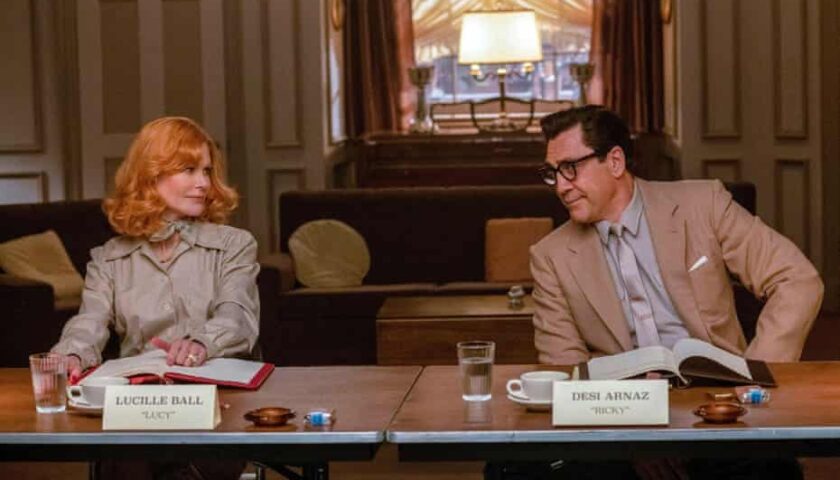 I was lucky enough to have a mom that showed me I Love Lucy as a kid. Even as a child in the 1980s, the show’s comedy works wonders. Lucille Ball was nothing short of a comic genius and the show’s writing set the bar for sitcoms for decades. So how do you tell a story about a legend like this who took a surprising path to comedy and her marriage/partnership with Cuban singer Desi Arnaz? How do you work that into a two-hour story? Writer-director Aaron Sorkin would probably like the answer because he certainly didn’t figure it out with Being the Ricardos. While Sorkin clearly feels some kinship with the setting of a sitcom having served as a showrunner on four different series over the course of his career, he seems uncertain about where to turn his lens on this story. Is it about the challenges of making an outstanding half-hour of television in a single week? Is it about the give-and-take of Ball and Arnaz’ marriage? Is it about Ball’s brilliant mind? Is it about that time when she was accused of being a communist? Sorkin decides his movie should be all of these things, and it makes Being the Ricardos all set-up without a punchline.

Being the Ricardos takes place over a fraught week in the lives of Hollywood power couple Lucille Ball (Nicole Kidman) and Desi Arnaz (Javier Bardem). A gossip columnist has accused Ball of being a communist even though the House Un-American Activities Committee cleared her in private. The jokes on their latest episode aren’t landing. Ball is pregnant and they want to work that into the show even though CBS and sponsor Philip-Morris will never allow a woman to be pregnant on television. Arnaz has also been accused of having an affair, which he vehemently denies. While Ball and Arnaz spar with each other, they also square off against their co-stars William Frawley (J.K. Simmons) and Vivian Vance (Nina Arianda), their showrunner Jess Oppenheimer (Tony Hale), and their writers Madelyn Pugh (Alia Shawkat) and Bob Carroll Jr. (Jake Lacy). Ball feels like if they don’t nail this week’s episode, then everything she and Arnaz have worked for will fall apart. There are also flashbacks to how Ball and Arnaz met and worked their way to having the #1 show on television.

Watching the film, it feels like Sorkin scribbled out a bunch of interesting anecdotes about Ball and Arnaz but had no idea how to build them into a story. While movies typically will condense events for narrative economy, Being the Ricardos strains credulity that all of this is happening within the span of five days, and it doesn’t cohere into anything substantial. It also feels like Sorkin is grasping because not only does he force the story into this week-long construction, but then he also puts a framing device on top of that where an elderly Oppenheimer, Pugh, and Carroll Jr. reminisce, which doesn’t add anything to the movie. It doesn’t help to have one of those elderly writers say that Ball and Arnaz were either at each other’s throats or tearing each other’s clothes off and then immediately go to a scene where they do just that. It’s one of thing to tell instead of show, but an experienced writer like Sorkin should know better to tell and show.

Somewhere in Being the Ricardos is a good story, but Sorkin should have known not to try and tell all of them. If it’s about the pressure-cooker of making television that would be a completely worthwhile narrative on its own. But perhaps Sorkin felt that you couldn’t tell that story without getting into Ball and Arnaz’ marriage, and then that leads you into their personal struggles with the communism and infidelity accusations even though you’re already gleaning a great deal into their personalities from how they work on the show together. Furthermore, trying to cram in flashbacks about how Ball and Arnaz met and her ambitions before I Love Lucy are largely irrelevant to the meat of the narrative unless Sorkin’s goal is to try and contain the totality of their marriage, an endeavor in which he failed.

This mishmash of various storylines does manage to be sporadically entertaining because while Sorkin struggles with the plot construction, he tends to excel at dialogue, so there are plenty of zingers to help keep the film afloat. He’s also got an interesting backdrop since I Love Lucy is one of the most important TV shows of all-time, and it’s interesting to see how all of its personalities collided with each other. And for the most part, he’s cast his film well with Bardem at his most charismatic and charming as Arnaz. It makes me wish Bardem did a flat-out comedy because he would probably knock it out of the park. The supporting cast is also terrific and knows how to handle the rat-a-tat of Sorkin’s dialogue.

But the big miscasting is Kidman. Kidman is a terrific actor, but I never once bought her as Ball. I saw Kidman in a red wig and doing a throaty voice, and that simply cannot be the totality of Lucille Ball. Instead, her take on Ball is that this is a serious woman with a rapier wit, and that’s fine, but it’s weird that the approach Kidman and Sorkin have to this comic genius is that she was never particularly funny until the camera was on. Sure, she’d have cutting comebacks, but there’s not much humanity to Ball beyond a desire to be taken seriously. While that’s an understandable ambition, especially in a male-dominated environment, the character construction doesn’t seem to make a lot of sense. We’re told that Ball’s greatest desire is for “a home” and when she couldn’t have one in real life, she built one on television, and perhaps that paints Ball as a tragic figure, but in Kidman’s hands, she comes off as oddly robotic. There are scenes we’ll she pause, have a determined look on her face, and go into “Lucy-vision” where she sees how to best play out a scene, and it stops making Ball feel like a person.

I still love I Love Lucy and Ball and Arnaz are clearly captivating figures who deserve to have their stories told. Unfortunately, Being the Ricardos is not the right vehicle for these narratives, or at least, the amount of narratives that Sorkin wanted to explore. He doesn’t have the right actor in the role of Ball, and he certainly hasn’t nailed down how to approach these figures or their world. He’s on surest footing when it comes to the trials of making a TV show, but the more he tries to work in the travails of Ball and Arnaz’ marriage, the further he drifts away from his movie’s strongest dramatic element. Halfway through Being the Ricardos, you’ll wish you were just watching I Love Lucyepisodes.