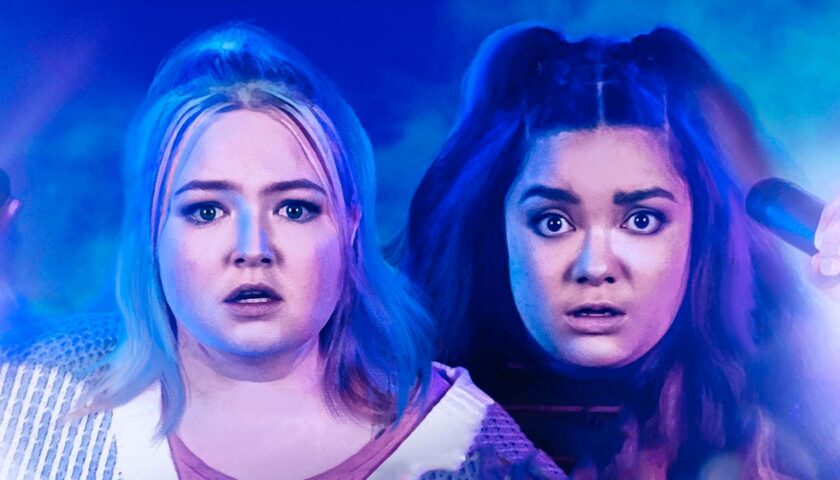 Into every generation, a teen horror drama is born: one series in all the media landscape; a chosen show. It alone will wield the quips and metaphors needed to fight the supernatural villains, social pressures, and other various youthful troubles. To stop the spread of standard high school melodramas and the swell of their number. It is…the newest supernatural young adult T.V. series.

Which is all a cheeky way to say that Astrid & Lilly Save the World will feel familiar if you grew up with your own favorite teen horror show. This new series, from writers Noelle Stehman and Betsy Van Stone, makes no bones about its influences: from the title characters going toe-to-toe with a dancing demon to their mysterious guide introducing himself as their “Giles.”

But Save the World also endeavors to put its own spin on the familiar setup. The show features a pair of young outcasts: Lilly (Samantha Aucoin), a shy young woman who idolizes T.V. spies and detectives like Olivia Benson of Law & Order: SVU, but lacks their self-assurance; and Astrid (Jana Morrison), who’s more confident and extraverted, but no less stuck on the social sidelines. The two best friends’ lives change when they inadvertently open a portal to a dimension of monsters who just so happen to double as metaphors for assorted teenage challenges. Suddenly, it’s up to them to save the day in the shadow of these attackers and maybe even become their best selves in the process.

It’s a durable premise. In places, though, Save the World struggles to match the charms and cleverness of its spiritual predecessors. The series is riddled with broadly-drawn, standard high school archetypes. Few of the characters stand out for their depth. Instead, most are hastily introduced with a flurry of the usual teen tropes, shortly before our protagonists are hating/admiring/saving them or the monster of the week steals them away. The humor is cheesy, and the tone is over-the-top. To call the show’s approach ungrounded would be an understatement.

But the latest supernatural drama has its merits. As much as the title characters are zany quip machines (Astrid especially), the girls’ friendship is endearing. Every once in a while, Save the World drops the wackiness and gives the audience more genuine moments that show the series’ potential, particularly with respect to its title characters. The daring duo may smart at the cruel words of their classmates, converse with a friend-turned-foe after their lives took different paths, or reassure one another that they matter, if only to one another. Whatever the setting, these heartening exchanges offer a realness missing elsewhere.

These moments are the highlight of Save the World’s first trio of episodes. In truth, they frequently feel like scenes plucked from a different series. Suddenly, the plinky musical stings and overblown goofiness fall away. In their place are two relatable young adults finding comfort in their camaraderie, despite the harshness their classmates pile on, and the myriad other challenges teenagers like them face.

To the point, Astrid and Lilly Save the World stars two young women of size, something forebears like Buffy the Vampire Slayer toyed with in an unaired pilot but never committed to. The new series does a good job on that front, not shying away from the treatment teens like Astrid and Lilly would receive at the hands of their social set, or the insecurities they might harbor in that wake, while not making the show about that. Instead, it commits to the twosome as full-fledged characters with wants and hopes and personalities that exist wholly apart from their physical appearance.

There’s also an intriguing little ecosystem at play. The characters who populate Pine Academy could still use more dimension. But the popular girl is harangued by her religious mother. The cast of parents and teachers have their own alliances and grievances. And hints at forbidden crushes and local objections to “alternate lifestyles” give the series the hint of greater depths. There are even a few intriguing wrinkles to the usual formula here, as villains offer compelling arguments about who our heroes should trust while subtext about feeling unseen and overlooked hits home.

Still, sometimes Save the World suffers in the execution. “High school as horror” is a venerable concept for a reason. But a standard fable about facing your fears, or a demon who thrives on drinking the tears of sad and lonely teenagers, plays as too on the nose. (Especially when his victims are making winking comments about him being a “sexy dance daddy” mid-harvest.) These high school students spit out cringey slang like “sus” and “lady boners.” And the performances and dialogue veer toward the cartoony, with some painful gags and inescapable theater kid energy at every turn.

And yet, many of the contemporary busy-bodies who reviewed the teen genre shows of the last generation said the same thing about the now-beloved monster-slaying shows du jour. It’d be a fib to say that Astrid and Lilly Save the World will have the same appeal to viewers who grew up amid the previous crop of teen horror series. In its first three episodes at least, this new show plays like a well-intentioned, but less successful inheritor, deploying the same sorts of beats and setups to diminishing returns.

But each new generation deserves its own bite at the apple. Especially at a time when we’re finally reckoning with the sins behind the genre’s landmarks, it’s especially refreshing to see a teen horror show run by women, devoted to capturing the experiences of teenage girls, from the perspective of writers who lived through them.

In that spirit, the sorts of stories and approaches that may seem overfamiliar to crusty old reviewers might feel fresh and exciting to the young folks who the show’s intended for. The zany tone and over-the-top exchanges among the kids and their caretakers that might induce eye rolls in grown-ups could hit right on target for a younger crowd. Each new set of teenagers deserves their own chosen one (or ones). Astrid and Lilly are still finding their way on that front, but they fly their flag loudly and proudly and deserve the chance to make their mark.