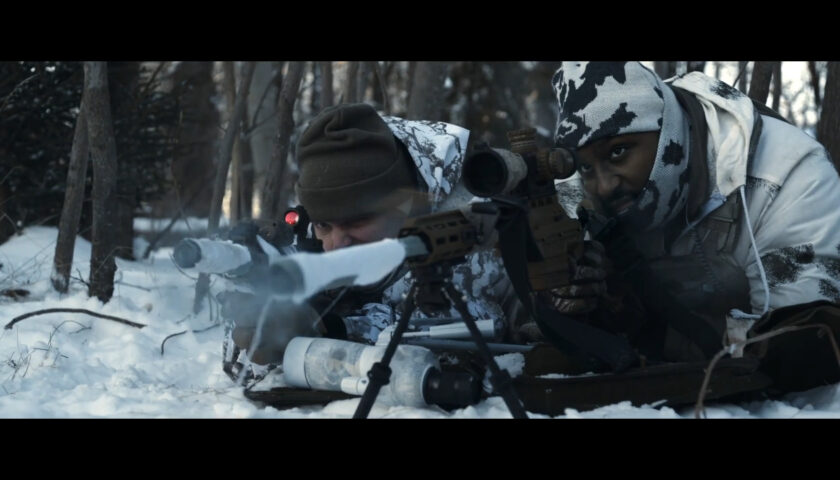 Two special agents with a complicated past. A high profile hostage crisis at an elite event held on Finland’s independence day. International intrigue from the Nordic peninsula to the EU, the Balkans, Belarus and Russia. Attack On Finland – know as Omerta 6/12 in its homeland – is one of those charged political thrillers usually delivered on a blockbuster budget. It was made on a comparatively small one, but most of the time that doesn’t show, and fans of action and espionage will find a good deal to enjoy.

It is not the most intellectually sophisticated of thrillers, but it gets most of the big stuff right and, crucially, knows when explanations are best avoided. We enter it not just in a position of uncertainty but in literal darkness, watching as two people break into a spacious private residence to steal something from a computer. They are interrupted and tragedy ensues. It’s a particularly trying moment for the woman who emerges as our heroine, Sylvia Madsen (Nanna Blondell), who is forced to reckon with the discomfort of letting go of her moral concern for individuals so that she might protect the many. Her fellow agent, Max Tanner (Jasper Pääkkönen), tries to help her but has his own follow-up to deal with.

The two reunite briefly some months later, in that fateful December in Helsinki. She’s there to serve as bodyguard to controversial EU politician Jean Morel (Zijad Gracic), which naturally means that she’s right in the middle of things when the hostage takers enter the building. Tanner, meanwhile, is charged with managing the situation, and although he strives to take a professional approach, it’s clear that his number one priority is getting her out.

When hostages are taken in a house or a bank, you can be reasonably certain that the ringleader is present at the scene. When it happens at a high profile international event, you can be equally sure that it has been orchestrated by somebody far away and much more powerful. Rather than building on the claustrophobia of the siege situation which inevitably develops around the hostage-takers and their captives in the building, the film soon expands its reach. We have already been introduced to one of the ostensible bad guys, Vasa Jankovic (Sverrir Gudnason), who is doing it partly for money but also hopes to get his father released from prison as part of any deal. Naturally, there are a number of double crosses, though perhaps the most tragic moment comes when he demands to be paid ten million bitcoin – significantly less money now than it was at the time of filming.

There are some capable actors involved here, but without much real depth to their characters, they have to work hard to make us care. Cramming a lot of plot into just two hours of film means that nothing really gets the treatment it deserves. Director Aku Louhimies strives to make up for this with the action set pieces. A car chase through the city may not have as much going on as in bigger budget productions, but it still packs a dramatic punch. There are also a couple of nicely staged – though rather short – fight scenes, with both leads demonstrating that they know their stuff, and Nika Savolainen makes her presence felt as a mysterious and deadly assassin.

In the end it all feels rather remote and impersonal, but Pääkkönen and Blondell have a sort of lived-in chemistry which adds weight to their scenes together. If what you’re looking for is action, intrigue and the escapist fantasy that sometimes wealthy, well connected people have to pay for their crimes like others do, you’ll find it reasonably satisfying. With the shadow of Russian aggression looming over Finland at the time of release, it has topicality on its side.