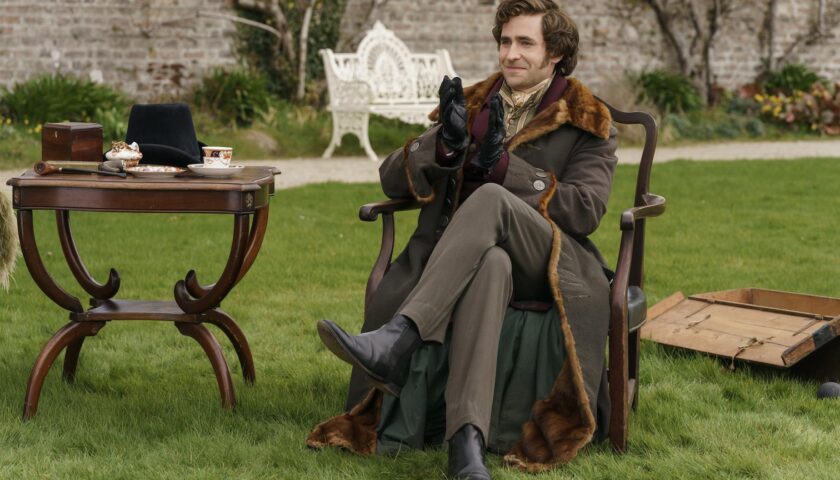 The recently accepted fashion of populating period British romantic melodramas with actors of color, notably in Netflix’s ongoing hit series Bridgerton, continues with Mr. Malcolm’s List, a nicely decked-out, dramatically conventional tale of Regency-period matchmaking dizzily spinning out of the participants’ control. Admittedly “loosely inspired” by Pride and Prejudice, this modestly scaled venture deep into Jane Austen territory is bedraped with sumptuous estates and elaborately accoutered young men and women forever gossiping and arguing in the poshest possible accents. As familiar as the genre’s conventions may be, they never seem to get old with audiences, who can be counted upon to lap up this Bleecker Street release when it opens July 1 in theaters.

To call this project long-aborning is something of an understatement, as the road has involved many stops along the way. Suzanne Allain self-published her novel in 2009, then wrote a screenplay adaptation that director Emma Holly Jones heard on a Black List podcast reading in 2015. Jones came aboard and shot a short film teaser that went online in 2019, the novel was officially published the following year, and now the finished film — which was shot in Ireland — is here. It only took 13 years.

The look, tenor and manners are all what you expect from such a high-toned but middle-browed period piece, which is mostly set in 1818, when everyone was evidently quite good looking and had matchmaking permanently on the brain. All the same, the titular list of requirements for a bride laid out by the highly eligible Mr. Jeremy Malcolm (Ṣọpẹ́ Dìrísù, of the popular Gangs of London TV series) seems so daunting as to be impossible for any woman to fulfill, not that this stops ambitious hopefuls from trying. Given the time-proven Swiss watch-like mechanics of the genre, it’s not surprising how it all works out in the end; Allain has certainly spent enough time with this particular project to insure that every little thing has been fine-tuned to the nth degree, leaving nothing to chance, which makes the film both predictable and comforting in the expected manner, even as it’s still faux Austen.

By extension, one might suggest that director Jones is faux James Ivory, so carefully has she adopted the accepted manner of approaching classy, literary-attuned material. Apart from the actors’ skin color, everything here is as it’s ever been — people stand around speaking cleverly in elaborate clothing, enunciating in very proper diction in impeccably appointed homes set amidst beautifully maintained gardens and lush adjoining forests as far as one can see.

Given that good breeding, connections and societal niceties count for everything here, Allain and Jones pay astute attention to the rules of the game and emerge in decent, if not immaculate, shape. A short prelude shows two schoolgirls, Selina (Freida Pinto) and Julia (Zawe Ashton), pledging to look out for each other in life. Jumping years down the line, the now-grown women are looking to make their “best catch,” and Jeremy, with his vast estate, seems like a challenge worth the effort.

But he’s an elusive fellow, a fact made clear by that list of requirements. Nonetheless, the rambunctious and more aggressive Julia dives right in, and a grand weekend with many guests at Jeremy’s mother’s estate gives the over-anxious Julia just the occasion she’s looking for to seal the deal. But it all becomes far more complicated than that, as Allain charts a twisty, trap-ridden path for her characters that leads to the sort of satisfying conclusion that Austen knew very well how to finesse.

Allain and Jones prove to be good, if not inspired, students of the form, pushing (and fastening) all the right buttons while introducing few fresh touches or twists of their own, other than in the casting. Everything here is right on the nose — it’s boisterous decent fun, even if the performances are poised at a precariously high pitch with subtleties largely cast to the wind. Allain and Jones take it on trust that, if they were to rigorously follow the 200-year-old formula in all degrees, things would more than likely turn out all right. And so they have.

Pinto, still best remembered from Slumdog Millionaire 14 years ago, and especially Ashton are rambunctious almost to the point of overkill but still keep the audience rooting for them despite the naked calculations of both their characters and the writers who put their words in their mouths. The film’s plain visual style will look right at home on television.