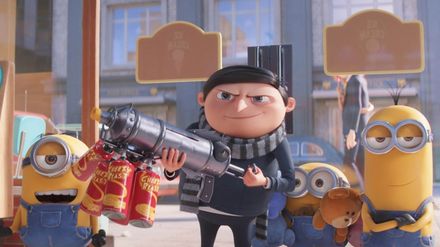 What does it take to become a world-renowned supervillain? Minions: The Rise of Gru, Illumination’s latest installment in the Despicable Me franchise out this Friday, explores this question and more as it traces the origin story of everyone’s favorite power-hungry supervillain, Gru (Steve Carell). Set in the 1970s, Minions: The Rise of Gru situates itself in between Minions and Despicable Me timeline-wise. The Minions, including Kevin, Stuart, Bob, and a new braces-clad Minion named Otto (Pierre Coffin) have just answered Gru’s wanted ad and are now helping their mini-boss build his first basement lair, design his first set of super weapons, and carry out his very first super scheme. Gru, though, he’s ready for the big time. He’s ready to join the Vicious 6, a notorious supervillain supergroup, and he’s fairly certain that’s a leap he’s got to make on his own — without the Minions’ help.

Meanwhile, the Vicious 6 have ousted their leader, Wild Knuckles (Alan Arkin) and are hosting interviews to fill his spot. While they do initially extend an interview invitation to Gru, once this 11-year-old boy shows up, the group is unimpressed. They don’t need some kid tagging along! Yet just as this notorious crew underestimates Gru, he outsmarts them, setting in motion the film’s non-stop action heist adventure. Gru is on the run, the Minions must learn Kung-Fu to save him, and it’s not long before Gru realizes that even the most despicable villains are better off with friends by their side.

Starting with the original Despicable Me, this franchise has always hit its strongest stride when pairing the wild action sequences and insanely creative weaponry of villainous heists with tender-hearted moments of empathetic connection. One of the most powerful aspects of Gru’s character from the onset has been the fact that his cold, power-hungry heart thaws for the people who matter most. Whether that’s his eventual adopted daughters, his faithful Minions, or other villains struggling with loneliness and insecurity, Gru’s superpower has always been connection — proving that he does deserve the love his mother never seemed interested in showing him. Here, in his origin story, we get to see this essential core nature of his character on full display in a way that aligns well with where we know his story will eventually lead in 2010’s Despicable Me.

This movie positions Gru as a naïve, impressionable, yet at the same time wise-beyond-his-years boy at its heart, but the film’s lifeblood is a fun, fast, bounty of villainous vendettas. Instead of focusing too long on one storyline, a trap the original Minions movie seemingly fell prey to, this heist bonanza switches from storyline to storyline faster than a gaggle of whack-a-moles. This frantic energy keeps the momentum at top speed, constantly leaving us on the edges of our seats, wondering when each of these villains, all chasing one another to varying degrees, all desperate to achieve their various goals, will collide and what mayhem will then ensue.

While we get to spend ample time in this fun summer sequel with all the characters we already know and love, Minions: The Rise of Gru also introduces exciting new cast members. In the Vicious 6 alone we’ve got Jean Clawed (Jean-Claude Van Damme) armed with a huge robotic claw, Nunchuck (Lucy Lawless) who keeps her deadly nun-chucks concealed underneath her seemingly pious get-up, Svengeance (Dolph Lundgren) a Swedish rollerskating agent of death, Stronghold (Danny Trejo) who’s got huge hands primed for fighting, and their maniacal leader Belle Bottom (Taraji P. Henson) dead-set on proving that her crew is NOT to be messed with — especially by some young punk. And outside this crew is Master Chow (Michelle Yeoh) a wildly talented Kung Fu master spending her days treating patients as an acupuncturist. The Minions turn to her in their time of need, and the lessons she provides do not disappoint. All of these fun new characters are delightfully inventive and if anything, we don’t get to spend long enough with them.

But that is part of the fun of these Minions movies. The fast-paced, vaudevillian-style humor keeps us laughing despite the fact that we never really have any clue what any of the Minions themselves are saying. This movie affords itself more surface-level moments with lesser-developed villains because of the relationships we’re immediately invested in between Gru and his Minions. Gru thinks he’s outgrown these Minions — starter henchmen who constantly make his life far more complicated than it ever needed to be in the first place. But Gru’s frustration with his Minions is the frustration of teamwork, the frustration of collaborating with folks who aren’t necessarily blindly following your will despite the fact that they chant their blind devotion to their mini-boss over and over and over again. Getting to see Gru and the Minions’ relationship deepen over the course of this movie is a profound inquiry into what you do or don’t need to sacrifice in order to reach higher heights and achieve ambitious success.

Why are these children’s movies about world-dominating villains so fun? Because at their core, they’re not about anything evil at all. Minions: The Rise of Gru, like the other Despicable Me films, uses the guise of villainy to explore how broken people turn to ambition and validation to compensate for all the love missing in their lives. While we may not all be able to relate to or approve of a little boy who cheese-rays innocent bystanders or fart-bombs an entire movie theater, we can instantly feel compassion for that same little boy’s desperate search for validation. Gru wants more than anything to join a group. To be wanted. And even though his sweet Minions have already adopted him as their fearless leader, he wants more. He wants better. More prestige. Over the course of this film, it’s the exploration of that desperate search for connection and validation that imbues a silly animated movie about evil supervillains full of heart. At the end of the day, we see that even the evilest of supervillains benefits from a little collaboration and companionship. Minions: The Rise of Gru proves that even the worst of the worst, as it turns out, get by better with a little help from their friends.