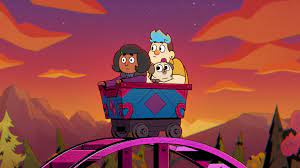 Dead End: Paranormal Park, the new Netflix animated series based on the short film Dead End and the comic series DeadEndia by Hamish Steele, made enemies before it even premiered. The office of senator Roger Marshall cited it as one of the “hypersexualized” children’s shows he and four other U.S. senators (Mike Lee , Mike Braun , Steve Daines , and Kevin Cramer are demanding new content warnings for. The reason these censorious senators are so upset about Dead End: Paranormal Park? Because it’s the first American children’s show to center on a trans main character.

For those of us who have been frustrated with both Netflix’s gutting of its animation department and its uncomfortable defenses of transphobic comedians, it feels like a minor miracle Dead End: Paranormal Park actually got made at this time. With extreme transphobia spreading across the country and trans youth being particularly vulnerable, an all-ages cartoon showing a gay Jewish teenage trans boy finding love and acceptance while struggling with unaccepting family members feels genuinely important.

But beyond issues of importance and representation, is the show good? Yes, though it’s not on the same level as other silly-spooky story-driven cartoons like Adventure Time, Gravity Falls, and The Owl House.

Its major weakness is the animation itself. The original Dead End short was crudely drawn but expressively fluid in its off-model animation; the DeadEndia comics offer more attractive and detailed art while still embracing that “off-model” fluidity. Dead End: Paranormal Park, in contrast, uses puppet-style digital rigs where everything is so “on-model” all the time that it’s drained of life. Rigged animation can be used well; it’s well-suited to snappy dialogue-driven sitcoms, and shows like The Ghost and Molly McGee and Centaurworld have been able to push the technique in more expressive directions. Unfortunately, the animation in Dead End: Paranormal Park fails to capture the comic’s visual charm.

Thankfully, the show’s writing fares better, effectively balancing the story’s serious diversity issues with wacky adventures in a haunted theme park. Barney (voiced by Zack Barack), the main character, is working and living in the park after running away from home. His co-worker and new friend Norma (Kody Kavitha) has an encyclopedic knowledge of the park, which is based around the films of a Dolly Parton-esque actress named Pauline Phoenix (Clinton Leupp). Living with Barney in the park’s haunted house is Courtney (Emily Osment), a demon trying to resurrect her evil lord and return to Hell. The biggest obstacle in Courtney’s way is that a fraction of her master’s soul is now stuck inside Barney’s dog Pugsley, who as a result can now speak (in the voice of Alex Brightman).

As an autistic critic, I was particularly happy with how Norma’s stories were handled. While they don’t directly use the word “autistic” to describe her in the show, it’s obvious she’s written as such, and she’s written very authentically (Hamish Steele is autistic himself). The show honestly addresses her anxiety, confusion over social rules, and both the great joys and occasionally intense struggles of hyperfocusing on a special interest. Those who were extremely wrapped up in, say, Harry Potter and then had to struggle with what it meant personally for J.K. Rowling to turn out awful will find part of Norma’s story all too relatable (amusingly, this plot involves a parody of the celebrity least likely to commit any cancelable offense).

Dead End: Paranormal Park doesn’t have as many laughs per minute as Gravity Falls, and better animation would definitely have improved the comedy in a lot of scenes, but it’s got some solid humor. The show gets more confident in the second half of the season with more high-concept episodes, like one presented in real time in line for a ride, one traveling into various different movies, and, best of all, a musical episode with original songs by Fall Out Boy’s Patrick Stump.

Despite bigots complaining about the show being “inappropriate” for kids, Dead End: Paranormal Park is definitely targeted at a younger audience than its source comics, and some of the more intense or tragic elements of the source material have been toned down. Even toned down, however, the story builds in compelling directions, and I’m definitely curious to see how it might continue based on both the developing character relationships and an audacious cliffhanger that’s certain to upset the religious right even more than the show already has. Dead End: Paranormal Park is not the best version of itself it could be, but even with my frustrations with the animation, I’m happy the show exists.