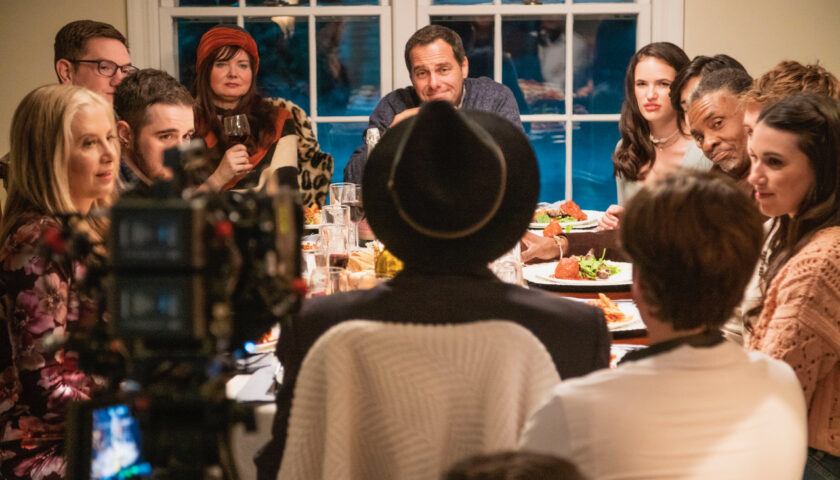 Over the years, there have been countless family-centered rom-coms that never amount to anything aside from a way to kill time. Eric Ustian’s Most Guys Are Losers is just that. It’s an unoriginal slog with very few redeeming qualities.

It tells a very simple story that follows a young couple, Sandy (Grace Fulton) and Bo (Michael Provost), as they must confront her father, Mark (Andy Buckley), and win his approval of Bo. Writer/director Eric Ustian doesn’t deviate from the usual formula. It goes through the motions, with the dramatic, intense, and emotional moments all being fairly predictable in the grand scheme of it all.

The film starts out by showing the miscommunication that Mark and Bo have is the result of a mishap during a video call. Then Sandy and Bo get their dream jobs. In preparation for meeting her father in person, Sandy introduces Bo to Mark’s book, Most Guys Are Losers, a book about being the best boyfriend possible. Bo is obviously nervous when they do meet, but since he’s read the book, he’s ready for whatever Mark throws at him.

All of the people in Sandy’s family are pretty generic characters. As mentioned, Mark is overprotective, much to the dismay of his daughter. Sandy’s youngest brother is precocious to the point of it being one-note. Even Sandy’s ex-boyfriend, who isn’t introduced to Bo right away, is so shady it is hard to believe that any person actually likes him. While it may seem that everyone is supposed to be cartoonish, most of the other characters constantly bemoan the over-the-top actions that those characters partake in, making all the action and character motivations feel inconsistent.

If I were to describe the conflict at the heart of Most Guys Are Losers in one word, it would be vapid. There’s very little consequence to the actions of the characters. The stakes are ridiculously low, making many of the plot developments meaningless on a story level. Why do Sandy and Bo feel the need for Mark’s approval? Sandy’s relationship with her father is not super close, so why should we, the audience, care?

The music is used to an obsessive degree. Every time the score would stop, a licensed song would come in, adding nothing. While this next issue will probably be fixed when the movie releases, the audio (specifically the ADR) is noticeably bad, with some scenes having the entire audio track cut in and out at a rapid rate.

On a more positive note, Andy Buckley gives a solid performance. The whole plot device of his character writing a book showing precisely what he wants from someone to be suitable for his daughter is a fun one, even if much of it isn’t shown. Sadly, this lone positive isn’t enough to boost the quality of the film.

Most Guys Are Losers sadly fails at being enjoyable. Eric Ustian poorly directs an extremely by-the-books story that does not make sense narratively. There are many important plot points I did not mention previously because each of them makes the movie even more convoluted.