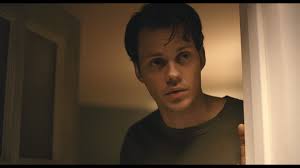 When it comes to portraying sudden acts of violence, “Barbarians” is being released in one helluva week. And nothing about this moodily lit, dinner-party-from-hell film can compete with the real-life drama that unfolded in the middle of the Academy Awards. Or with any other home invasion thriller, for that matter.

Ostensibly held to celebrate the birthday of Adam (Iwan Rheon), nothing about the dinner for four at the film’s center feels celebratory. Adam has been unsettled all day after finding a wounded fox that keeps reappearing; his partner, sculptor Eva (Catalina Sandino Moreno), is excited to live in the kind of chilly modernistic home that just cries out for masked men to enter with weapons drawn; and their friends — influencer Lucas (Tom Cullen, serving B-movie Henry Cavill) and his girlfriend Chloe (Inès Spiridonov) — are there almost entirely to drive the already fragile Adam further off the edge.

There’s a pregnancy, an affair, a massive monolith created by Eva, a real estate deal, a hallucinogenic, and more banal conversation — crypto currency comes up, which tells you everything you need to know about this quartet — than you could find at a Silver Lake brunch. By the time Adam and Lucas are grappling on the floor in a slap fight, you’re almost relieved when masked men enter and tie them all up in a hastily spray painted red oval at just past the halfway point. From there, “Barbarians” is an exercise in escalating violence that culminates in mass casualties.

Writer-director Charles Dorfman has seen the same movies fans of the genre have, and the greatest hits are all here. There are the title cards announcing a new chapter of the story, served with a thudding underscore (very “The Shining”). There’s the scary masks the invaders wear (very “The Strangers”). And there’s a bit of “You’re Next” in there, too, as the invaders realize how vastly they’ve underestimated these four.

The’ve underestimated themselves, too, it seems, because all of them will have blood on their hands by the night’s end. But violence is a slippery slope, and Adam and Lucas were already poised to slide from verbal and emotional abuse into bloody physical altercation by the time they’re given an excuse. From the beginning, Adam and Lucas have the kind of tetchy relationship that feels heavily lopsided, with Lucas passing along birthday well wishes that include his hope that Adam has grown enough to look less like a little boy.

Their needling only grows worse, with the assured Lucas clearly cast as the alpha at the table and Adam the kind of beta who can’t even bring himself to put that poor fox out of its misery. But egged on by the loutish, laddish Lucas demanding that Adam slap him, Adam eventually does — to shock and chagrin from the two women at the table. Before long, glasses of wine are being flung in faces, then glasses are being flung, and then all four find themselves in physical danger from the jumpsuit-clad men who saunter in. But oh, how the tables will turn! We know this because a title card reveals “Tables Turn.”

“What could drive ordinary people to violence?” is the question at the heart of “Barbarians,” where even the men with weapons have a motive. But though Dorfman dresses up that thesis with red herrings and spiked drinks, the film can never settle on a tone. An extended set piece in which the two couples, bound and frightened, huddle together while a stranger smashes art and pottery and furniture has the boisterous swagger of Jack Nicholson’s Joker defacing the museum in “Batman,” but none of the chilling comedy of that sequence. The rapid-fire dinner conversation is a highlight, swiftly exposing all four as bourgeois conventionalists, but seems only to exist to make their descent into adrenaline-fueled violence seem more jarring.

But in the year 2022, we’re grown accustomed to seeing ordinary people reduced to something feral. A grown man slapped another man on live TV during the Academy Awards. People go into battle over the wearing of cloth masks during a pandemic. We’ve reached the depressing stage of our society where taking the tiny step from rage into action no longer seems that big a leap. When it comes to exposing the whited sepulcher of modern life, “Barbarians” can’t compete with the news.