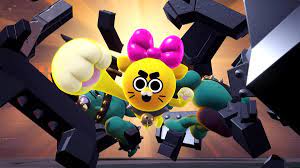 Floating demonic heads, giant lobsters, golden dragons, and an infinite number of powerful (and equally fashionable) bows with which to battle them all. Super-powered and super sassy protagonist Kitty is ready for action in Matt and Paul Layzell’s 3D animated interactive Netflix series, Battle Kitty.

Known as the “Layzell Bros,” the award-winning director duo have worked together for over 10 years creating animated content for Netflix, Cartoon Network, Nickelodeon, Hulu, Disney, Google, and more. Battle Kitty – their first interactive project – follows a rather loud-mouthed, and very yellow kitten whose power is enhanced by the hair bows his best friend Orc creates for him. After escaping his pet captivity with Orc’s much less lovable family, Kitty declares that he and Orc will make their way to Battle Island to fight monsters and earn the title of “Champion!”

“This is, hands down, the biggest thing we’ve done to date,” says Paul. “Our show functions a lot like Super Mario World, where you’re not selecting episodes off a list but choosing episodes off an interactive world map. So, you might see a volcano on the map, and you click on that point, and you’ll get taken to an episode that takes place on that volcano. After you’ve finished whatever experience you clicked on, the map will then change based on what happened in the episode. We’re really excited for the show to come out, and hope audiences out there love it as much as we do. We’re really proud of ourselves and the team who made it possible.”

Matt adds, “Finding efficient ways to keep what was going on in the episodes and the story connected to what was happening in the interactive maps, and having both influence each other while making them at the same time in very different ways… it took a lot of great mathematicians and animation scientists to make this work.”

The interactive, video-game-like experience is the first of its kind at Netflix; the show contains a built-in progression mechanic that unlocks new episodes as viewers diver deeper into the series. Rather than navigating through a maze with the same beginning and end points, watching Battle Kitty is like exploring the different and seemingly infinite branches of a tree. In total, the show contains 31 interactive maps and 160 states of those maps, according to Paul.

“There are secrets on the map that you can only unlock by watching certain episodes and areas of the show that you can only get to once you’ve watched a certain number of episodes,” explains Paul. “It’ll be fun to see how people play with them. It was a lot of work and a lot of planning. Lots of lovely big spreadsheets and wireframes. We often joked to each other that we were making two shows in one.”

“And we have to do every single iteration,” inserts Matt. “Any idea that we had for the interactive map, we had to sit down and do the math on how many iterations it would cause, how many different bits of footage we would have to plan and animate. The show doesn’t run in real-time like a video game. So, every possibility we had to plan, animate, and stitch together in this big puzzle.”

Breathing such complex and interactive life into Battle Kitty was actually not Paul and Matt’s original plan, but one pitched to them by Netflix after the streaming service had already agreed to pick up the series, which began as short Instagram posts of animatic-style comedy sketches.

“The posts featured two characters – Kitty and Orc – and their adventures,” remembers Matt. “It was something that I was doing in my spare time, but we really fell in love with the characters and thought there was something really special there. So, we developed the show and pitched it to Netflix. And while we were fleshing out the world in which Kitty and Orc would live in, we were also offered the opportunity to think about the show in how it could be interactive.”

The brothers say – despite the immense amount of work it would entail – they were instantly thrilled by the idea, as video games were a “big part of the show’s DNA,” as stated by Paul.

“We referenced games like Animal Crossing, Super Mario Odyssey, Kingdom Hearts and the more recent remake of The Legend of Zelda: Link’s Awakening,” he shares. “That was a really big influence for the maps and the animation look we call ‘chibi style,’ where we made all the characters super cute.”

With animation by Lego Star Wars: The Force Awakens’ Plastic Wax, the universe of Battle Kitty – from “Mount Spicy Ice” to “Neon Cove” – is vibrant in color and bubbly in design, harkening back to the graphics of both the Nintendo 64 and GameCube.

“We really thought about the games we loved when we were kids and let that influence the look of the show,” says Matt. “Very early on, when we were deciding how we wanted to animate it, we were really excited to utilize new technologies that were being used to produce shows. So, we wanted to make the show in Unreal Engine, which is used for making video games, but has lots of great features that you can leverage for Kids’ TV animation production. We wanted to vibe to be playing Nintendo video games on your summer holidays.”

But despite the smash-em-up, fists-to-cuffs backbone of the series, Battle Kitty’s world is as well-rounded in its messaging to kids as in its overall aesthetic.

“We wanted the show to have comedy and action, but also have a lot of heart to it,” says Matt. “What I love about the characters is I feel they really represent both halves of my personality. Kitty is the fiery, determined side of myself, and then Orc is the more shy, nervous, self-doubting part of myself. I think everyone’s got those two characters in them. I think everyone’s got a little Kitty and a little Orc inside them.”

He continues, “We love the character of Kitty being so determined, punching above their weight, and wanted to put that message out there for kids. Even if you feel like the smallest person in the room, with the right help and with good friends, you can achieve great things and achieve your goals.”

The show’s creation is a testament to its message – Paul and Matt noting that Battle Kitty would not have been an achievable feat without their team of determined, like-minded, video game-loving creative team members who helped them streamline the numerous branches and creative iterations of Battle Kitty.

“I really hope people love Kitty and Orc as much as we do and that the story of Kitty’s journey resonates with kids all over the world and maybe inspires new generations of filmmakers to experiment with the interactive space and with interactive technology to help complement the stories you want to tell,” says Matt.

Paul adds, “Our show is the first of its kind in that space between interactive and linear storytelling, so I’m excited to see what comes next and hope that it makes at least a few people laugh.”

And while the brothers couldn’t bring all their ideas for the series to fruition, they are crossing their fingers for a Season 2 and an excuse to expand on this already massive interactive world.

“One of our original ideas was there would be episodes where you’d get to customize Kitty’s outfit; it seemed very simple at first but would have been roughly 100 hours of content and totally broken us,” says Matt. “Some things like that were just not possible. At least not this time. Maybe with Season 2? Nothing’s set in stone yet. But we’ve definitely got lots of ideas that we’d love to return to and improve upon.”