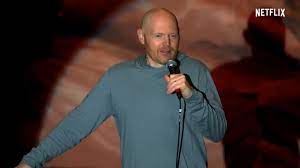 At this point, landing a Netflix comedy special deal and a sold-out live comedy show are two of the easiest ways to identify a good comedian, someone who is clearly on their way up. Still, neither of those two things can necessarily guarantee whether a good comedian is actually great.

To my mind, a mark of a great comedian is their ability to tackle any sudden inconvenience that comes their way and turning into a punchline and a moment funnier than the tragic hilarity that accompanies a comedian being interrupted during his set. The great Bill Burr proves that with a brief moment with his heckler in his latest Netflix special Bill Burr: Live at Red Rocks.

Half an hour into the special, Burr announces to the audience that Burr, known for his temper and angst against the world, is actually a changed person now. Someone from the audience yells “Bullshit” at his claims and happens to get the comedian’s attention. Without missing a beat, Burr addresses his heckler, staring directly at him, “Are you saying that sir because you don’t believe me or ‘cause you don’t want me to leave the angry circle you’re in?” The crowd erupts in laughter. Not one to stop at that, a comically infuriated Burr starts doing impressions of the guy: “Don’t be goin’ and gettin’ happy now. Don’t be goin’ and gettin’ soft on me. Don’t start hugging people and loving yourself.” he yells mockingly. It’s a hilarious throwaway bit, one that aptly summarizes the trademark bro code that frowns upon the idea of an evolved man. At that point, Burr manages to overwrite the heckler by turning him into a punchline. It’s all very seamless, making the interruption look like an act in itself. This in fact is what makes Bill Burr so great — he is constantly on the lookout for plumbing a joke out of any situation.

It’s evident throughout Bill Burr: Live at Red Rocks — the multi-hyphenate comedian’s first Netflix special since 2019’s Paper Tiger — in which the comedian traverses the excesses of cancel culture, feminism, abortion, and his own rage in under 82 minutes. Despite its occasional sameness, the special feels like an effortless return of form for Burr, one that seems necessary given the sheer atrocity of the recently released Bill Burr: Friends Who Kill. Still, it feels a lot like paying an enormous amount of money to watch your favorite live show and then realizing that he is only going to play remixed versions of his greatest hits instead of crooning a new track. Even remixed, the song proves to be hum-worthy.

Directed by Mike Binder, Bill Burr: Live at Red Rocks opens in the same identical fashion of the comedian’s set from Bill Burr: Friends Who Kill. That is to say, his COVID-19 jokes about anti-vaxxers remain insipid and forgettable — a solid proof for why comedians should think of retiring their COVID bits because at this point, they can’t not sound repetitive.

Yet, I wouldn’t say the same thing about Burr’s cancel-culture bit, which although feels familiar, given its destination is the same “outrage has no room for perspective” dead-end, there’s something to be said about how Burr gets there. The foundation is laid by the comedian underlining the stupidity of liberals outraging at the now-deceased Sean Connery for saying something “problematic” back in the 1970s by holding his words against the standards of 2022. The war Burr wages on political over-correctness is designed like a gimmick, one that feels like it is intended to match the theater of wokeness. Coco Chanel’s Nazi sympathising ways is sneakily invoked as are her affiliation with Nazi men before Burr segues into an imaginary slap-off between Chanel and Sean Connery.

Squaring both Chanel and Connery against each is a devious way for the comedian to make Connery’s comments seem more harmless than they are. The comedian’s urgent delivery, which rests both on a convincing argument style and a healthy amount of slut-shaming, and joke-per-minute-ratio is pitch-perfect. If the bit feels invigorating despite the lack of novelty of its commentary, it’s solely because of the person performing it. Especially considering Burr takes it upon himself to not just defend the Connery worldview but also wholeheartedly perform it.

For someone who has single-handedly shouldered rage-fueled humor as a legitimate comedy genre, Burr, as it goes without saying, excels at physically exerting himself to comedic effect. Take the way he walks on stage while recounting a bit, the pitch of his voice (impressions of conservative Americans are always men in his standup; liberals get a more feminine accent), or the way he performs him losing his shit. In Bill Burr: Live From the Red Rocks, they definitely add up to the punchline. If Burr makes the hour-long set look easy, it’s perhaps because at this point in his career, talking to a crowd for one hour should be easy for a comic like Burr to pull off. In here too, the comedian effortlessly exhibits just how proficient he is at storytelling, at mythmaking, and at blending fact with fiction to earn a laugh. Still, I wouldn’t exactly say that the Netflix special manages to allow for a thorough peek at the originality of Burr’s comedic voice, offering only brief highlights.

Toward the end of the special, comes its standout moment: Burr starts recounting a story about a life-altering epiphany that revolved around the comedian doing shrooms and confronting the source of his profound loneliness: the memory of his childhood, which till this date, resembles nothing short of a battle. A period in his life that internalized the idea that violence and rage are his only modes of expression, a way of thinking that he confesses has come to alter due to his four and a half-year old daughter. It’s a really moving set about the ills of family inheritance that Burr infuses with wit, candor, and unbelievable comedy. Some of the best comedians in history possessed this rare ability of making complex confessionals look simple and simply hilarious. Burr does both in this last segment, confronting his own mortality in a manner only he can. Bill Burr: Live at Red Rocks proves that it’s always great to hear Bill Burr’s voice but this moment made me wish that the comedian gave us more of a reason to justify missing it.