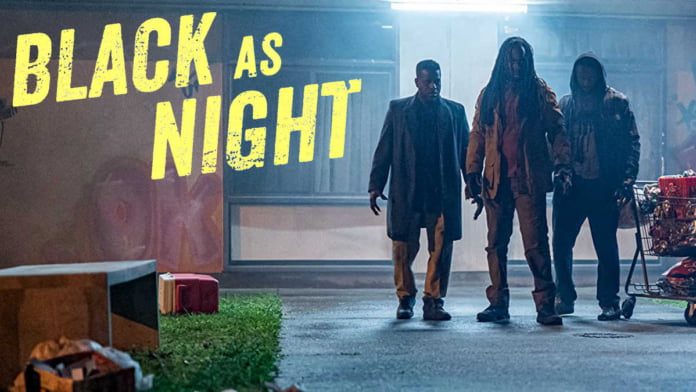 The “Welcome to the Blumhouse” series of horror features has done well so far in showcasing diverse emerging talent, if not in hitching relevant social themes to stories that are actually scary. Another case in point is “Black As Night,” which joins “Bingo Hell” in a second annual quartet of Halloween releases rolling out on Amazon Prime.

Maritte Lee Go’s solo feature directorial debut is a sort of female African-American spin on “The Lost Boys,” chronicling what its heroine pegs as “The summer I got breasts and fought vampires.” It works well enough as a teen supernatural melodrama, reasonably slick if a tad silly — less well as straight-up horror, let alone as a commentary on race-centric historical and political issues that never feel more than pasted-on here.

Fifteen-year-old Shawna (Asjha Cooper, who is and looks considerably older) was born in the immediate wake of Hurricane Katrina. That disaster destroyed her family’s former house, as well as the stability of her mother (Kenneisha Thompson). Now the adolescent daughter lives with dad and brother in a new home, while drug-addled mom has exiled herself to a decrepit housing project where seemingly everyone is either a dealer or a customer. It’s a place Shawna dislikes visiting, even more dangerous than she knows — as we glean at the start, when a man collecting recyclables with a shopping cart is set upon by ghouls. They don’t want his cans, but his blood.

She’s enlightened on that front all too soon, however. Walking home alone at night from a party attended with gay BFF Pedro (Fabrizio Guido), she spies another indigent man similarly attacked, and in trying to intervene gets attacked herself. Saved by a passing car, she arrives home with telltale neck puncture wounds. The next day, Pedro laughs off her claim of being jumped by “a group of homeless vampires,” but stops laughing once they discover Shawna’s mother has already … well, “turned,” and is prone toward bursting into flames from sunlight exposure.

This confirms that vampires exist and are vulnerable in the ways familiar from traditional fictive depictions. Ergo the teen duo arm up with garlic, silver, wooden stakes, etc., further enlisting the support of a school crush object (Mason Beauchamp) and vampire-literature enthusiast (Abbie Gayle) to stop an apparent undead infestation among the local Black poor and marginalized. They realize that the headquarters for this plague is a French Quarter mansion under the command of 800-year-old Keith David, and that there’s also a rival “good” vampire force headed by Sammy Nagi Njuguna.

That’s quite enough intrigue for one movie. Sherman Payne’s screenplay explains it all as culminating long-running rebellions against slavery and other forms of racist oppression, as most recently manifested in New Orleans’ greatly reduced African-American population post-Katrina. (In their different ways, both “Black” and “Bingo Hell” involve gentrification pushing out established communities.)

Illustrated in an animated sequence, this thought-provoking backstory no doubt looked good on paper, yet it never manages to become integral to the principal goings-on. Which, in their “30-year-old-looking teenagers traipsing around offing fanged immortals” gist, feels more like lightweight juvenile adventure à la Hardy Boys or Scooby-Doo. Those weightier themes fall well short of effectively shadowing the entire narrative as in Jordan Peele’s horror films, say, or the incarnations of “Candyman.”

As a result, none of this comes off as very perilous, suspenseful or even credible on its own fantasy terms. It doesn’t help that the movie sports entirely gratuitous “Dear Diary”-style narration from Shawna, who’s forever underlining the obvious by saying things like “Did that really just happen? Was I just bitten by a vampire?”

Nonetheless, Cooper and fellow castmates are appealing enough, and the film moves at a brisk pace with some attractive packaging elements. Even if it doesn’t add up to a particularly chilling atmosphere, DP Cybel Martin’s location-shot imagery has a lush color palette nicely amplified by Ryan Martin Dwyer’s production design. “Black As Night” goes down easily enough, especially in visual terms. But one wishes its story content had enough edge and ballast not to vanish from the memory quite so easily afterward.