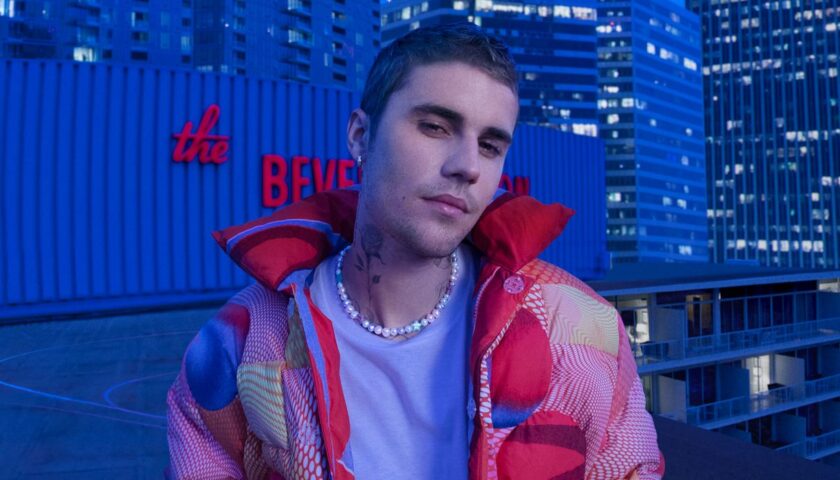 Justin Bieber: Our World will make its worldwide premiere on Amazon Prime via Amazon Studios on October 8th. The Michael D. Ratner-directed documentary was produced by Ratner’s OBB Pictures, Bieber Time Films, and Scooter Braun Films, and gives a backstage view of the singer’s return to the stage after a three-year hiatus from performing live.

The film follows Bieber as he prepares for T-Mobile Presents New Year’s Eve Live with Justin Bieber. The intimate concert of 240 invited guests took place on the rooftop of the Beverly Hilton Hotel and streamed live as 2020 came to a close. Ratner followed Bieber and his team for the month leading up to the event; the film also includes self-shot footage from the singer and his wife Hailey.

“Performing live and connecting with my fans through music is deeply meaningful to me,” Bieber said in a statement. “Especially during the past year, being able to provide a service and share my gifts to bring some happiness to people during such a sad and scary time has meant the world to me. This film documents an intense and exciting time, preparing for a return to the stage during this season of real uncertainty. Coming together with my team, overcoming the obstacles, and delivering a special show, surrounded by friends and family; it’s all here.”

The documentary follows Ratner’s work on Demi Lovato: Dancing With the Devil, which he directed and produced. In a statement, Jennifer Salke, head of Amazon Studios, called the film “a raw and unprecedented snapshot of Justin and those closest to him during a pivotal time in his life and career.” Added Ratner: “Make sure to watch it with the volume maxed out.”

In March, Bieber released his sixth album, Justice. He will perform “Stay,” his Number One hit collaboration with the Kid Laroi, during the 2021 MTV Video Music Awards on Sunday.

“I just wanted to create a night that was going to bring people together, and people could just let go and enjoy themselves,” says Justin Bieber in the opening of the new trailer for his Amazon Original Movie, Justin Bieber: Our World. “I’m excited to get back on that stage, make people smile, make people happy.”

The stage he is referring to was located at the Beverly Hilton Hotel, mounted for a special live stream concert on the most recent New Year’s Eve, marking a major return to performing after a highly-publicized hiatus from stadium concerts. The 94-minute doc covers the month-long prep and logistics of mounting a unique production for 240 guests (and the world online) as well as all of the other new things in Bieber’s life, as a husband and a reformed pop star.