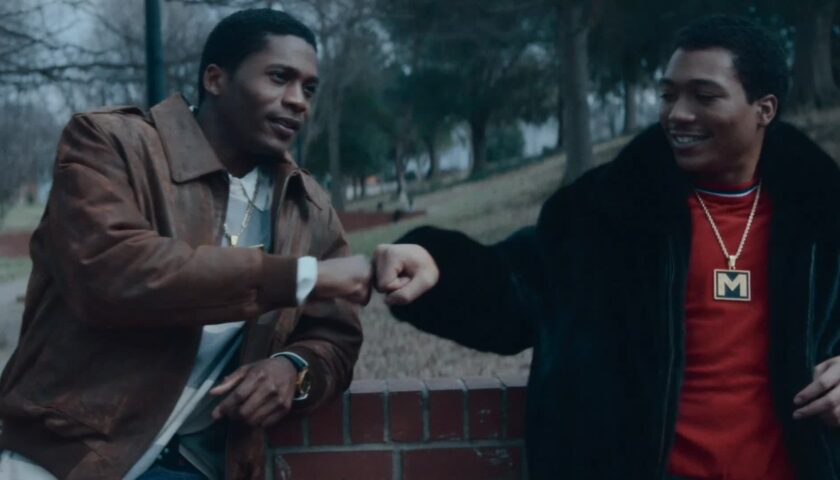 BMF, or “Black Mafia Family,” is the story of how Demetrius “Meech” Flenory and Terry went from their humble working class beginnings in southwest Detroit to dominating the drug trade in the city by the late 1980s, expanding nationwide until an FBI bust in 2005. There are lots of connections back to the Flenorys’ story, even if a lot of it is fictionalized; one of them is that “Big Meech” is played by his son, Demetrius “Lil Meech” Flenory.

A disclaimer says that this story is “loosely based on truth,” and while many of the names and situations have been fictionalized, “a lot of this shit might have actually happened.” Then we see a quote from Demetrius “Big Meech” Flenory, saying that the hustle was the only way to get his family out of poverty. There’s a picture of the real Meech with his brother Terry.

We briefly see an older Meech (Jon Chaffin) in 2005, coming back to the old neighborhood after a few years, full-length fur coat on his back, getting love from everyone at the party he attended.

But when we go back to the ’80s, we see that the Flenory brothers are part of a nuclear family who work and struggle to make ends meet. Their father Charles (Russell Hornsby) extolls being on time and working hard. Their mother Lucille (Michole Briana White) also works and takes care of the brothers and their little sister. Meech has just gotten a job at Wendy’s… or so they think. He’s actually rolling with a local drug dealer, and Terry insists they’re a package deal.

Flash to the later ’80s. Meech (Demetrius ‘Lil Meech’ Flenory — yes, the real Meech’s son) and the still-in-high-school Terry (Da’Vinchi) are already building a small empire with their crew “The 50 Boyz”. They’ve got the flash, the cars, the suits. But when a larger crew starts feeling that they’re encroaching on their turf, the confrontation turns ugly when Terry produces a gun; Meech gets out of it by giving up a corner. Still, Meech is looking at the big picture and thinks in the end, his negotiating skills and their crew’s ability to sell will win out.

In the meantime, the Flenorys are struggling. Meech and Terry have hidden where they’ve gotten their clothes and other stuff from their parents, until Charles finds out that they’re behind on their bills and the house is in foreclosure. Meech offers them money to get out of the situation, but Charles refuses to take what he considers dirty money. After his parents find Terry’s gun, Meech takes the fall and gets kicked out of the house.

To increase business, Meech decides that the crew is going to make a more potent kind of crack, and they end up doing such good business that their supplier slows them down, which leads Meech and Terry to make a move to have their own operation. “See It, Touch It, Obtain It,” they say. But a guy named Lamar (Eric Kofi-Abrefa) is back from prison and wants his old territory back.

At first glance, it looks like BMF is glorifying the hustle. It looks like the Flenory brothers are going to be portrayed as on the rise until they reach a level of power that even their young selves never would have imagined, with no sign that there’s going to be a fall. But showrunner Randy Huggins, a veteran of Power and a number of other series, is actually setting off Meech and Terry’s situation against the struggle that their blood family has to make ends meet while making an honest living.

That’s the dynamic of BMF that will be interesting. As Meech and Terry start forming this Black Mafia Family and gain power, they’re still going to struggle against the fact that their parents and sister are church-going working stiffs who are always behind the financial 8-ball, but prefer that to the lives that their boys have built for themselves. Meech and Terry chose to lift themselves out of poverty by dealing drugs, like so many kids that grow up in their situation. Unlike a lot of those people, though, they have a strong family unit as a support system. That push and pull will drive the show’s dramatic pulse.

We’re looking forward to seeing Snoop Dogg as Pastor Swift (a role Huggins offered to 50 Cent before his producing partner turned it down); he’ll be part of the push and pull between the brothers growing their empire and the family’s wish that the two of them go to college and use their smarts for something legitimate. There will also be the pull of parenthood for Terry, which will likely make him conflicted about what he’s doing.

We do have to spotlight Demetrius “Lil Meech” Flenory; playing your father in your first big acting role comes with huge expectations, and Flenory does a fine job making the 20-something version of his dad into his own character. You can see in his performance the vision that “Big Meech” had for the empire he ended up creating, and that ambition is clear from the first moments we see “Lil Meech” on screen.