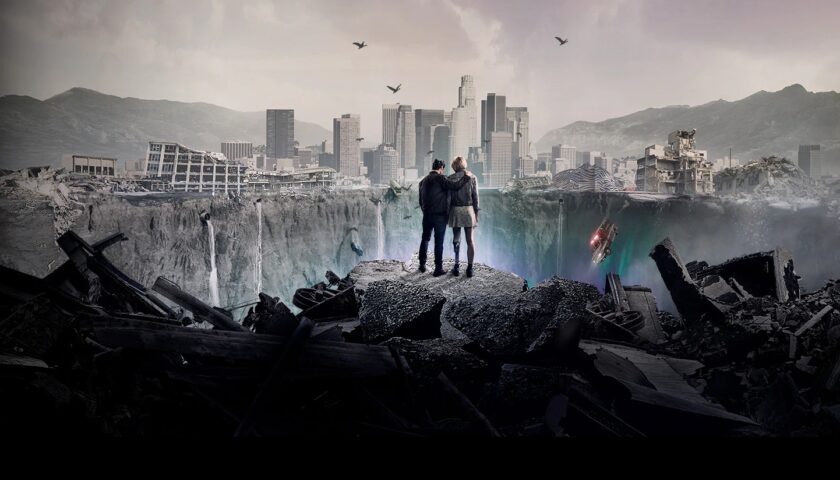 Not far into its first episode, La Brea comes out and says what we’re already thinking: “Maybe we’re just in an episode of Lost.” The comparison is unavoidable and, unfortunately, not all that favorable to La Brea. In the 17 years since Oceanic 815 disappeared over the Pacific, there’s been no end of shows trying to replicate its magic — and while La Brea isn’t all bad, it’s just the latest reminder that the Lost formula is harder to master than it looks.

The hourlong drama opens on a typically hellish morning commute on Los Angeles’ Miracle Mile, which becomes much more literally hellish when a massive sinkhole opens under the La Brea Tar Pits. The sudden void swallows cars and buildings and dozens of people, including half of the Harris family: Mom Eve (Natalie Zea) and teenage son Josh (Jack Martin) fall in, while teen daughter Izzy (Zyra Gorecki) and semi-estranged dad Gavin (Eoin Macken) are left searching for answers on the surface world.

Those pulled into the sinkhole are dropped through a glowing gash into a strange primeval land, where sabertooth tigers still roam and cell service is entirely nonexistent. (Which does have its upside, one character points out: “No more Twitter!”) Meanwhile, back in the part of Los Angeles that didn’t implode on itself, Izzy and Gavin become convinced that the event has something to do with the cryptic visions that have been haunting Gavin for the past three years. His potential insight attracts the attention of the Department of Homeland Security, which knows more than it’s willing to let on about what’s really going on.

In the first two episodes given to critics for review, La Brea is all breathless narrative momentum. In addition to the big, obvious question of WTF is going on with the sinkhole, La Brea seeds a bunch of smaller mysteries and urgent mini-crises around its lush green fields: Will this character survive an animal attack? What’s with the Mustang full of heroin? Are those po-faced girls (Lily Santiago and Chloe De Los Santos) part of a religious cult or something? What is that angsty therapist (Chiké Okonkwo) trying to hide? Is that one dude (Stephen Lopez) ever gonna find his glasses?

On the one hand, all this heavy plotting makes La Brea go down smoothly. If you get bored investigating one particular oddity, there’s always another just around the corner. As great as the series is at raising new questions, however, it’s not at all clear how good it’ll be at answering them. A storyline in episode two about a cop (Karina Logue) searching for a missing man turns out to be less an actual subplot than an instance of the show obscuring basic information for maximum dramatic potential. And when there are significant reveals — like clues about where exactly this pristine wild land really is — the show tends to repeat them over and over, as scattered characters in both worlds come to the realization at different times.

Moreover, the emphasis on plot twists steamrolls the finer character work needed to maintain our interest in the long run. While most of its ensemble will no doubt become more fleshed out as the season goes on, the first two episodes have most of them set to either “secretive” or “panicked,” which aren’t so much character traits as states of being. Not even the Harrises are much more at this point than generic lead characters who assume our sympathies simply because they’re upset onscreen a lot and haven’t done anything yet to indicate that we’re not supposed to like them.

It seems telling that the character with the most defined personality so far is the only one who’s not injured, fearing for a loved one or otherwise burdened by any real sense of agency despite, you know, being trapped in a bizarre and distant wild land with no way out. Scott (Rohan Mirchandaney), an affable Australian pothead, adds a much-needed dose of levity to the grim desperation radiating from everyone around him, making him an easy early favorite among the ensemble.

Even Scott can only do so much, though. There are occasional hints of the much more entertaining show that La Brea can be, usually in the series’ most sensational moments: the dramatic announcement of another unbelievable discovery, the hero shot of an extinct bird squawking at Los Angeles traffic. Intentionally or not, these feel like the series leaning into the over-the-top ridiculousness of its own premise, and juicing it for silly fun.

Mostly, though, La Brea seems to be playing it perfectly straight, hoping its lavish CG budget and plentiful plot twists will be enough to make it appointment TV. And yet, for a series that opens on a massive sinkhole eating up an entire L.A. neighborhood, La Brea feels too middle-of-the-road to make much impression at all.