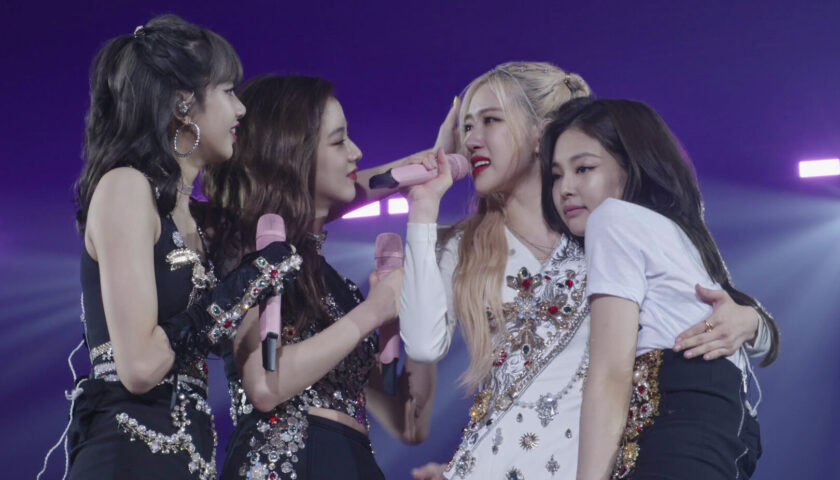 In August of 2016, powerhouse entertainment conglomerate YG Entertainment did something it had not done in seven years: launch an all-girl K-pop group from its stacked assortment of multi-talented “trainees,” sprung from its very own homegrown talent farm and unleashed on the world. That’s where Caroline Suh’s surprising and personal documentary “Blackpink: Light Up the Sky” starts, as a crowded room full of bloggers and journalists clack away at their laptops while a nervous foursome prepares to meet the world. While the years leading up to that initial reveal of soon-to-be-megastars Blackpink could easily shape its own documentary — Suh’s doc does touch on some of its biographical high points — “Blackpink: Light Up the Sky” is more fixed on getting to know that nervous foursome on their own terms.

The result is an intimate look at one of the most popular musical acts in the world, the kind that have so many accolades on their dedicated Wikipedia “awards and nominations page” that a copious amount of scrolling is required to reach the bottom. Little of it will surprise the group’s long-time fans (or, as popular parlance now deems them, “stans”) and it will likely spark interested newbies to seek out further information, but “Blackpink: Light Up the Sky” does a stellar job of introducing Jisoo, Jennie, Rosé, and Lisa as individuals. The K-pop phenomenon may still feel new to some consumers (it’s not), but if nothing else, Suh’s film handily does away with the sense that these superstars are simply part of a pre-packaged cultural machine.

Seemingly designed for American audiences — the film starts with a series of American anchors, from Michael Strathairn to Stephen Colbert, introducing the group before adding in their Korean counterparts — the documentary tracks the group from their early years to their blockbuster domestic debut at Coachella in 2019. Clocking in at just under 80 minutes, Suh’s film still manages to ramble, with Coachella eventually serving as a logical endpoint because, well, it has to end somewhere.

More compelling than working up toward that “one big important performance” trope is the film’s recognition of just how much work went into Blackpink before such splashy concert was even a distant dream. Three years after that tense introduction to the world — an event the group’s members recall in charming detail — Suh finds Blackpink literally hurdling toward the next big step, the foursome crammed into an SUV in between obligations on a slammed schedule. As the ladies answer basic questions about their careers and lives, it’s not initially obvious that “Blackpink: Light Up the Sky” will offer up more than just canned responses. Then de facto leader Jennie sighs about always feeling “halfway there” (to the next show, the next album, the next whatever), and suddenly, it seems as if Suh tore down some unexpected walls.

As the ladies invite Suh in, so too does the film let in its eager audience, as the group hits up the studio with mentor Teddy Park (a former K-pop star turned producer), listens to a new cut of a song with Lady Gaga, and eventually sits for one-on-one interviews that offer more unguarded moments. Suh flirts with other storytelling techniques, from Park semi-narrating the film’s first act to a series of scenes in which the girls watch old videos of their work and titter over their younger selves, even accompanying Jinsoo on a visit to her makeup artist and Jennie during a tough Pilates session. But what’s most effective are those interviews, with each member opening up at her own pace, sharing their story against the backdrop of home videos and early competition footage.

While “Blackpink: Light Up the Sky” doesn’t offer the sort of in-depth examination of the “trainee” experience that seems destined to emerge at some point — any program often described as a “boot camp” for hopeful performers, and that can see some would-be stars spending an entire decade in the boarding school-like world surely has some secrets to share — it doesn’t try to gloss over that side of K-pop. As Suh’s film grows more personal, as her subjects further open up, anecdotes and observations about their time as trainees (each Blackpink star spent about five years in training before their debut) unfurl.

It’s in those stories that Suh and her subjects interrogate the documentary’s deeper questions, not just about the cost of fame and how each of these mega-stars feels about it, but the path that led them to it. Rosé struggles with writing her own music, even as she explains how important it is to her. Lisa ponders her early years and how her tastes have changed. Jennie recalls not feeling as if performing was a natural fit for her. Jinsoo considers her role as the group’s eldest. They all remember feeling out of their depth when they started training, and they all happily reflect on meeting each other and forming a group that felt natural in an environment in which teamwork and bonding wasn’t always championed.

Those moments of deeper reflection don’t often find a place in glossy docs like “Blackpink: Light Up the Sky,” early examinations of young stars on the rise that typically eschew looking beyond basic biographical facts and a general feeling of “isn’t this cool?!” At the end of Suh’s film, the foursome wonder about what their lives might look like in 10 or 15 years, already reflecting on what this all might look like in the rearview mirror. While “Blackpink: Light Up the Sky” doesn’t offer a full view, it possesses enough self-reflection — and smart subjects unafraid to engage in it — that we can already guess how it will all unfold, with the same charm and talent that already got them this far.