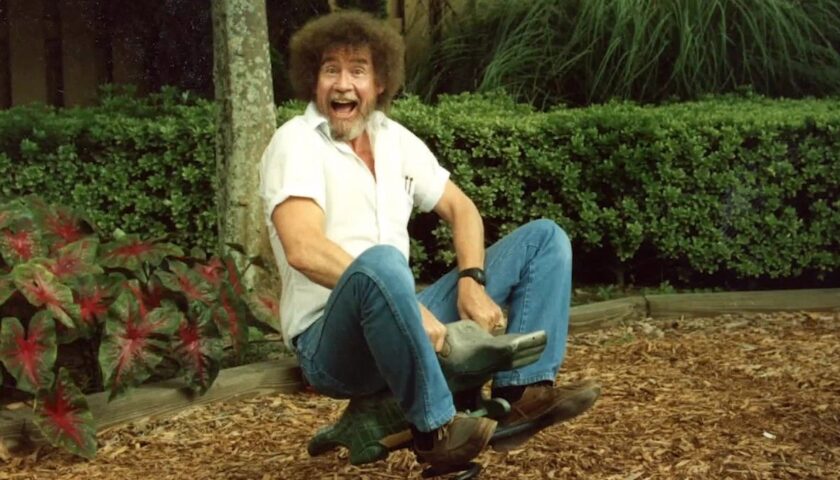 He painted soothing landscapes, gently addressing his TV audience in a near-whisper. You can do this, he’d say to his viewers. Anyone and everyone can paint. Bob Ross was a walking affirmation, so cheerful and calming that he became a pop culture symbol of peace and happiness, with a dab of kitsch. It’s not uncommon to see a hipster in a Bob Ross T-shirt. But where did that shirt come from? How did Ross’ visage, topped off with his signature perm, become so ubiquitous? The answers, contradicting a man who loved the word “happy” (a happy cloud, a happy tree), are quite sad. The new Netflix documentary “Bob Ross: Happy Accidents, Betrayal & Greed,” produced by husband-and-wife team Melissa McCarthy and Ben Falcone, paints a picture of naked opportunism that shattered Ross’ legacy. It’s the story of how a man became an industry, and how his family was gradually, systematically left out in the cold.

Ross was wildly popular from the start, parlaying his success as an art instructor into a high profile on public television’s “The Joy of Painting.” He painted pretty landscapes in less than 30 minutes, often taping multiple shows in one day. Sometimes, he would bring out and brag on his son, Steve, a serviceable painter and teacher in his own right.

Director Joshua Rofé uses archival footage, and contemporary interviews with Steve Ross and other Ross allies, to illustrate the artist’s rise. Ross embraced his celebrity and cultivated his image carefully. But this isn’t a film about an overtly famous guy who was really an ogre. Ross, on balance, comes off as a good guy. The betrayal and greed promised by the film’s title come from outside, in the form of a couple who looked at Ross and saw a meal ticket waiting to be redeemed.

Before he became a low-key TV star, Ross went into business with Walt and Annette Kowalski, an older couple who grew smitten with Ross’ talent and bonhomie. Annette traveled and taught workshops with Ross; according to the film, they also had an affair. Together with his second wife, Jane, he started Bob Ross Inc. with the Kowalskis. The TV show, which ran from 1983 to 1994, did well, but the real money came from the sale of paints, brushes and other supplies.

The deeper the film gets, the messier and more complicated the Ross affair grows, especially after Jane dies of cancer and Ross himself is diagnosed with non-Hodgkin’s lymphoma. There’s a deathbed marriage, multiple lawsuits (the Kowalskis, who did not participate in the documentary, are portrayed as extremely litigious) and a lot of ill will. The film makes the case that the Kowalskis bilked Ross’ family out of their share of money from Ross’ image and likeness, and steamrolled other artists and instructors as well. And it makes this case well.

Ultimately, the point is that the darkness of avarice and baser human instincts can lurk behind even the cheeriest facade. When you see those Ross shirts, underwear and Chia Pets, you’re seeing the fruits or acrimony, and, as the film argues, betrayal and greed. His happiness was real. And so is the sadness he left behind.