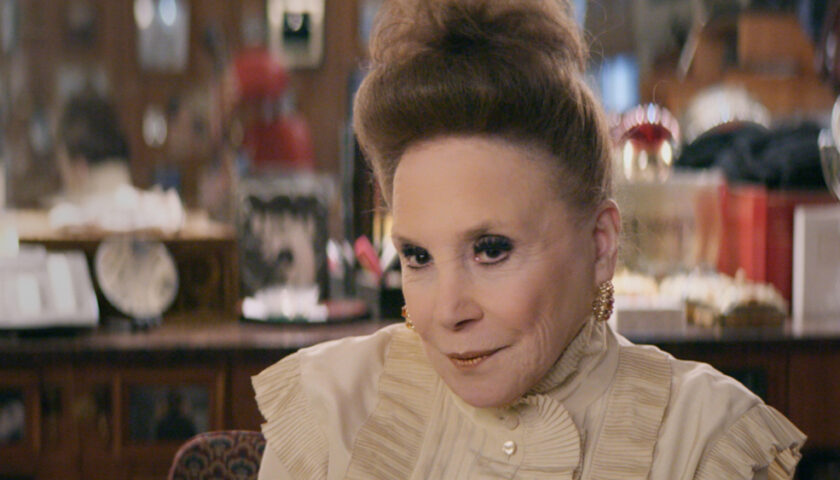 In normal times, the columnist — now 91 and still publishing multiple times a week — goes out to do reporting for her column in the New York Post. The column is a strange mélange of quotes from celebrities, conservative political analysis, invective against foes real and perceived, anecdotes about the peculiarity of life in Manhattan, and aphorisms and puns. (She recently asked readers, in a column that also quoted Matt Damon and excoriated Kamala Harris, “What do you call a skeleton out in freezing temperatures? A numb skull.”) About the only consistent thing about her column day to day is the tone — choppy, clipped, and utterly direct, treating the reader as someone intimate enough with Adams that she can speak frankly, and in shorthand.

It’s fitting that “Gossip,” Showtime’s new documentary series on which Adams is the central figure, takes a similar attitude to its subjects. “Gossip” is, at once, a personal and professional biography of Adams, a look at the rise of Rupert Murdoch as a media mogul stateside, a jaunty set of anecdotes about the rivalry between the Murdoch-owned Post and the New York Daily News and the stories both papers covered, and an analysis of the rise of President Donald Trump. These are done to varying degrees of competency, and even a personality as big as Adams’ can’t hold this documentary together.

She does try. Adams speaks to the camera from her apartment in Manhattan, wallpapered with her past Post covers. She has endless contempt for her nemeses and boundless mercy for friends from Imelda Marcos to Trump himself. Adams is a dynamic speaker who holds one’s attention as she skitters through stories from her long career; this series at times recalls “Pretend It’s a City,” in which Fran Lebowitz, another discursive thinker from a vanished New York, holds court. And like that Netflix show, “Gossip” accommodates its star’s blind spots. In this documentary, Adams has no perspective on Trump at all — not even that he’s been good for the country, which might at least be interesting as a starting point for debate. What we get instead are endless descriptions of Trump’s personal generosity to Adams over the years, including helping her scatter her late husband’s ashes from his helicopter.

This successfully makes the case, as is made elsewhere, that Trump was good at working the press — so good, in fact, that years later, a professional rumormonger remembers them with greater clarity than any time Trump made news. He was in his time as a New York real-estate developer a master at leveraging the inherent scandal of his life. But throughout “Gossip,” there’s a fundamental uncertainty about how to express any larger insight. Director Jenny Carchman previously made, with Liz Garbus, “The Fourth Estate,” about the New York Times covering the early Trump presidency; “Gossip” has less urgency, and maybe less on its mind. This documentary wants to elevate and find meaning within the lowbrow — a worthy goal, if one that’s become a lot less novel in recent years. But it’s most clear what “Gossip” doesn’t or can’t achieve when a talking head, a former editor of the website Gawker, tells the camera, “It’s amazing that a gossip columnist character has run the country. That’s pretty amazing. I think I’ll stop there!”

Why stop before saying anything at all? “Gossip’s” shortcomings seem to suit its subject. It is, in the main, a vehicle for delivering incident, personality, and verve: it will leave you with the understanding that the New York City tabloid press was among the authors of Trump’s success. It imparts little sense of what anything it has to tell us means — or, indeed, how that press exists today beyond Adams. Like any gossip columnist worth her salt, the documentary tends to favor those who’ve agreed to go on record: We get much from Adams’ Post colleagues, many of whom aren’t in the game anymore, about subjects including how Harvey Weinstein played the tabloid game. (That these journalists are, effectively, the ones who got played as Weinstein obscured the long-rumored truth about his predations is a fact that thrums uneasily in the background.) We also hear from Perez Hilton, the aughts-era blogger who has by now had many venues to express his observations and regrets. TMZ — probably the dominant shaper of gossip in the 21st century — takes a backseat. Consider that the recent New York Times-produced documentary “Framing Britney Spears” told a complete story of how celebrity image is made and broken by the media, and in about a quarter of the running time.

There’s an indulgent refusal here to cut short Adams, who comes over the course of her stem-winding monologues to seem a bit like the butler at the center of “The Remains of the Day.” She has put a lifetime of labor into a system that is vanishing, and that in its moment of peak power worked towards ends whose culmination we can only see in retrospect. (Tabloids didn’t make Trump, despite what this documentary alleges, but they helped.) She is, in the end, a curious choice as guide to this world, both because she has resolutely avoided its changes and because she simply cannot reach a place of seeing Trump objectively.

But who else might have done it? Modern gossip dissemination is done by hardcore operators at TMZ or anonymous voices on DeuxMoi; Adams’ peers are gone. That fact of that passage is an interesting one, and makes “Gossip” a tribute worth watching for those who are already engaged by the subject. But just as Adams’ column now only makes sense to her longtime readers, this series is unlikely to convince the general public that the stories it tells deserved a shelf life much longer than that of a daily newspaper.