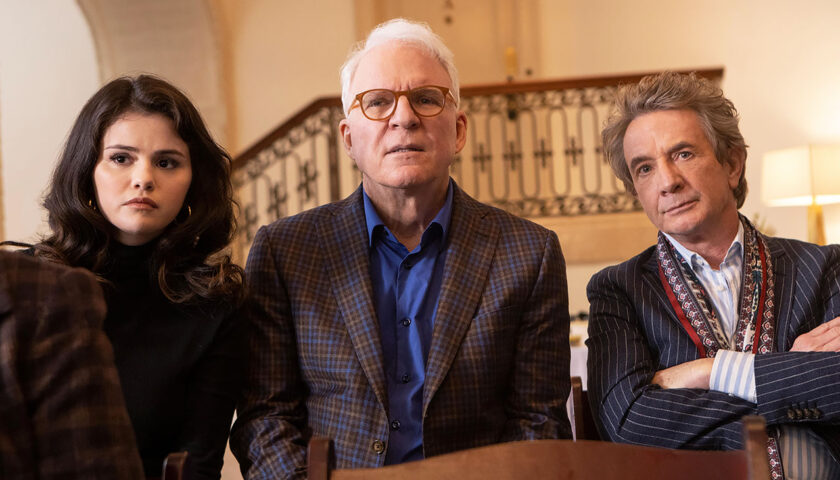 A sardonic millennial, a down-on-his-luck Broadway director, and a TV has-been team up to investigate the death of a neighbor in their New York City apartment complex. It’s a premise that could fit a variety of storytelling styles — gray-toned procedural, dizzy caper, quiet meditation on urban isolation.

You’ll find a little bit of each in Hulu’s Only Murders in the Building (premiering August 31). The 10-episode series, co-created by Steve Martin and Jonathan Hoffman, is a solid, star-filled comic mystery that’s at its best when it chooses character over broad comedy.

Mabel Mora (Selena Gomez), Oliver Putnam (Martin Short), and Charles Hayden-Savage (Martin) all live in a grand Manhattan co-op called the Arconia. When a fire-alarm evacuation forces them to interact beyond their typical elevator head nods, the trio discovers they share an obsession with a hit true-crime podcast, All Is Not OK in Oklahoma. Upon returning to the Arconia, they find police responding to the suicide of another resident, Tim Kono (Julian Cihi). By the end of the lively premiere episode, the new friends — seeking answers and some human connection — decide Tim was murdered and that they’re going to find the culprit, all while recording a podcast about their adventure.

That podcast compels Charles, Mabel, and Oliver to start chatting up their other neighbors, including Teddy Dimas (Nathan Lane), a deli king and one of Oliver’s former Broadway investors; Oscar (Aaron Dominguez), the son of the Arconia’s superintendent; and Sting (as himself).

Only Murders captures the determined aloofness of NYC apartment living; most of the inhabitants of the Arconia know Tim only as “the guy with bad asthma” who kept them all from using their fireplaces. There’s an undercurrent of solitude in early episodes, which plays out in lovely moments of melancholy whimsy: Oliver imagines himself free-falling from a staircase and bouncing right back up, just as Yoann Bourgeois did in his 2018 dance set to Clair de Lune. Charles engages in a call-and-response duet with his fetching neighbor Jan (Amy Ryan) — she on bassoon and he on concertina — across the echoey divide of the Arconia courtyard.

As the season progresses, though, the pathos largely gives way to farce. The situation surrounding Tim’s death is far more complicated than the podcasters could have imagined, sending them on an ever more hectic chase after leads. Hoffman and his team spin a well-crafted yarn, with clues and reveals meted out at a satisfying pace. The podcast spoofery is an ongoing treat (Oklahoma, for example, is sponsored by “the Milton and Miriam Swan Foundation for the Arts and for Dissolving the Federal Reserve”). Gomez proves to be a deft comic actor, delivering Mabel’s “okay, boomer” one-liners with bone-dry deadpan. Longtime collaborators Martin and Short remain ideal comic foils; as Oliver, Short tosses off erudite critiques with effortless panache. (“It’s so PBS-y, like a Ken Burns documentary on the history of boredom,” he says of Charles’ podcast narration.)

The Only Murders writers have a bit too much fun with their red herrings, resulting in episode-long detours. (When the gang’s podcast gets a cult following, one fan grouses about “a whole episode with no stakes.”) Ultimately, the most powerful moments don’t have anything to do with the (alleged) murder. I found myself more invested in the fraught, tragicomic tale behind Oliver’s notorious Broadway flop, Splash! The Musical, which cost him far more than his career. Or Charles’ relationship baggage, which he frantically empties on Jan’s doorstep in an effort to salvage their disastrous first date.

Late in the series, the chief villain threatens the podcasters, demanding they tell their listeners that Tim Kono killed himself because of “loneliness, or some thinky shit like that.” Only Murders delivers above-average laughs, a clever mystery, and a starry cast. But it’s hard to shake the feeling that the show missed an opportunity to be something special, if only Martin and Hoffman had allowed it to be a little less kooky and a little more thinky.