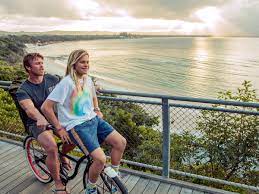 Every now and then, an exciting new talent bobs up out of the flotsam and jetsam of current releases, grabs your attention wholeheartedly and leaves you excited to see where their nascent career will wash them up next. All flowing blond locks, twinkling eyes and a big, cheeky grin, Rasmus King is one such fast-rising star. Great in ABC’s surfie drama Barons, and also in fantastic Paramount+ live music-charged movie 6 Festivals, he has more than a touch of a young Heath Ledger’s rapscallion charm about him.

Rockit is a sweet but restless lad who doesn’t fit in at school, where circling bullies cruelly dub him ‘dum dum’. It’s a cuss his dad Bosch – WestWorld star Luke Hemsworth bringing an equally appealing, roguishly ocker swagger – insists should land them with a clobbering. But Rockit just wants to make peace, not war.

He may be a teenager, but he’s still just young enough to totally hero worship his dodgy (but not unkind) dad with an adorably naïve fervour. So much so that in some of the sweet scenes that pass between them in the film’s first act, King appears even younger than he actually is.

It’s easy to buy into their complicated relationship. Despite the gruffer aspects of the role, and his swear jar-filling dialogue, Hemsworth has never been more likeable. They share incredible screen chemistry that hauls you into the vagabond blues that follow.

You see, Bosch might have a big heart, but he’s also a bit of a loose unit. While it’s undeniably true that he absolutely loves his son, with a refreshing ability to show that physically with plenty of sloppy kisses to Rockit’s noggin, he’s also the leader of a weed-dealing surfie gang. It’s safe to say that he has a lot going on and may not be the best role model.

Drawn from a true story, this hangdog tale takes a turn for the uh-oh when Martin Sacks’ bent cop Derek turns up out of the blue with his sidekick Keith (Michael Sheasby), whose loyalty to Bosch is confused. They try to press-gang Bosch into upgrading from a cruisey deal growing and dealing weed to shifting bricks of coke, and it all gets a bit messy when he refuses. Not wanting to hang around and face the consequences of resisting, Bosch pulls his son out of school and they hit the road heading to hippy-dip Byron Bay.

Of course, Rockit is pretty cool with the deal, assuming it’s a bonding exercise. Settling into new digs, he soon bumps into Savannah La Rain’s Ash-Ash (I have no idea why everyone has such EXTRA names in this movie) and experiences the rosy glow of young love.

There’s also a chance for Rockit to reconnect with his missing-in-action mum Elizabeth. As played by ever-welcome Eden star Leeanna Walsman, she wrings a lot out of a little screentime as something of an unreliable lush you just know is going to let him down all over again. But for all the bittersweet shot at healing the Byron Bay connections offer, it’s not exactly out of the way, and soon the bad boys in blue are hot on their heels.

But don’t go into this breezy misadventure expecting Animal Kingdom. It feels much more like a low-key stoner movie than the latest gritty dispatch of Australian yeah-noir, to co-opt a term coined by a snappier writer than I. Most likely to appeal to the YA market, teen audience members may need to self-censor in front of the parentals when rolling off the eminently quotable potty mouth sparring that shoots back and forwards between Hemsworth and King, clearly having a hoot.

A crack-up, it’s daggy in an endearing way that soaks up every ounce of visual appeal from the film’s astonishingly lush settings, dazzlingly captured by cinematographer Ben Nott and set to a guitar riff-heavy score by Brian Cachia. As with Barons and 6 Festivals before it, Atkin’s movie also makes the most of King’s surfing prowess, splashing out on some gnarly sequences that amplify the blissed-out vibes. It’s a fun debut that promises good things to come from the director.

A feel-good affair, while Rockit’s romance is sweet, a dalliance between Bosch and a beach babe named Deb, played by Home & Away alumna Isabel Lucas, feels surplus to requirement. But really, it’s the rocky father-son bond that’s the real love story at the heart of the movie. And it’s pretty darned cute.