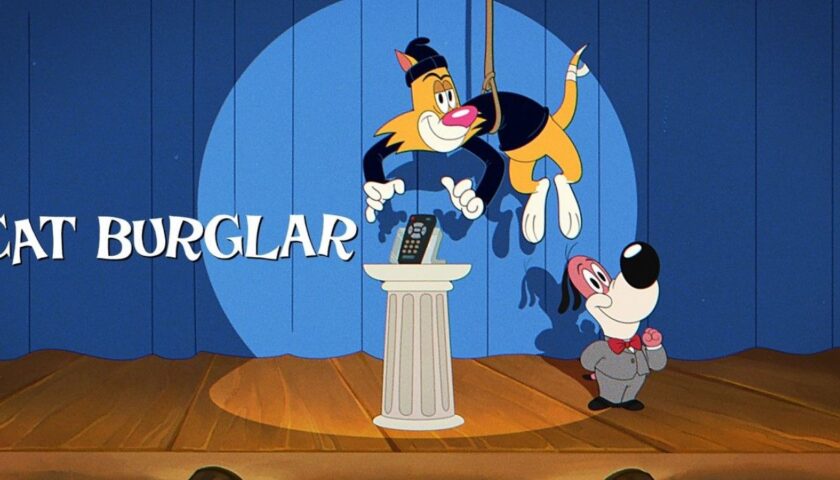 Knowing that Netflix’s “Cat Burglar” was created by Charlie Brooker of “Black Mirror,” and that the “Black Mirror” take on a choose-your-own-adventure episode (2018’s “Bandersnatch“) represents one of that show’s biggest horrors, I kept waiting for “Cat Burglar” (out today on Netflix) to take some terrible turn of existential dread. But after playing through several scenarios, the opposite proved true. From Brooker, “Black Mirror” producer Annabel Jones and supervising director Mike Hollingsworth (“BoJack Horseman”), “Cat Burglar” is as straightforward a take on Tex Avery style cartoons as its unusual format allows.

Following in the footsteps of other interactive Netflix titles like “Bandersnatch” and the surprisingly successful “Unbreakable Kimmy Schmidt” movie, “Cat Burglar” lets viewers steer the story by making choices onscreen along the way. In this way, the plot also acts as a mission: get from point A to point B without making a choice that ends in such a disaster that you get punted back to the very beginning. In “Bandersnatch” and “Kimmy Schmidt,” the options affect the direction of the narrative. That’s not really the case in “Cat Burglar,” which has a much simpler plot (“a cat needs to outsmart a dog guard in order to burgle a museum”) and shorter runtime (about 15 minutes to get from Rowdy Cat eyeing the museum’s giant walls to snatching the coveted painting). In fact, the choices that sporadically pop up onscreen have nothing to do with what’s actually happening in the story itself.

Instead of giving the viewer, who’s effectively playing the part of the thief, the choice of what to do next, “Cat Burglar” presents rapid fire trios of questions that must be answered correctly — or else the cat loses a precious life. The questions range from actual trivia (“men who walked on the moon”;”now that’s a real mountain!”) to absurdist word trickery that might trip you up in your rush to click the right answers (“not Beatles tracks”; “a GPS says…”). In true Looney Tunes fashion, there’s seemingly no shortage of creative ways for Rowdy Cat or Peanut the Guard to suffer, and their abrupt deaths can get a bit grisly. For the most part, though, “Cat Burglar” is a pretty family friendly heist, which might surprise those checking it out based on its “Black Mirror” bonafides.

I didn’t get to try “Cat Burglar” out on my television set proper — but for what it’s worth, after exploring it at length on my phone and computer, I’m not sure I missed out on much in that respect. For as fast as the trivia questions speed by, I was grateful to be able to click the options as quickly as possible with my own finger or mouse rather than scramble for the remote every time. There was even something that felt especially fitting about “playing” Cat Burglar on my phone as if it were a true game rather than this hybrid Netflix “experience.”

Don’t get me wrong. As written by Hollingsworth and James Bowman (“Tuca and Bertie”), “Cat Burglar” would be just as bonkers and fun to watch even without the added pressure of having to keep Rowdy Cat alive. (And not for nothing, I wasn’t even sure how much I was on Rowdy’s side, anyway…what can I say: I’m a dog owner who found Peanut too cute to root for his downfall!) The script, with its myriad twists and earnest embrace of bygone animated wackiness, is sharp and funny no matter which scenario unfolds. It almost makes you want to mess up a little, if only to see more of the bizarre turns the heist might take. When you do get to the end, and Rowdy reveals another new painting (there are seemingly seven possible masterpieces up for grabs), it’s undeniably satisfying to “win” the game. “Black Mirror” might be fueled by revealing harrowing truths about the evolution of technology, but it’s a relief to realize that “Cat Burglar” is simply here to delight in its possibilities that are just plain entertaining.