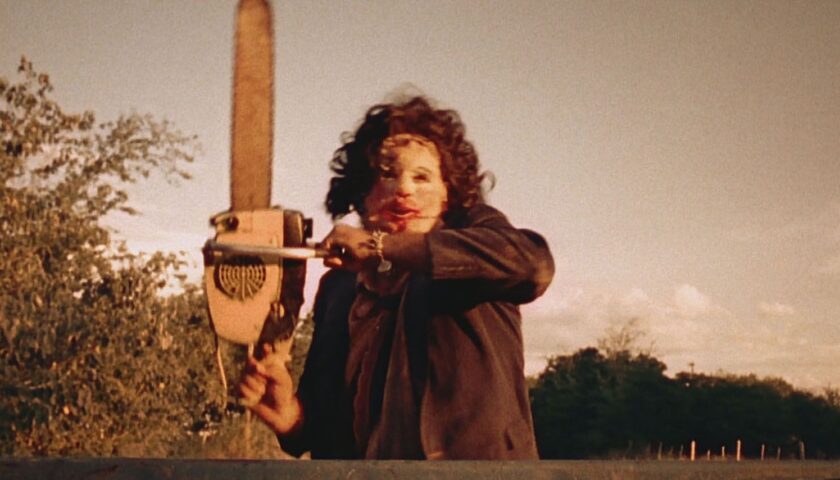 Some chefs aparently now own half of Texas including the town of Harlow. They plan an auction to sell the everything in the town. The two kids, a girlfriend of one of them, the sister of the other travel to Harlow, and of course quickly run into them creepy Texans. The guy who runs the gas station who sells all sorts of Texas Chainsaw Massacre memorabilia and some guy who arrives to fill his truck with gas. He carries a gun (the horror!). THe are also stopped by the Sherrif. The kids outragraged drive away and arrive in a deserted Harlow. The lady who runs the orphanage is still inhabiting her house. When the kids try to kick her out she starts having a heart-attack. Her remaining orphan is none of other than soon-to-be-again Leatherface.

The woman dies on the way to the hospital in the cop’s van. For some reason the kid’s girlfriend is riding along for no reason other than to be one Leatherface’s early victim. With the woman dead, Leatherface freaks out, attacks everyone in the van which causes them to crash. He drags the woman out of the van and proceeds to make his mask with her face. Then he kills everyone injured in the van.

Back in the town, the investors arrive for the auction by bus. Sister who is a traumatized high-school shooting survivor warms up to truck guy. Eventually, Leatherface arrives in town as it becomes night, finds his chainsaw and starts dispatching people there culminating in a massacre in the bus where all the investors have fled.

We also meet the survivor from the very first movie, Sally, who has been looking for Leatherface all her life. She picks up an emergency call and makes it to the town to at last face Leatherface together with the two sisters.

TCM 2022 is a refreshingly short at 1:14 hours, somewhat uninspired, but efficient gory horror movie. It doesn’t bother to give us any compelling characters let alone a sympathetic charismatic lead. The cast rather is bizarre in its utter lack of appeal. And it took 4 casting directors for this. Without someone to root for, things quickly fall flat. Not even Leatherface is particularly menacing as people usually place themselves in a position to become a victim. The movie worth watching but it’s nothing special.