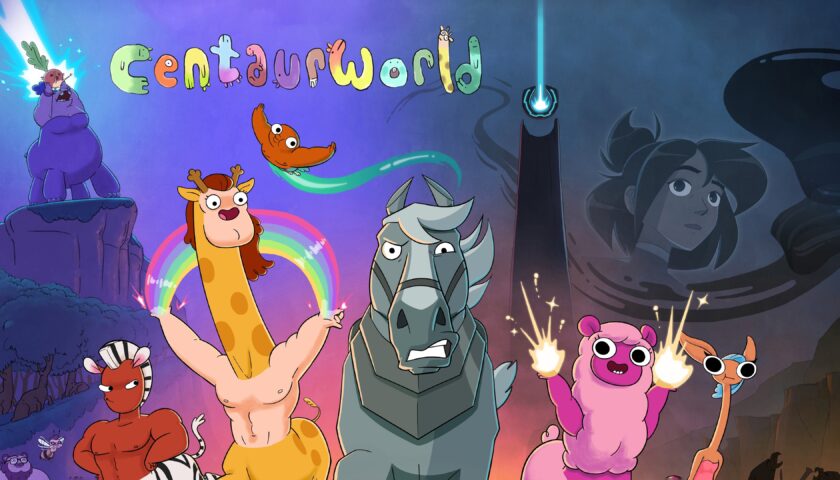 At this point, it’s a given that we’re living in the “golden age” of television; somewhere in the neighborhood of 500 new scripted series drop each year. With so much to choose from, that means TV can get daring, specific, and sometimes, weird as hell. Superheroes trapped inside an I Love Lucy pastiche? A creepy animatronic doll calling a murderous game of Red Light, Green Light? In the era of peak TV, grade-A oddity is only a mouse-click away.

But no show in 2021 is more weirdly specific — and specifically weird — than Centaurworld. Created by Megan Nicole Dong, the Netflix series is a wild alchemy of epic fantasy, trippy animation, next-level fart jokes, dark discursions on overcoming trauma, deep emotional catharsis, and, uh… musical theater. The show premiered in July, and Season Two is dropping December 7.

Centaurworld is set in a candy-colored fantasy land where every living thing, from worms and trees to hippos and badgers, is, you guessed it, a centaur. It’s aimed at kids and families, but it also deals in absurdist humor and dark themes that will resonate with adults crouched in front of their laptops at midnight. It’s the only show where you can watch an anthropomorphized antelope try to stuff an entire tree into a portal in her stomach, then turn around and hear two Broadway stars sing a heartbreaking duet about grief and loss.

When Dong was first pitching the series, she knew she had created something that, though it was a joy to experience, was almost impossible to describe. “It was such an out-there idea that I felt like you had to perform it, or do the ‘show, don’t tell’ thing,” she says, chatting over Zoom from Los Angeles. “I had these kinda crappy piano tracks on my phone, and I would just pitch through the whole first episode, and I would do all the voices and sing the songs.”

Here’s a crack at telling, though: Centaurworld centers on Horse (Kimiko Glenn), a, um, horse who’s only ever known a life of war alongside her beloved Rider (Mueller). But then Horse falls off a cliff and wakes up in Centaurworld. Desperate to get back to Rider, Horse forms a reluctant alliance with a merry band of all-singing, all-dancing weirdos: sheep-taur Wammawink (Megan Hilty of Smash), zebra-taur Zulius (Parvesh Cheena), giraffe-taur Durpleton (Radnor), finch-taur Ched (Chris Diamantopoulos), and gerenuk-taur Glendale (Dong). The self-styled Herd embarks on a quest across Centaurworld, visiting a series of increasingly strange shamans to collect pieces of a magical item that, when assembled, will open a door between universes. Along the way, they encounter everything from a cat-taur fashion show to a rogue, naked mole rat–taur named Comfortable Doug (Flula Borg).

If you’re wondering how anyone could dream up a concept this deliciously bizarre, thank Dong’s high-school show choir. “I was obsessed with musical theater, but it wasn’t something that I ever was that seriously interested in,” Dong recalls. “I’m growing up as an Asian American kid in a Southern California town that had a lot of emphasis on academics, and I thought that there was only one path that I had to go down, which was like: Study really hard, get into a good college.”

But fate intervened. In ninth grade, Dong had one slot left to fill in her AP-heavy course schedule, and a timing conflict landed her in the only class that was still open: show choir. “It wasn’t what I was expecting,” she says. “I was really shy and introverted, and that experience was so transformative for me. And it actually led me toward pursuing my artistic side, which was something that I thought I wasn’t supposed to do.”

Years later, after rising through the art and animation departments on shows like Metalocalypse and films like How to Train Your Dragon 2, Netflix Animation gave Dong the opportunity to pitch her own series. And while she was brainstorming, her mind returned to that nervous teenager who first fell in love with musical theater.

When conceptualizing Horse, Dong says that she “wanted to tell the story of a character that thought they were supposed be more serious, or came from a completely different trajectory, who wound up in this like, Muppety, singing, dancing, sparkly place. And in the end, that place and the characters she meets there transform her.”

Dong says that the Muppets and other Jim Henson creations like Labyrinth were a major influence on Centaurworld. But as you might guess from its wide-ranging blend of genres, she cites a laundry list of inspirations: films The Wizard of Oz and The Lord of the Rings trilogy; stage shows Les Misérables and Fun Home; musical TV series Crazy Ex-Girlfriend and Flight of the Conchords; and perhaps most surprisingly, 2000s sci-fi drama Fringe. (“I loved how they dealt with alternate universes and their effects on each other,” Dong says.)

In addition to creating, writing, directing, and acting on Centaurworld, Dong is also an executive producer. And if that weren’t enough, she also writes a big chunk of the songs herself — no mean feat, considering there are at least three per episode. Their tone and subject matter ranges from absurd (“I Stealz So I Can Feelz”) to heart-wrenching (“What If I Forget Your Face”) to haunting (“The Nowhere King”). Her co-songwriter is fellow executive producer Dominic Bisignano. And much like Horse and Wammawink, the two were thrown together and learned to collaborate on the fly.

“When [Dominic] came on board for the second episode, we co-wrote some songs together,” Dong explains. “We got in a room, and we’re like, ‘This is going to be superawkward. But let’s do this bizarre musical trust fall.’ And it was really fun just getting in there and doing that. Then we split everything up, and we were recording demos in bathrooms and these, like, glass telephone booth pods that were around the studio. It was very, very collaborative.”

Those tracks are brought to vivid life by the aforementioned killer voice cast. “Being at those records was amazing,” Dong says. “It was described by our story editor Meghan McCarthy as like being at Tiny Desk Concerts that no one would ever see. You’d have these world-class musicians come in and perform these songs and do all this acting, and it felt so intimate.”

After the first season’s intense finale (no spoilers), Season Two finds Horse and the rest of the herd traveling Centaurworld to recruit an army to fight the sinister Nowhere King (Kiss Me, Kate Tony winner Brian Stokes Mitchell) — with hilariously mixed results. Dong says that she wanted to bring Horse further out of her shell, as well as to highlight some of the show’s side characters.

“In Season Two, we deal a lot with impostor syndrome,” she explains, “with [Horse] coming to terms with her own limitations and learning to relinquish some control and trust her friends and family. And that’s tough for her as a warrior. It’s exciting to see Horse pushed further out of her comfort zone, and also to see some of the other characters step into their own.”

Lest things get too serious, Season Two also features, among other things, Durpleton adopting an evil crocodile henchman as his “son”; Glendale doing a spot-on Elizabeth Holmes send-up; and the arrival of a homicidal warhorse named… Becky Apples.

In other words, Centaurworld remains wonderfully unclassifiable. It’s a sui generis cartoon that sprang from a singular mind. And according to Dong, bringing all those ingredients together all comes down to good old-fashioned storytelling.

“I really wanted us to focus on the character relationships, and I felt like having the emotional journey be the glue would make everything work together,” she says. “Like, you could have all sorts of disparate ideas and themes, but if you cared about the characters and felt the family that they were together, that would keep everything flowing.”

And if that’s not your bag, did we mention that Ched can do a magic spell called “handsome for eight seconds,” Wammawink can shoot tiny clones of herself out of her hoof, and the moon has a butt?