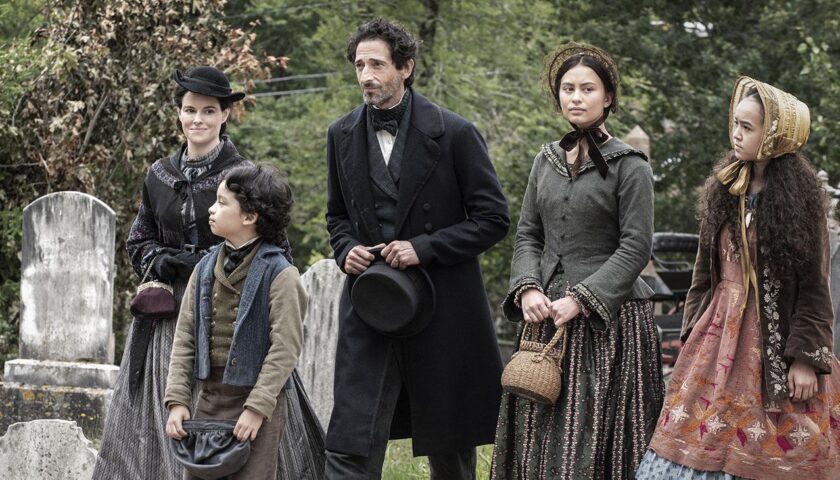 2021 hasn’t exactly been the year of great Stephen King adaptations on the small screen. “Lisey’s Story” wasn’t the cerebral thriller it should have been. And the newest attempt at “The Stand” was a major dud almost from its onset. But, as they say, the third time’s a charm with “Chapelwaite,” a pitch-black horror set in 1850s Maine, where vampires rule the looming eternal night.

Like many great “Nosferatu”-lite narratives, “Chapelwaite,” based upon King’s “Jerusalem’s Lot,” isn’t merely fixated on the bloodthirsty undead stalking the innocent humans trembling in their candlelit homes; it explores our relationship with death, grief, family and what it means to have eternal life. It begins at Chapelwaite manor, where in 1817 a petrified young boy named Charles Boone unsuccessfully attempts to escape his rabid, shovel-wielding father (Sebastien Labelle), who’s dug a grave in his name right outside their home. “Blood calls blood,” he tells his son as he raises the spade, before taking a bullet at point blank range in the head.

It’s a chilling opening sequence, and it sets the tone for the rest of the series from showrunners Peter and Jason Filardi. Flash forward a few decades and we reunite with Charles, now an adult played by star and co-executive producer Adrien Brody, who’s once again looking horror in the face as he cradles his moribund wife (Lily Gao) before she takes her final breath.

“Chapelwaite” embraces or confronts death in increasingly shocking ways. Charles, a sea captain who previously vacated his childhood home under ominous circumstances, has tried to sustain a newer, happier one for himself and his three children — Honor (Jennifer Ens), Loa (Serena Gulamgaus) and Tane (Ian Ho) — until they, too, are met with the same devastation he once did. And it compels him to return to his eponymous abode in Preacher’s Corners, where the demons still reside.

While grief is apparent in many great horror tales, it’s a shame that this one succumbs to the trope of the wife dying to propel the male protagonist’s storyline. She is also of Asian descent, and it would have been nice to see how her race might be explored in the largely white Maine town. Thankfully, though, the world the Filardis bring to the screen still exists within the reality of race. For instance, Charles’ oldest daughter, Honor, has eyes for her father’s Black colleague (Devante Senior) who would, in his words, be “strung up” if anyone were to find out he was with a “white girl.” “I’m not white!” she says. To which he replies, “White enough.”

And when the Boone family realize that they’re not welcome back to Charles’ ancestral town with open arms, he acknowledges that the town isn’t only bugged by his family’s wickedness that led to his flight. “My children’s skin provokes them,” he says.

These moments help ground the foggy setting filled with horse-drawn carriages and mysterious nocturnal creatures as if to say, the undead aren’t the only frightening beings that walk the dirt roads here. But they are the most unsettling, thanks to some terrific effects in a gorgeous production. Upon their arrival, the Boone family is met with nightmares, visions of slimy, black worms up their noses and strange noises in their house that terrify them but threaten to unravel Charles the most, as both he and the audience soon realize that he may have inherited more than just his family’s sullied name.

Madness and the belief that the undead walk the earth often coincide, but in “Chapelwaite,” a place said to be occupied by God-fearing individuals, it’s a point of conflict — to the point of punishment. You can’t believe in both God and that vampires lurk around every corner, even if you have seen the latter with your own eyes and the former remains imperceptible. As the series progresses and the undead come into clearer focus, the ideologies of every character — from Charles and his family to the town constable (Hugh Thompson) and the aspiring feminist writer-turned-Boone family governess (Emily Hampshire) — are shattered.

The affecting “Chapelwaite” is often bloated with subplots of romantic tension and scandals as well as flashbacks that highlight the depth of Boone evil, sometimes to a dizzying degree. But up to its haunting final note, the show never loses its pace or sense of intrigue. If you can imagine, this is even more horrifying than the vampires that attempt to lure the purest souls with the promise that they never have to experience death, that aim to overthrow Chapelwaite entirely. Because it hits you like a stake in the heart.