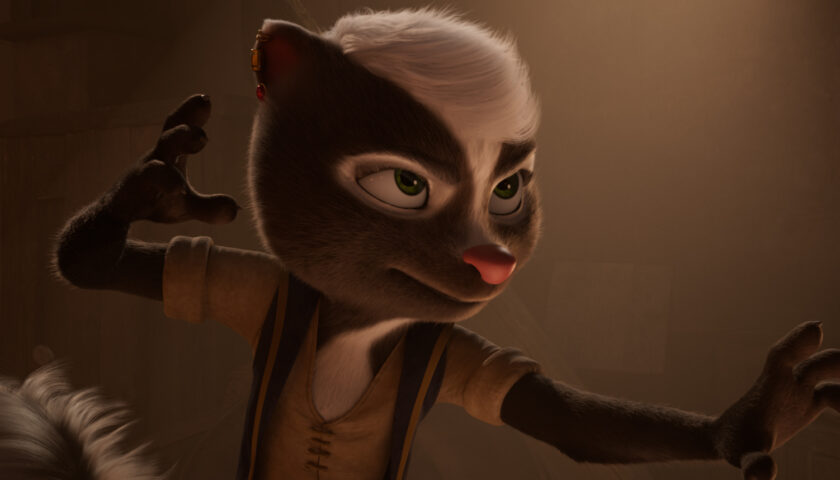 In a world of anthropomorphic animals, hare brothers Peter (Chris McCune) and Lapin (Danny Fehsenfeld) are adventuring princes who seek the legendary Hamster of Darkness. Upon one of their adventures, the two find an orphaned baby rabbit with chicken-like features whom Peter adopts as his son and names Chickenhare (Jordan Tartakow). As Chickenhare grows he learns of his father’s adventures and aspires to be one, but is also insecure in himself due to his mixture of chicken and hare features making him the subject of ridicule which leads to him donning a cumbersome disguise to subdue his chicken features and make himself appear as a “normal” hare. Having come of age, Chickenhare attempts the trials for acceptance to the Royal Adventure Society only for his hare disguise to weigh him down and make him fail. Despondent over his failure, Chickenhare tries to find the Hamster of Darkness only to inadvertently release his wicked uncle Lapin from prison after having previously attempted to overthrow Peter. Seeking to make amends for his mistakes, Chickenhare sets out to find the Hamster of Darkness along with his manservant turtle Abe (Joey Lotsko) and their intrepid skunk guide Meg (Laila Berzins) to try and get the Hamster of Darkness before Lapin.

Chickenhare and the Hamster of Darkness is a loose adaptation of the graphic novel series Chickenhare by writer/artist Chris Grine. Development on an adaptation had begun back in 2011 at Sony Pictures Animation with the blessing of Grine but the project ran into development hurdles resulting in that incarnation of the project being cancelled in 2016. In 2021, it was announced the Chickenhare adaptation had been revived by Sony’s international division as a co-production with Belgian animation studio nWave who’ve had their name on decent films like Son of Bigfoot and its sequel Bigfoot Family as well as The House of Magic, but are more known for their less reputable efforts like the adaptation of Robinson Crusoe that was retitled The Wild Life upon its U. S. release or most infamously The Queen’s Corgi which while a decent financial success had inexplicable references and characters tied to real world events and political figures including references to assault allegations that just didn’t belong in a children’s film. So yeah, nWave has definitely been very “up and down” in terms of quality from their studio, but I’m happy to report that not only is Chickenhare one of the company’s better efforts, it’s probably the best work they’ve done to this point.

The movie’s animation is really quite good. While this is a smaller scale European production without the resources of a Dreamworks or Disney, it’s quite a nice looking movie with smoothly rendered textures and flowing movements in its characters and environments that are quite visually pleasing. The movie does a good job of capturing that pulp “Indiana Jones/Doc Savage” type adventure aesthetic and the opening action sequence with an elaborate obstacle course on a treadmill with multiple elements and dynamic obstacles sets the standard high for the levels of detail you see later in the film. The movie’s bright and colorful with creative designs and pleasing sights and it’s a very richly detailed production with lots to soak in. The action sequences in particular are very strong and the animators have fun with paying homage to tropes of the adventure genre with sequences with “pigmie” natives (guess which species they are) or temple puzzle traps that are quite a lot of fun. The movie even incorporates some brief segments of other animation styles similar to stop-motion and traditional and it’s unquestionably some of nWave’s most ambitious work to date.

The trio of characters we follow on this adventure are quite good with Chickenhare a solid protagonist who we empathize with due to him not feeling “normal” and the crux of his character disguising himself as a full hare by wearing his uncomfortable and cumbersome disguise makes for a strong allegory that can be applied to a number of situations kids feel in how they may not adhere to the state of “normal” society or their peers force upon them and it gives Chickenhare a solid arc of self-acceptance as he goes through the adventure. I also really liked Chickenhare’s relationship with King Peter as CHickenhare’s adoptive father who unlike a lot of movie father’s isn’t stubborn or unaccepting of his son but there is a bit of a divide between them because he can’t fully understand Chickenhare’s situation despite his best efforts and its refreshing to see that kind of relationship in a family film. Chickenhare’s companions are likable and endearing with Chickenhare’s pessimistic and snarky turtle manservant Abe serving as a solid foil to Chickenhare’s thirst for adventure, and Meg the groups skunk adventurer guide makes a nice counterpoint to Chickenhare as someone who’s also seen as an outsider but gives Chickenhare the confidence to be himself and gradually he leaves behind his disguise and allows himself to embrace who he is.

The movie is mostly solid, but it does have some of the tropes you’ve come to expect from modern day animated films with fart jokes (technically fart adjacent, but close enough it warranted a mention), some pop culture humor that doesn’t really land, and on occasion maybe being a bit too glib in some of its deliveries. While Lapin seems like a good villain on paper, I wasn’t a fan of the delivery used for the character which is very foppish and affected and I felt it undercut some of his credibility as a villain even in good moments such as a very well done climax. This may just be a personal preference, but I like villains in animated films to be balanced in 60% serious to 40% comedic and here I felt like they made him a tad too silly for my taste but your mileage may vary. There were also moments where I felt the pacing got a little rough such as a sequence where our group traverse a desert that feels rushed or scenes in the third act where the time compression goes a little overboard, but it wasn’t too distracting.

Chickenhare is a solid adventure film with a likable cast of characters. I can’t speak to its faithfulness to the source material as I’ve not read the original graphic novels, but on its own it’s a fun adventure film with a nice core of being able to accept oneself and not have anyone force you to subdue those traits. The animation is really solid and may be nWave’s best looking and most ambitious work to date, and it creates a world rich in detail and style. It does have some things that don’t land you’ve come to expect from modern day animated films like various stock jokes or a villain who seems like he’s maybe being played a little too broad, but aside from those points this is a solid film I can wholeheartedly recommend.