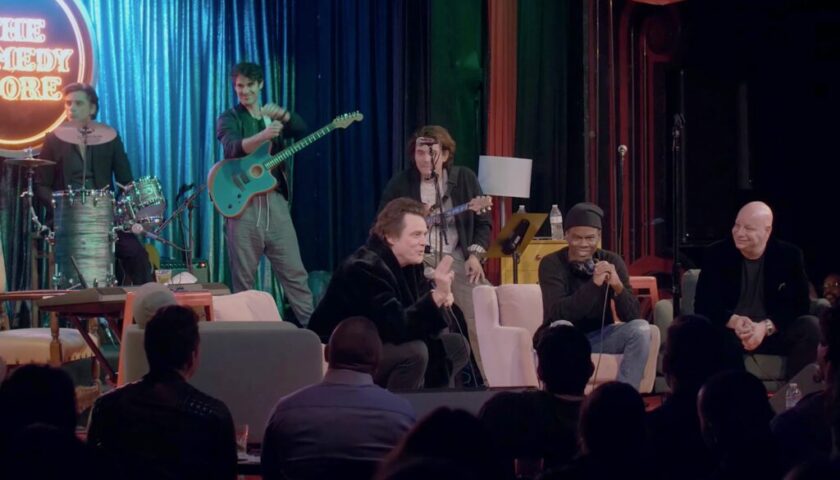 Bob Saget pulled off a remarkable trick over his long and busy career in comedy: He spent the late ’80s and much of the ’90s as one of America’s favorite professional genial dorks, playing a square dad on the cornball and often unbearably saccharine ABC sitcom Full House and ringmaster to America’s less professionally genial dorks — those suffering home-recorded mishaps on the same network’s America’s Funniest Home Videos.

After those gigs ended, though, he directed one very funny and decidedly less clean comedy, Dirty Work, and word about his non-ABC comedy career spread: That Bob Saget fellow really works pretty blue!

This was probably always true outside of his time on ABC — how many comedians can’t hit a blue streak sometimes? — but Saget seemed to particularly delight in puncturing his network-friendly image later in his career. It never came off as malicious, regardless of the actual quality of the jokes: He told dirty jokes with the same sweetness that he dispensed fatherly advice and low-level slapstick on Full House, and that itself was awfully endearing. The same qualities that made him a beloved sitcom dad for a generation of kids made him a beloved jack-of-all-trades comic (stand-up, memoir, hosting, game shows) for years afterward.

Maybe Netflix sensed the symmetry in his career, and picked up Dirty Daddy: The Bob Saget Tribute, a live event recorded a few weeks after his January 2022 death, as a bookend to its Full House sequel series, which reintroduced Saget’s dorky-dad shtick to a new generation of younger viewers. Full House figures into this tribute, of course — John Stamos is one of the main figures speaking of Saget with love and good humor — but the special focuses more on how his bawdy sense of humor dovetailed with his warmth and kindness as a person.

Or maybe Netflix is just finding a strange, new, but compelling niche to conquer: the comedy-special wake. Just a couple of weeks ago, the platform premiered Nothing Special, a home-recorded parting shot from comic Norm Macdonald, followed by a half-hour discussion and appreciation from some of his friends and colleagues. Saget’s career was unexpectedly entwined with Macdonald’s: It was Macdonald who co-wrote and starred in Dirty Work; it was Saget who was the subject of Macdonald’s famously squeaky-clean roast (wherein he essentially performed a reverse Saget, going corny when everyone expected shock); and the two died just months apart.

While there are plenty of similarities between them, there are a few differences to be found in these tributes. Macdonald’s final broadcast had a certain amount of control: Though the circumstances were not his ideal, he was able to perform a new set of jokes from his home and release them to the public, and the commentary appended by other comedians was more of a lovely bonus feature. But Dirty Daddy is even more of a public wake — a messier affair that can make it discomfiting to watch.

To be clear, no one gets sloppy or untoward, and the way it mixes genuine grief with comedians sitting around and roasting each other (and other recently deceased comic legends!) is sometimes downright cathartic. (“It’s not a question of loving Bob, it’s not a question of loving Louie [Anderson, who died within weeks of Saget]… it’s a matter of who’s next,” one of them grimly explains. Later, someone expresses relief that Betty White was the apparent final “rule of three” victim.)

Yet occasionally the question nags anyway: Are we supposed to be seeing all of this? Of course, this was a public event, filmed with a full audience at the Comedy Store — not Saget’s “official” memorial, though clips from that event are shown, too. Friends of Saget like Michael Keaton and Jon Lovitz send in videos of comic business laced with sincere tributes, while in person, a loose core of comics sit around, introducing others and interjecting their own jokes and stories.

This crew includes career roastmaster Jeff Ross, Jim Carrey, and Chris Rock. Some of their riffs are a little half-baked, but are they really there to perform? Carrey goofs around, but also testifies to the “cathedral of love” Saget built around the many people he cared about. But in a room full of comics, the fullest performances are from musicians like John Mayer and, especially, Jackson Browne; they seem to have a better sense of what, exactly, they’re doing there.

Browne’s rendition of his song “For a Dancer” is particularly touching, and Seth Green shows up to break that tension, talking about Browne’s talent for turning the audience reflective. Moments like these make Dirty Daddy worth watching for Saget’s fans. And if it provides some flashes of comfort amidst a bunch of sadness and confusion, well, that’s about as emotionally accurate as a television memorial can get, isn’t it?