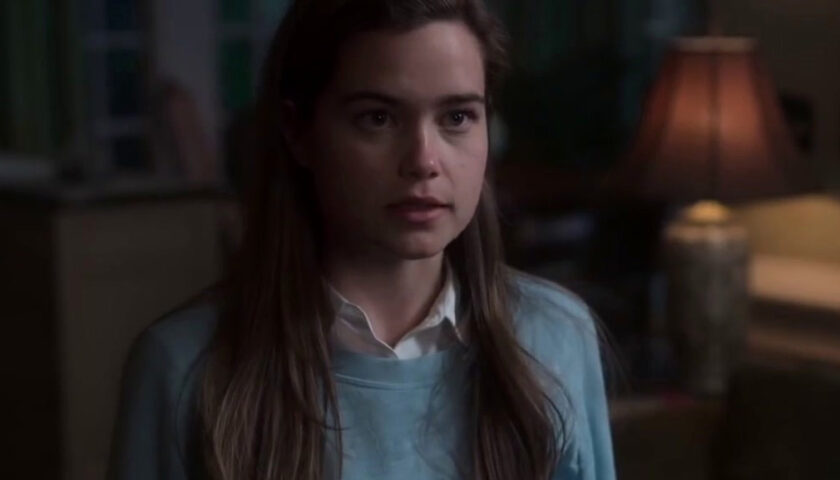 One problem with the many reboots, revivals and legacy sequels haunting the airwaves and multiplexes is how they devalue the art of the old-fashioned ripoff—the underrecognized fact that sometimes mining an old movie or show for inspiration, rather than remaking it directly, can open up new creative avenues. On those terms, the Netflix series “First Kill” seems ideal. Though author V.E. Schwab can probably cite any number of influences, the TV series based on her short story is very much in the vein of “Buffy the Vampire Slayer,” the seven-season classic that fused coming-of-age drama with clever riffs on horror tropes.

Naturally, some tweaks are in order when imitating a show that ended nearly 20 years ago: “First Kill”’s teenage monster-hunter-in-training, Calliope (Imani Lewis), is a young woman of color, and when she falls in love with a vampire, it’s another girl, Juliette (Sarah Catherine Hook), rather than a smoldering male hunk. Like Buffy and Angel before them, Calliope and Juliette feel a dangerous pull toward each other, while each resists the pressures placed on them by their respective heritages: Calliope’s family of high-achieving monster-hunters and Juliette’s family of wealthy, aristocratic “legacy” bloodsuckers, who are harder to kill than normal vamps.

It could all be read an act of reclamation from “Buffy” mastermind Joss Whedon, whose workplace harassment and misconduct has been discussed heavily in recent years. After all, plenty of other talented writers worked on “Buffy”, and plenty more were inspired by the show’s mix of humor, sincerity, and darkness. Here’s a chance to start fresh with a new slayers-and-creatures saga.

All of these factors work together to maximize disappointment in “First Kill”, which ultimately plays more like a throwback to a different “Buffy”-era artifact: the cheesy syndicated action-dramas of the late ’90s. (And not the beloved, knowing ones like “Xena: Warrior Princess”.) If “Buffy” boldly mixed horror mythology and teen comedy with a dash of zippy screwball banter, “First Kill” comes up with a less substantial formula: Add a bad teen soap to a bad family soap, and stir until the bubbles dissipate.

Unfortunately, it doesn’t take long. The flat lighting, generic sets, and canned trendiness of the teenage dialogue start taking the visual fizz out of the show almost immediately. Maybe the show was pinning all of its hopes on chemistry between the show’s stars—the expectation that they could create an instantly ship-worthy pairing. That’s what the first episode builds toward, as Juliette awkwardly nurses an obsession with her mysterious classmate Calliope, before an unexpected clinch that leaves them both wounded, yet both wanting more.

Unbeknownst to each other, both girls are preparing for a coming-of-age “first kill.” Calliope is supposed to slay her first monster, while Juliette is supposed to kill and drink from her first human. (In the first of many convoluted bits of monster business, these vampires take blood pills until they reach maturity, and can drink from humans without killing them, but are expected to act with a haughty carelessness over human life that repulses Juliette, though in kind of a passive, huffy way that seems low-key for someone presumably raised around implications of bloody murder.)

In case Juliette’s name and the feuding families aren’t enough of a tipoff, the characters’ high school is staging a production of “Romeo and Juliet”. Once Juliette and Calliope share their pivotal moment and form a supernatural bond, though, a truly star-crossed relationship fails to materialize. Their romance isn’t really official until (spoiler alert) halfway through the season, and even after that, Lewis and Hook spend surprisingly few scenes together.

The show, its thin lead characters, and their clunky voiceover narration all fixate on the idea of young love as an act of reckless abandon. But apart from a handful of fun stylistic flourishes, like the way Juliette occasionally glows crimson with hunger, it’s a bloodless affair. “First Kill” takes advantage of Netflix content freedom with a few bits of cursing and explicit gore, while appearing downright squeamish when depicting two young women spending time together. It’s the kind of stilted coupling where most of the participants’ conversations revolve around their relationship status.

The material surrounding Calliope and Juliette is shamelessly padded out with similarly flimsy characters—and with Lorde soundalikes on the ceaseless, graceless pop soundtrack. There’s certainly potential fun in idea of an accomplished, well-to-do vampire matriarchy hiding out in present-day Savannah, Georgia. Once in a while, the interfamily backbiting shows some camp bite, mostly courtesy of Juliette’s cartoonishly ambitious sister Elinor (Gracie Dzienny) and the generally bonkers vampire history that goes back to the Garden of Eden.

Mostly, though, the series’ broader conflict is portrayed with a spectacular failure of imagination: Thrill to the sight of Juliette and Calliope’s uptight parents (including “Lost”’s Elizabeth Mitchell) sitting at a table and negotiating! Puzzle over the sheer number of scenes that involve body disposal! It would be one thing if these types of scenes had any deadpan humor or satirical point of view, especially involving the subtextual racial tensions, but they’re mostly played tediously straight.

The show is also, at times, downright confounding in its world-building. Juliette and Calliope’s families keep their secret lives tightly guarded, but the show eventually establishes that humans are fully aware of the existence of monsters, and makes an ill-advised attempt to turn monster-related panic into a metaphor for right-wing bigotry (one monster-hating character talks about the “lamestream media” and is referred to as a “monsterphobe”), even though the show’s non-vampire monsters are clearly less than human.

None of the show’s textual or subtextual divisions—sexuality, race, class, family—have the friction of genuine drama. Everything from its fight scenes to its slang to its visual effects have a pervasive fakeness. In place of discomfort related to either horror or adolescent angst, “First Kill” provokes squirms of embarrassment for everyone involved.