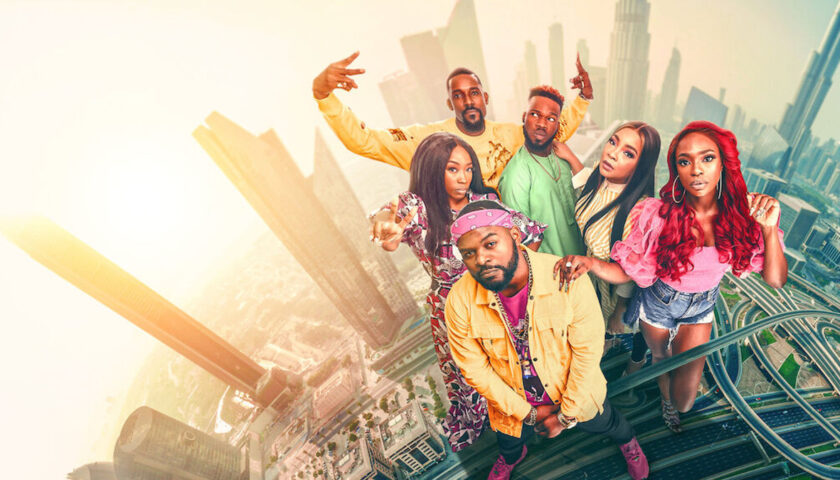 BEECROFTS ASSEMBLE: They gather around a boardroom table in a Lagos office high-rise, arguing about everything and agreeing on nothing – business as usual, then. But they’ll soon unite against a common enemy, Laila (Rahama Sadau), CEO of the Beecroft corporation, who’s ready to defy Chief Daddy’s will and divert the dough elsewhere. And oh, by the way, Laila is another of Chief Daddy’s daughters, from another of his mistresses (notably, in a culture where polygamy is legal, but not necessarily accepted by everyone). The Beecrofts’ impulse is to litigate the crap out of everyone, because do we expect otherwise from a megarich family? Hardly.

But the movie isn’t interested in legal rigamarole, because where’s the comedy in that? Instead, it delves into the theoretically amusing struggles of its many individual characters. Chief Daddy’s offspring Femi (Folarin “Falz” Falana) failsons his way through the plot as a wannabe rapper dubbed Big Money Famzi, one helluva ironic moniker since he has no money, and also no flow or decent rhymes. His mother Lady Kay (Ajoke Silva) throws a birthday party for herself, sparsely attended by begrudging friends and family. Warring sisters Tinu (Funke Akindele-Bello) and Teni (Kate Henshaw) – who run a clothing store with “auntie” Nike (Shaffy Bello) – find themselves battling for the affection of the handsome Prince Sonny (Uzor Arukwe). Soccer star Dammy (Mawuli Gayor) seems like he has it good with a robust career and personal brand, but his scheming manager upsets his engagement to Ada (Beverly Naya) by arranging a dinner date with a sexy pop star – and then he injures his hamstring during a charity match.

The Beecrofts are public figures in a downward spiral exacerbated by one of the granddaughters, who dishes slanderous gossip in internet videos watched by millions. The aforementioned subplots meander on with the family fortune struggle overarching plot sort of almost barely percolating in the background. What with all the half-siblings and paramours coming out of the woodwork, this family wasn’t particularly into togetherness in the first place, but now it’s on the verge of splintering apart exactly when it should be coming together for the sake of gigantic piles of money. But maybe it’s not always about the money. Maybe it’s about accepting reality, uncomfortable as it may be, and making the best of things?

Chief Daddy 2 is glossy and ambitious, an ensemble piece with a cast of big-name Nollywood stars – some of them award-winners – that aims to be like a broad, amiable Hollywood comedy. But as is the case with such American movies, its screenplay is a liability. It spreads its many characters too thin, doesn’t land enough good jokes and is drawn-out and repetitive. It opens with a flip-the-table reveal and ends with a wedding, upsetting approximately zero cliches as it works its way through 112 minutes of poorly executed comedy and overly familiar situations, which vaguely point at the weary and decrepit idea that families need to overcome their petty differences and come together to reach a common goal. Tell us something we don’t know.

What the film needs is editing – one during the writing process, and another to develop a sense of comic timing. Some story elements that should be more critical to the plot are all but forgotten (Laila, the de facto villain here, disappears for long stretches of the movie) for elongated meanderings through Femi’s quest for fame and fortune (a scene in which he tries to sell himself by crashing a marketing dept. meeting fails to yield a single smirk) and Dammy’s myriad troubles (too many toothless arguments with his soon-to-be wife), and both characters’ arcs are at best crudely stapled to the larger inheritance plot. Femi and Dammy share a heartfelt conversation or two that are easily the movie’s best moments, but they’re not enough to lift this film out of a tedious and moribund muck.