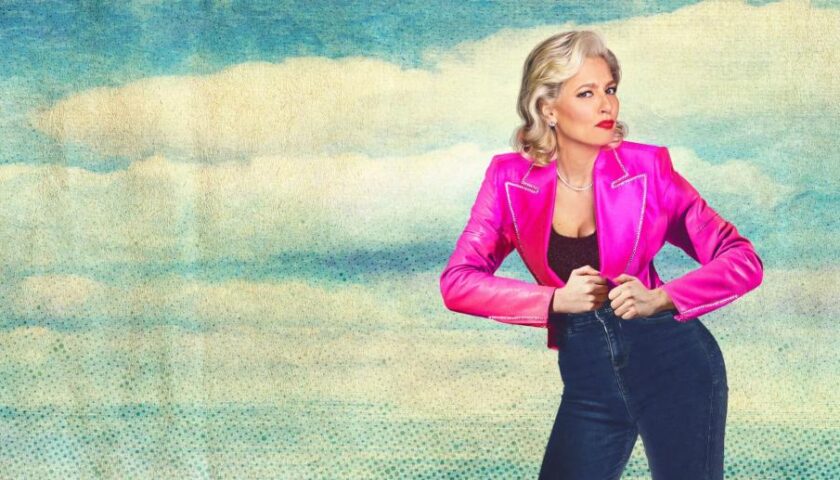 Christina Pazsitzky, or Christina P., had been an active crusader of the “mom cause” for more than half-a-decade now. A majority of her source material is often borrowed from her own personal experiences as a budding mother (and a seasoned daughter), of belonging to a much cooler Generation X, and of growing apathetic to many of the current social norms. And just as with her first Netflix special ‘Mother Inferior’, the jokes will hit home for those who sailing the same creaking boat of parenthood, and how a mother is subjected to the whole gamut of emotions while raising children.

But the new special is also starkly different in tone and feel for Christina P. carries a new sense of wisdom and casualness about herself when she walks on to the stage. She looks different, for starters, in her ravishing pink pantsuit and a cropped silvery haircut, and her usual boisterousness now seems aided by more warmth and kindness that one gains over time. The show starts off with a bang as Christina drops one punchy one liner after another about being constantly surrounded by male energy and genitalia at home (she’s married to fellow comedian Tom Segura and the couple has two sons), about postpartum depression, and also about her lack of any empathy for the millennials. However, the tone takes a surprising turn just before the half-way mark as she begins to share her own experiences as a daughter and how her muddled relationship with her Hungarian mother still remains close to her heart. It’s very rare that comedians risk such a sharp twist in the tone of their specials, let alone look inward while a large audience stares at them, but there’s a lot of honesty and candor about how Christina P. presents herself that one can’t help but be receptive. Despite the repetitiveness of her subject matter, the jokes are worthwhile for they come from a clean place.

“If you are not depressed after having a baby, you are mentally ill. First of all, you are fatter than Bert Kreischer…”

Christina P’s demeanor on stage is comforting, to say the least. Her material is raunchy but never vile, her rant is never overbearing but highly relatable, and her animated presence is smooth and delightful, akin to that of a radiant (also manical) preacher! Despite the strong undertones of womanhood, her set remains devoid of gender divisions but instead speaks about parenthood as a universal and unifying concept, one that is currently riddled with oversensitivity and bizarreness.

Christina also borrows a lot of the references from her own growing up years in the ‘80s. She’s evidently a staunch supporter of the Greed Decade and in a very Louis CK-esque manner, asserts that life was a lot simpler during her glory days, thus rolling her gleaming eyes time and again at the new and improved parenting standards of today’s times. There’s a lot of “measured” edge in her set that tries to push the boundaries and challenge the current generation’s liking for political correctness – take the word “detarted”, for instance, wherein she morphs a now-defunct word into something very catchy and usable.

“I grew up playing on scorching hot metal monkey bars in the middle of summer. And when I fell, it wasn’t onto foam or mulch, I fell onto a dead hobo…”

Parenthood and marriage aren’t novel concepts in comedy but what really sets a comedian apart is their perspective. On Netflix alone, there’s a wide range of comics sharing the most vibrant stories about being married or a parent – from Ray Romano to Jim Gaffigan or Wanda Sykes to fairly newer ones like Amy Schumer, the stories have all been relevant and super hilarious. In this vast pool of content, Christina P. creates her own little niche through her superb on-stage presentation and some brilliant writing. For those who seek an hour-long pleasure that brims with catchy one-liners and quirky insights into motherhood, Mom Genes is certainly not a letdown. The special was released on Netflix India on May 8th and was shot at Gramercy Theater in New York City.