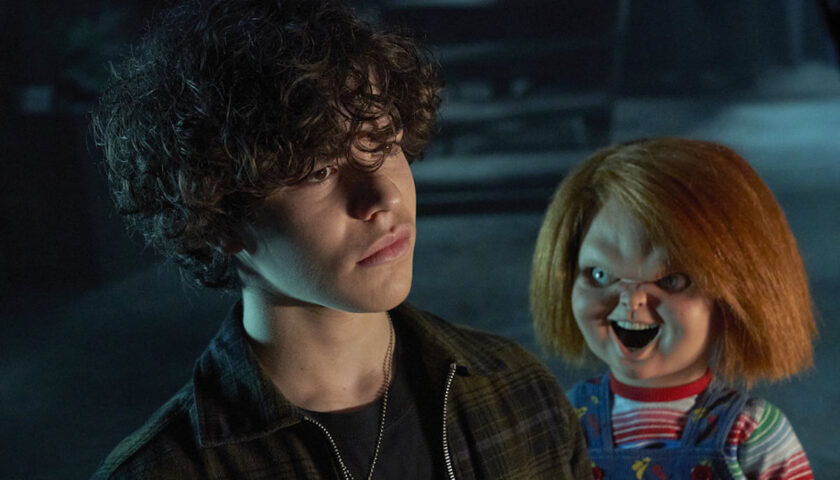 The Child’s Play franchise occupies an amusing position at the nexus of “blissfully simple” and “amusingly overcomplicated.” Chucky’s a doll. He kills people!

I’m not sure you need anything more than that to jump right into the franchise, though “He’s a doll inhabited by the soul of a serial killer through a voodoo ritual” is sufficient embellishment for the most casual of fans.

On the other hand, the Child’s Play franchise has extended into increasingly loopy and increasingly direct-to-video (or whatever the kids watch movies on these days) sequels involving other dolls, other killers, more voodoo and Jennifer Tilly.

There are hints that Syfy and USA’s Chucky might eventually get into the twisty and bizarrely meta world of the extended Child’s Play universe (I truly didn’t know that a movie called Cult of Chucky existed). But through the four episodes sent to critics, it tends, agreeably, toward the simple side of things. Hailing from Don Mancini, writer or co-writer of the entire franchise and the director of the last three installments, Chucky hits the small screen in somewhat padded form. It’s easy to focus on clumsy dialogue and a slew of flat characterizations, but if all you require in a Child’s Play TV show is the basics — a doll who kills people, occasionally creatively — then it delivers on that promise, also offering tiny bursts of nonmandatory inspiration.

The pilot wastes very little time getting down to the only business that matters. Middle schooler Jake (Zackary Arthur) stumbles upon Chucky, a Good Guys brand doll, at a yard sale in his New Jersey neighborhood. He pays $20 for it, which makes no sense because he has no apparent job — he’s 14 — and his father, Logan (Devon Sawa), is in such dire financial straits that his twin brother, Lucas (Sawa again), keeps offering him money (which he keeps declining).

Also, Jake is paying $20 for a doll he plans to dismember immediately, because Jake is a budding artist who makes creepy sculptures out of doll parts. His dad disapproves of that pursuit and disapproves of Jake’s completely matter-of-fact sexuality, which is defined by a crush on classmate and true crime podcaster Devon (Björgvin Arnarson). (The casual treatment of its gay lead character’s sexuality is surely the most interesting aspect of the show.)

Jake’s dad picks on him, but he’s hardly the only one. Cousin Junior (Teo Briones) and Junior’s saucy girlfriend Lexy (Alyvia Alyn Lind) bully Jake aggressively. If there’s a plus side to making a yard sale purchase of a doll inhabited by the soul of a serial killer, it’s that very soon the people who bully you are going to end up dead.

It takes very little time for Chucky to reveal his true nature to Jake, and given that Jake is a teenager with truly warped artistic impulses, it isn’t surprising that his immediate response is far more tolerant than your own reaction might be under similar circumstances. At a thus-far-steady rate of roughly one corpse per episode, Chucky gets to work, albeit with limited motivation.

You’d think that a show about a doll piling up bodies at a prodigious clip would have some sense of the escalating stakes, but Chucky really doesn’t. Although people soon begin to suspect Jake’s or Chucky’s connection to the mounting carnage, whole episodes go by where, other than the one mandatory kill, little happens other than people googling “Good Guys Doll Murder” and whatnot. The show is never boring or sluggish, but it’s frequently slack and meandering, doing to time what Chucky is doing to residents of Hackensack. The flashbacks to the origin story of Charles Lee Ray, Chucky’s malevolent occupying spirit, are often more intriguing than anything happening in the present day with Jake.

Anyone who sees Jake’s art would probably assume that he’s a budding serial killer. After four episodes, I’m still not sure if we’re supposed to find him sympathetic or disturbing. Arthur’s performance, at times weirdly intense, might point more to the former. Or Mancini might just enjoy starting his characters in extreme places — see also Lind’s Lexy, whose introduction is noxious enough to have audiences rooting for a small doll to slaughter surprisingly young kids.

It’s an odd thing that the main characters have been placed in middle school, where their approach to drugs and sex plays differently than it would for characters two or three years older. The teenage characters talk like they’re living in the ’90s and behave like they’re living in a paranoid corner of a 50-something screenwriter’s brain. In a series about a killer doll, is there any point in complaining about a lack of teenage verisimilitude, a hospital with strange Virgin Airlines mood lighting, or all the flat adult characters? Nah. But I definitely need Jennifer Tilly’s Tiffany to show up soon, because Chucky needs at least 15 percent more mayhem of the sort that she provides.

Honestly, anybody tuning in to Chucky is there for the doll. In that respect, the series delivers solidly. Brad Dourif is exemplary at capturing Chucky’s self-reflexive snark, and there were several lines of dialogue that made me guffaw, including a broadside attack on Westworld that I had to rewind multiple times. Chucky remains foul-mouthed, and the series provides an interesting case study in which words you can say on basic cable today, with the limit appearing to be a doll calling somebody the C-word. Good to know!

The violence is bloody but not gory. I’ve always found the franchise more funny than scary, and that continues here. The series is a tiny bit unnerving when it shows how humans interact with the doll, but when it’s just Chucky stabbing people with pointy objects — his versatility is captured in the various sharp implements that spell out the series’ title in the credits each week — I’m more likely to just giggle.

And that’s basically the show’s intent. Chucky with a butcher’s knife is to Child’s Play what mastiff drool is to Turner & Hooch: the primal nostalgic trigger. The Good Guys doll that Jake purchases has a high price tag because it’s a retro collector’s item, and I think that if the show has any theme, it’s that you should be careful of the things you’re nostalgic for, because they just might kill you. I’ll take that candor over Fuller House any day.