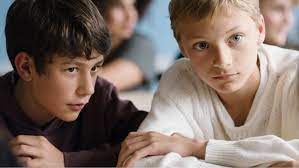 Close is a masterfully crafted look at the changing adoration shared between two adolescent boys. It is a skillfully written and directed by Lukas Dhont, who breaks the films into a classic three part narrative. Each chapter progresses though summer, fall, winter and then spring again and each depicts a new phase of the boys friendship. These changes are told with great effect and provoke emotions in the viewer ranging from joyful satisfaction and warm comfort to betrayed anger and even grief.

Close is set in the seemingly bucolic Belgian country side. And the film-makers take full advantage of the beautiful but labor intensive flower farm our one lead is growing up surrounded by. It is here amidst the farm’s blossoming glory we are introduced to the indelible adolescence friendship of Léo and Rémi. For the first third of the film the two are inseparable. Rémi who lives on the same road to town spends his days at the farm and Léo then stays over at Rémi’s most nights. Both are not yet burdened with chores of the rural life. So they get to idle away the rest of their last summer before secondary school in play and hi-jinx. Clearly this is how the friendship has been for a long while. And in that moment both would swear nothing could ever divide them.

The inseparable boys share a closeness that they manifest in a tactile intimacy with each other. This tenderness is nurtured by both families and particular by Rémi’s Mother, a maternity ward nurse, who also likes to cuddle warmly with the boys. As an audience we observe the tender support and devotion each offers one and other with natural questioning of their sexuality. We, at the Directors leading, begin to wonder if at least one of the boys feels more than just platonic love for the other. To be clear the film presents almost no spoken homophobia from its many secondary characters to this possibility. The film is clearly set in present day Belgium. So much so even the main sport depicted in the film is hockey. So when at the end of summer the two are still inseparable amongst their new classmates. The fellow students although immature respond mostly with curiosity or disinterest to this possibility. But as the film’s setting shifts fully into the classrooms and court yard of a new larger secondary school, some adolescent bullying and unwanted attention increases. The boys begin to question if new personal boundaries are being laid out. Sadly this effects one boy more than the other but both must deal with the consequences.

As you might imagine for a film like this to succeed the two actors playing Léo and Rémi, need to be thoughtfully cast and very talented. And Eden Dambrine who plays the thoughtful Léo and Gustav De Waele who portrays the talented Rémi do so with skill beyond their years. Their performances are without truly fault. But some might find Léo’s cold unemotional response to the third act hardships as disconnected from the warm Léo we’ve been introduced too. This can be explained by the circumstances. But when the suppressed emotions are final dealt with in a wonderfully written climatic scene, one almost feels the response is just a little off the mark. And this is only notable because you do spend most of the third act waiting for this moment.

Close is well deserving of the critical praise it is receiving at top European festivals. And like the film’s plot which moves us from one season to the next it will be interesting to see if the film can find as much praise in an english theater market.

I do want to end on a small spoiler. This film does not end in a feel good moment but rather one that is as harsh and honest as the rest of the third act. It deals with real complex subject matter and young viewers should be prepared for truly sad story shifts.