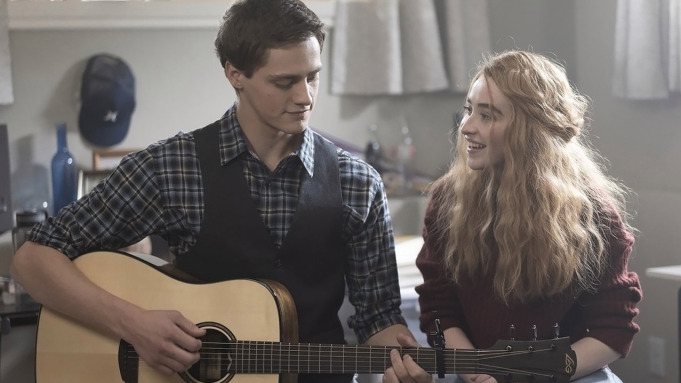 Based on the true-life story of Zach Sobiech, a Minnesota teen and musician who died in 2013 of a rare bone cancer just weeks before his senior prom, “Clouds” has all the makings of a profound and powerful heart-tugger. So why isn’t it more wholly moving and cathartic?

It’s no fault of its stars, including a charismatic Fin Argus as the spirited Sobiech; Sabrina Carpenter, a standout as Sobiech’s lifelong pal and songwriting partner, Sammy; a fine Neve Campbell as his mom, Laura, whose faith-based memoir was adapted into a more secular screenplay by Kara Holden (story by Holden, Casey La Scala and Patrick Kopka); and Lil Rel Howery as Sobiech’s enjoyably garrulous teacher.

But at a distended two hours, the film becomes a bit of a slog as it deliberately tracks Sobiech’s senior year of high school as he bravely marches — with equal parts humor and sorrow — toward his demise. (The boy’s fate is sealed from the start, so mystery and tension are off the table.)

Director Justin Baldoni, an actor (TV’s “Jane the Virgin”) who also helmed 2019’s teen-disease drama “Five Feet Apart” plus a 2013 documentary short on Sobiech (clips from which play at the end here), shows genuine respect and love for his characters. But scenes tend to unfold as if being ticked off a list — Sobiech receiving a grave diagnosis, attending a Jason Mraz concert, signing a recording contract, performing his pleasant folk-pop tunes, becoming a YouTube sensation, composing his peppy signature hit “Clouds” — rather than as organically woven retelling.

Although it actually happened, a last-ditch family trip to the healing waters of Lourdes, France (no spoiler: they didn’t work), proves an arcane, disruptive segue.

What should be the beating heart of the movie — Sobiech’s romance with sweet classmate Amy (a luminous Madison Iseman) — can feel choppily told and overly dutiful. The pair’s frequent, on-the-nose pronouncements of love and devotion may elicit eye rolls from more jaded viewers, though could strike chords with sensitive teens.

The film also could have dug more deeply into the fraught dynamic between Sobiech’s mom and his dad, Rob (Tom Everett Scott), as they go through a parent’s worst nightmare.

That said, the movie’s plainly stated theme, “You don’t have to find out you’re dying to start living” is, of course, valuable and super-timely. And exposing younger audiences to some straight talk about peer-aged mortality, if not everyone’s cup of entertainment, is a vital discussion to be had.