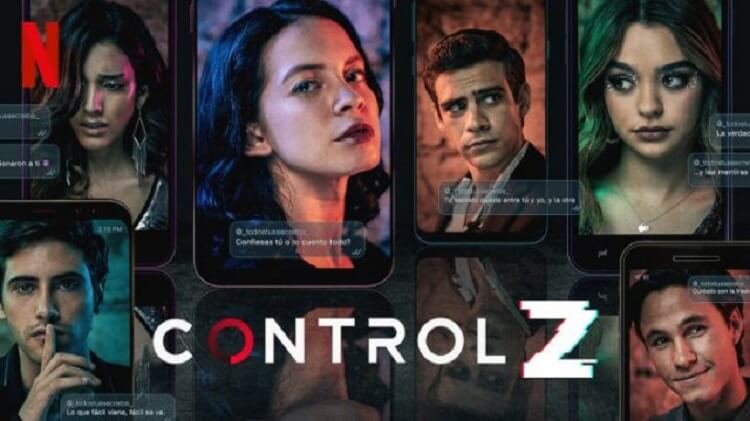 Episode 1 of Control Z Season 2 begins with Javi bleeding out. The NONA is over and Sofi rides the ambulance while Javi’s life hangs in the balance. The boy survives, of course, despite some fake-out montages involving a funeral that would suggest otherwise.

We’re two months later in the story and Luis’ death still hits the students hard. Quintanilla prepares for a ceremony as all the kids take their place in the assembly hall.

It doesn’t take long though before another hacker strikes. All the phones start crackling, with a message rocking up asking to bring Gerry to him. Whoever this person is, they also repeat the mantra of “You can’t bury the past.” You’d think the school would have invested in better WiFi infrastructure after the first season, right? Well, for now it gives Sofia enough incentive to look into this.

When Javi does return he’s like a celebrity and all the kids are super nice to him. However, there’s still the ensuing drama spilling over from season 1, including the situations involving Pablo and Natalia.

When Sofi returns home, she finds herself coming to blows with her Mother, Nora. Nora is understandably not happy that Sofi has kept the reveal of her Father being alive a secret all this time. She pleads with Sofi to know more but instead her daughter leaves and heads over to Javi’s place instead.

Once there, Sofi admits that he’s very special to her. Sofi’s powerful tools of deduction (they’re not that powerful, in truth) make her realize Javi is going to kiss her. However, just before they do, the pair receive another message from the hacker. They’ve captured Ernesto and Dario, who both earlier received a pizza from a delivery driver, despite not actually ordering it themselves.

A phone call to the two boys is enough for Sofi to solve what this riddle means. Dario and Ernesto are buried somewhere and the sound of fireworks helps her work out exactly where. They’re in a church graveyard, of all places, prompting the pair rush over.

A drugged security guard nearby confirms they’re in the right place. With 3% battery left on their phones, the pair scramble to try and find the site Ernesto and Dario are buried.

While this is going on, Natalia heads over to the dealers and mentions the issues she’s had selling drugs at the NONA. Jordi is beaten badly for this, prompting Natalia to come to a new deal.

Back at the church, Javi and Sofi eventually find the right site where Dario and Ernesto are buried. They free them from their casket and thwart the threat. Both are oxygen starved and struggling. Thankfully, they’re both still alive.

However, a message inside the casket rocks Sofi: “You shouldn’t have let him out.” It’s another clue but is this in relation to freeing the pair or linked to something else entirely?

Either way, a mysterious figure ends up watching them from across the graveyard, prompting the pair to take chase. After knocking out Javi, he hurries over to his bike and takes off.

A new season rolls round and both Sofi and Javi get a taste for this new hacker’s notorious plan. The graveyard scheme serves as an ominous tease of what we’ve got coming up, with a much more driven and action-packed opener compared to season 1

Following the fallout to the finale, this second season has wasted little time getting right to the heart of the drama. With a new hack and lots of possible suspects, this opening chapter leaves lots of question marks hanging over the story going forward.