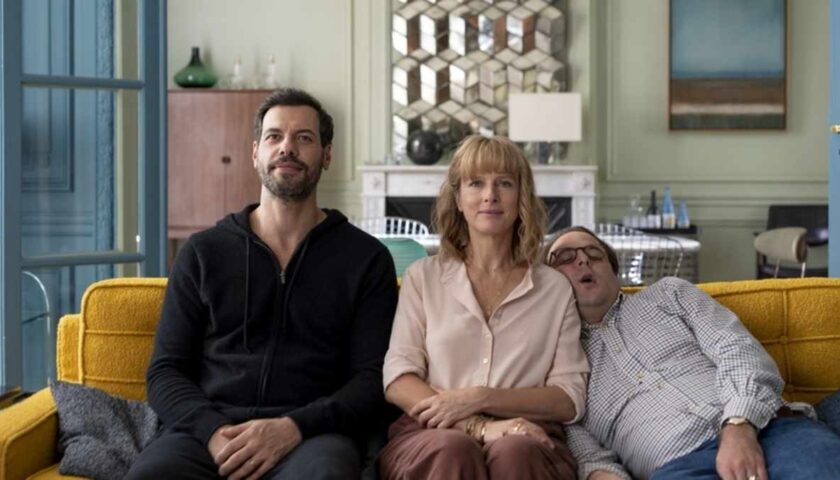 OUTER SPACE. Planets, comets, galaxies and the like. Don’t worry, all this might make sense in a minute here, but no guarantees. On Earth, it’s pitch black on our teevee screens, maybe like a starless void, as we hear the sounds of adult humans having sex, which concludes and quickly descends into postcoital bickering. I think the empty space we see symbolizes the empty space between Jean-Louis (Lafitte) and Valerie (Karin Viard). They’ve been together 17 years, which is about the point where married people begin leaning on the wedges that drive them apart instead of bonding over the things they have in common, but also, he didn’t finish and she only pretended to, which sure is a double-whammy of a physio-psycho-sexual problem.

We know this much about Jean-Louis: He plays the piano and is a lawyer, a legal fixer. He hasn’t spoken to his mother in four years for vague reasons. He’s 42 and Valeries is five years older than him. And he no longer has a pulse. No, seriously. He’s breathing and talking and standing there, but there’s no heartbeat. He notices it one day when the treadmill says BPM 000. He confides in Michel (Vincent Macaigne), his closest friend since childhood, who confirms that, yes, he’s dead but not dead, but what does he know, he’s just a veterinarian.

Just as Michel is about to take Jean-Louis to the hospital for some tests, Valerie comes home. Their plan was to not tell her because they’d rather take the scientific doctor route than her crackpot “wellness” wheat-germery bologna: She’s one of those people that “stroke vegetables” and “take ocarina lessons,” Michel flusters. Valerie locks Jean-Louis in the house and hides the key, which is a conceit that works because they’re in France, I guess. So he fesses up. She presses on his wrist and places her hand on his chest. Nothing. She takes him to her mystical guru, Margaux (Nicole Garcia), who goes on about his “cosmic heart” (Outer. SPACE!) and manages to convince him that the only way he won’t be officially dead as dirt in three days is if she gets to see his mother’s vagina. Doesn’t have to be in person, a photo would work.

Dear Mother trods the type of uncomfortable territory – some of it Oedipal, some of it just flat-out surreal – that will make some folks squirm, fidget and/or tut-tut while clutching their pearls. It crosses a line or two into bad taste, but please note that “bad taste” isn’t the same as “no taste,” which is pointless in its offensiveness. I believe Lafitte and screenwriter Sebastian Thiery aim to slash apart the pseudoscience of the “wellness” industry, the Goops and the like, with razorlike satire, using an endearingly strange midlife crisis scenario as its basis. Not all the jokes land, but tonally, this thing is so off-kilter, so profoundly psychotic, it’s hard not to admire it.

In an early scene, Lafitte makes a point of establishing Jean-Louis and Valerie’s lifestyle in a series of still shots of their many very nice things inside their very nice home, all the matchy-matchy stuff of people who are miserable and have it all and, with their food and shelter needs met dozens of times over, are searching for something a little more than the corporeal. Something “spiritual,” perhaps, something that you can’t see but is also quite expensive but nevertheless affordable for people of their comfortable cachet. So relish the irony of a man with a dead heart showing his true self as he tries to revive it by violating the sanctity of his own mother via a series of ridiculous manipulations that involve all manner of things that aren’t telling the poor woman the truth – a truth that isn’t really anything resembling truth at all, but high-order hokum.

All this requires Jean-Louis to manipulate his otherwise reasonable friend into helping, because Michel has failed at many things, but doesn’t want to fail at saving his best buddy’s life. Valerie goes along with it, of course, because she subscribes to the hokum, and would double down on it in the face of something resembling legitimate scientific evidence to the contrary. And so Lafitte makes us profoundly uncomfortable at times, sometimes because we’re simultaneously laughing and aghast. The thought crossed my mind that Jean-Louis could have just flat-out told his mother that she could save his life by simply lifting her skirt so he can snap a quick pic, and she might just oblige. Then again, she’s of a generation that just got their damn shots and didn’t even know what colloidal silver was.