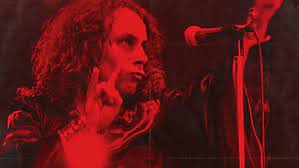 The first time you listen to Ronnie James Dio’s singing you feel like you’ve discovered the Holy Grail. I’m convinced his voice could slay dragons and make volcanoes erupt — there’s nothing like it. Behind that glorious metal voice was a beautiful soul who sang about dreams and uplifted those around him while never sacrificing his essence. Twelve years after his death, Don Argott and Demian Fenton celebrate the life and work of this music legend with the comprehensive and ass-kicking documentary Dio: Dreamers Never Die.

Just as Dio was a perfectionist, this film tries to leave no stone unturned as it takes us all the way from the singer’s life growing up in Cortland, New York and his first incursions into music to his battle with stomach cancer and eventual death in 2010. You learn about the origin of the famous devil horns (Dio’s signature hand gesture), Dio’s rise with Rainbow, his arrival to and impact on Black Sabbath, the formation of Dio the group, and many fascinating behind the scene tales about his personality and remarkable occurrences throughout his career. Fans of Tenacious D will not be disappointed: Jack Black’s story about the recording of Dio’s epic cameo in Tenacious D in The Pick of Destiny will rock your soul.

Argott and Fenton use a combination of footage and interviews to tell their story, but unlike recent works like Tony Hawk: Until the Wheels Fall Off (2022) that get disappointingly stuck in the conventions of the traditional footage and interview documentary form, Dio: Dreamers Never Die is full of energy thanks to the way the directors play with audiovisual elements. If they have a photo on screen, they twist it, move it, or zoom on it; they hit you with simple, yet effective kinetic typography animation of Dio’s lyrics to reinforce the exploration of certain themes or moments; they illustrate interviewee tales with sensational recreations (the one regarding the photoshoot of Holy Diver’s cover is pure gold); and there’s a cornucopia of footage, from Super-8 clips and concert recordings to old Dio interviews and official music videos. Fenton’s crisp editing joins everything together to create an engaging film that always has time to take a breath and reflect on the difficulties in the subject’s life. It also helps that the music kicks ass.

The talking heads cast is absolutely stacked. We have: Dio’s widow, Wendy; biographer Mick Wall; historian and radio host Eddie Trunk; rock legends (some of which played with Dio) Rob Halford, Lita Ford, Tony Iommi, Geezer Butler, Sebastian Bach, Roger Glover, Rudy Sarzo, Vinny Appice, among many others. And, of course, Jack Black, whose energy and passion while talking about Dio is contagious. These figures chronicle Dio’s life and nourish the documentary with fascinating facts and tales that give us as much intimacy into what his life and personality were as possible.

Along the way, the film makes sure to stop at every roadblock in Dio’s career to reflect on their impact. His rise to fame was a rocky one mainly due to his unwillingness to change his style: Dio always remained authentic and refused to sell out to the pressure of new trends. Furthermore, Argott and Fenton make sure to highlight how Dio always used his music and personality to try to uplift others; he sang about dreams, never giving up, and standing up for oneself. He was beloved and tried to be a role model for those who looked up to him.

Dio: Dreamers Never Die does lack a deeper exploration of certain themes. For instance, it would’ve been enriching to learn more about Dio’s fascination with books and medieval subjects and their influence on his songs, as well as how he developed his spectacular theatrical image and stage presence. But there’s only so much you can fit into 112 minutes.

After such an epic retelling of a legend’s life, Dio: Dreamers Never Die goes into emotional territory when it’s time to talk about his death. Because Argott and Fenton do such an excellent job of proving the importance of Dio and his positive influence on others, it doesn’t matter if you are a metalhead or if you have never heard the name Ronnie James Dio before hitting play on this doc, you will feel the emotion of his peers and loved ones by the end of the film. More than that, you will also learn why he was a rainbow in the dark for fans and musicians alike.